Democrats Get a Boost From Court Redistricting

District 25 will now be more rooted in Travis County, yet also more conservative 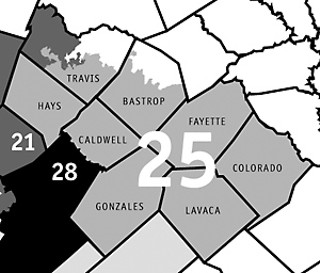 The three-judge panel that re-re-redistricted our part of the state last week did away with Austin Rep. Lloyd Doggett's "fajita strip" that stretched all the way to the Mexican border, making the new District 25 strictly a Central Texas constituency anchored in South Austin. According to 2004 election totals, 60% of the district's voters reside in Travis County.

A federal three-judge panel on Friday released a map of new congressional districts for the southwest quadrant of Texas to remedy violations of the Voting Rights Act that the U.S. Supreme Court said were committed by the old maps that former U.S. House Speaker Tom DeLay pushed through the Texas Legislature in 2003.

Specifically, the court was ordered to redraw District 23, the configuration of which had diluted Hispanic voting strength in South Texas. Although the judges said they tried to make changes as minimal as possible, the altered boundaries of 23 had a ripple effect that required changes in districts 28, 25, 15, and 21. Because these districts are no longer the same ones voted on in March primaries, the panel ordered that "open primaries" for those seats be held in conjunction with the 2006 general election on Nov. 7. Any seat which does not produce a majority winner will be settled in a run-off on a date yet to be announced.

While the thrust of the court remedy centers on District 23 – Hispanic voting strength was restored by reuniting Webb Co. within the district, whereas it had previously been split with District 28 – on this page we explore how the changes affect Austin, specifically District 25. – Lee Nichols

The newly drawn congressional map may be great for the Democratic Party, but it can be hell on the incumbents who will face a much tougher road this campaign season.

Take Rep. Lloyd Doggett. Last Friday, Doggett was told he now represents a 25th Congressional District that – while Travis County-centric – clearly tilts more to the right. As Doggett calculates it, 200,000 people in this new district have never seen Lloyd Doggett's name on a ballot and about half were not part of his district last Thursday.

And though Doggett now represents most of Travis Co., the lines are drawn in ways that aren't necessarily to his advantage. Doggett points out that he represents half of Lakeway, but he doesn't represent the neighborhoods around his alma mater, the U. of Texas. Doggett represents the small towns of Hallettsville and La Grange, but not the neighborhoods on Barton Springs Road.

"People wanted me to represent Travis County, and it's enthusiasm that I very much appreciate, but this is a district, as it's drawn, where Bush defeated Gore without a recount," Doggett said. "It's a very strange configuration, and one I'm determined to make work, but it does entail significant effort and significant campaign resources."

And Doggett is determined to make it work. Just as he made sure places like George West, Freer, and McAllen tripped off his tongue two years ago, he now must make sure his vocabulary includes San Marcos, Lockhart, Fayetteville, and Schulenberg, all while wondering whether a serious Republican challenge is imminent. (He's already drawn at least one opponent, Lockhart chiropractor Grant Rostig, who describes himself as "a Liberty-Republican, following in the footsteps of Ron Paul," the Libertarian-turned-Republican congressman of District 14.)

"It's a challenge that I accept, but it's a challenge," Doggett said. "I don't think my victory should be declared before the votes are counted. There's going to be a great deal of work necessary in many small towns over a wide expanse of territory." And Doggett's trekking that wide expanse of territory, even while half his staff and constituents remain firmly anchored in McAllen. On Monday, Doggett opened a campaign office on Third Street in Austin. Wednesday, he was walking blocks in San Marcos, trying to rebuild name identification in a town he has not served since his days as a state senator more than two decades ago.

The challenge is both political and practical. Doggett and others under the redrawn map are losing constituent relationships they spent two years trying to build. Rep. Rubén Hinojosa (District 15), who swapped a number of rural counties with Doggett in the new map, expressed his regret at losing Bastrop, Caldwell, Lavaca, and Colorado counties.

"This change is another example that rural and emerging communities have been needlessly reshuffled to pay the price for constant redistricting at the whims of political power shifts in the state," Hinojosa said after the decision. "I will continue working to the best of my ability to represent South and Central Texas, and it is my sincere hope that the good people of Texas won't have to endure this type of political gerrymandering any time in the near future." – Kimberly Reeves

Travis Co. Democrats declared victory last week when a federal panel of judges released its new redistricting maps, and for good reason – no incumbents were pitted against one another, whereas the map proposed by Attorney General Greg Abbott would have pushed Austin Democrat Lloyd Doggett's District 25 out of Travis Co., and carved Travis up into districts currently represented by Republicans Lamar Smith, Henry Bonilla, and Michael McCaul. Instead, District 25 remains anchored in Travis Co., but no longer stretches all the way to the Mexican border. While that's good for the simple principle of representative government – basic logic should point out the absurdity of pairing Austinites with McAllen residents 300 miles away – it's a double-edged sword for Doggett. He'll have his Rio Grande Valley Hispanic support replaced with rural Central Texans from the former District 15, who probably would rather not be represented by one of Congress' staunchest liberals, and by residents of southwest Austin and Hays Co. from Smith's District 21 and the former District 28, which include several solidly Republican boxes.

The Chronicle performed an analysis of the new District 25 vs. the old one (see right), based on vote totals from the 2004 congressional election. It's an admittedly imperfect study – four of the 2004 Travis precincts are now split between districts 25 and 21, which throws off our totals slightly, and of course this study can't account for the differences between strong and weak candidates. Nonetheless, it is obvious that Doggett is now in a somewhat more competitive district. – L.N.

Vote breakdown of the new District 25 by county

* Indicates counties that were also in the old District 25