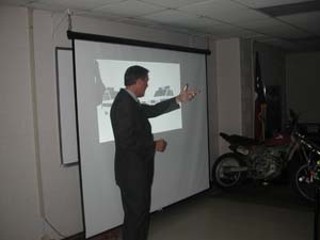 District Attorney John Bradley stood next to the dirt bike on which Thornton took his last ride. They thanked reporters for their "patience." "This is one of the most well- documented shootings I have ever seen," Bradley said. (Photo By Patricia J. Ruland)

Joe Vinson Thornton died with a dream, and two bullets in his heart. The 29-year-old's childhood wish to go out in a "blaze of glory" (as he told a friend) was fulfilled on June 16, when he drew a gun on two Williamson Co. Sheriff's deputies after a chase in a cornfield east of Georgetown. The deputies fired 12 shots, hitting Thornton five times.

Police found $2.06 in his pocket and methamphetamine in his system. He was a wanted man, with a protective order filed against him by his own mother. "Something else had taken control of his life," Thornton's father told police. "It's always a loss," said Sheriff James Wilson, adding he regretted the deceased had not had contact with mental-health services.

On June 20, a Williamson Co. grand jury no-billed Lt. James David and Deputy Barry Simmons in the shooting death. The sheriff's office called a press conference that day, to announce the ruling and to release copious details, including, for the first time, the officers' names. The department had been criticized, especially by the Austin American-Statesman, for waiting so long; the state attorney general's office is considering a complaint that WCSO filed an incident report late.

The press conference was a multimedia production, including a PowerPoint presentation on use of force, two-camera police footage of the shooting, and a 2-inch-thick batch of documents. Wilson and District Attorney John Bradley stood next to the dirt bike on which Thornton took his last ride. They thanked reporters for their "patience." "This is one of the most well-documented shootings I have ever seen," Bradley said. According to Bradley, the department had withheld information to prevent public censure and protect the integrity of the investigation. But most departments, including the APD, routinely release the names of officers involved in a shooting.

"I don't get into what other departments do. I work for Williamson County. Our standards are different," said Detective John Foster, WCSO public information officer.

The documentation exonerated the officers. "It looked like 'suicide-by-cop,'" said Detective Mike Sheffield, president of the Austin Police Association. Sheffield says he sympathizes with WCSO, as the media has "vilified" APD officers involved in shootings. It's arguable, however, that withholding the names did a disservice to officers by suggesting they might be hiding something. If the case is so clear-cut, why the secrecy?

Included in the press packet were numerous commendations, including poignant handwritten letters thanking Simmons for his kindness. Only Simmons will have to bear any unresolved negative publicity – documents said he'd been put on probation in 2002. However, Derek Howard, Simmons attorney, questioned the release of that information. "The sheriff immediately overturned that action. WCSO knows this," Howard said. So should the media – a memo to that effect was also in the packet.