With stacks of ruined gambling evidence, the city, the county, and the APD are eagerly pointing fingers 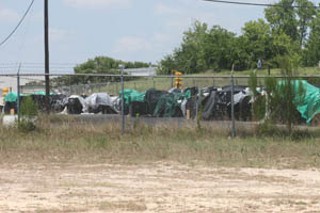 Nearly 1,000 eight-liner gaming machines have been sitting for more than a month, exposed to the elements, on the edge of the Austin Police Department academy driving course. The machines, allegedly used for illegal gambling, were seized by police during a citywide raid in June. (Photo By Jana Birchum)

In early June, the Austin Police Department made headlines when it announced the largest seizure of illegal gambling machines in city history. Just after 10am on June 8, Austin police, with help from Travis Co. Sheriff's Office deputies, hit a string of 23 "gaming rooms," seizing nearly 1,000 eight-liners – slot machine-like equipment with screens that display a tic-tac-toe configuration, offering gamers up to eight ways to win on a single play. The raid – dubbed Operation Flatliner – was prompted by citizen complaints and by the number of robberies police say are associated with the rooms. In 2005, police reported 26 robberies at game rooms, although detectives suspect more went unreported; as of June of this year, police recorded 10 game-room-related robberies.

The individuals facing jail on illegal gambling charges are yet to be prosecuted, says Travis Co. Attorney David Escamilla, because his office is still investigating. But meanwhile, some of the evidence of the alleged crimes – that is, most of the gaming machines – may have been inadvertently destroyed. For more than a month the nearly 1,000 eight-liners sat outside, on the ground, exposed to the weather – save for a network of green tarps draped over them– on the driving course at APD's training academy in Southeast Austin. So the electronic machines, whose sides are made of particleboard, have been exposed to the elements – both rain and heat. Whether they still work is anybody's guess.

Why were the machines left outside for more than a month? The answer depends on whom you ask. Assistant City Manager Rudy Garza says he was told that Escamilla's office had "accepted responsibility" for storing the eight-liners, but failed to secure space to do so – a circumstance Garza says the APD was not informed of until shortly before the raid. The County Attorney's Office allegedly told APD, "Oops, [we] didn't secure a location," Garza says, but that APD "had to continue" with the planned raid. Once the machines were seized police "had nowhere else to put them but at the academy," where they remained for weeks. "It's my understanding that [the machines have] gotten wet," Garza says, "but we rented a huge tarp and we don't know if they're damaged or not." If the machines are damaged or destroyed – which appears likely – it isn't the city's fault, Garza said, because "the other agency was not able to fulfill what they said they'd do."

Escamilla's version is rather different. In the weeks before the raid, Escamilla says APD asked (likely by Cmdr. Duane McNeill, who was actually in charge of Operation Flatliner, according to APD spokesman Kevin Buchman) whether the county would be able to store the seized machines. Escamilla says he told the police he didn't think that would be possible but that he funneled the question to the county officials for a final answer. And "they said, 'No,'" Escamilla recalls. Escamilla says police told him they'd "handle" it on their own.

Under state law the agency that does the seizing is normally responsible for safekeeping any evidence, and under APD policy, it is the "duty and obligation" of police to "properly seize, control, care for, store, process and dispose of property and evidence that may come into their possession." The policy mandates that evidence be collected in a manner "conducive to maintaining its integrity." Buchman insists that the department is "pretty confident" that they've handled the machines properly, and any weather damage "isn't important" because the machines were "pretty much damaged during the [raid]" because officers had to break into many of them in order to "secure the money" inside – "that's what's important, the money inside the machine," he said.

Yet the machines aren't city property unless the accused are ultimately convicted – isn't property destruction before the fact a problem? Buchman told the Chronicle that McNeill would have to answer additional questions; McNeill said that after Escamilla's office failed to secure space for the machines, as promised, the county attorney approved McNeill's backup plan to wrap and store the eight-liners outside. In short, he said, the whole dustup is really a nonissue.

Possessing the machines isn't illegal, but using them for cash-prize gambling is. (Their only legal use, the Texas Supreme Court has ruled, is to award noncash prizes worth no more than $5 or 10 times the cost of a single play, whichever is less.) The raided establishments were allegedly dealing in cash, and lots of it; police say some of the rooms were pulling more than $5,000 per day. But that is still an allegation that needs to be proven, and until that happens, the machines aren't the city's to destroy. And even should the owners be convicted, in theory the authorities could resell the machines to legitimate vendors – if they remained functional.

Escamilla says that while it would've been better not to leave the machines outside, the current state of the equipment won't have any effect on his cases. He says there are just 32 machines directly related to his cases – machines specifically identified by undercover police who gambled at the various establishments in the weeks prior to the raid – and they've been kept under lock and key with the county. Therefore, the hundreds of machines at the academy aren't technically considered evidence in his office's cases, he says. "This was a successful raid, [with just] one black mark," Escamilla said. "The one problem with eight-liner [cases] is that the logistics are staggering."