Think about the joggers! 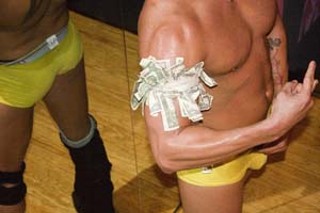 It may seem like a no-brainer – La Bare is a club where guys do sexy dances in their underwear. Wouldn't anyone call it "adult-oriented"? City officials say they would – and as such, the Riverside club is just a hair too close (under existing ordinances) to both the Town Lake hike-and-bike trail and the Texas School for the Deaf. Kevin Cox, the appropriately named owner of Austin's only ladies club, disagrees. Yes, the zoning code forbids "Adult-Oriented Businesses" from operating within 1,000 feet of a school or public park; but no, he says, La Bare is not an AOB. And while he faces class C misdemeanor charges for the zoning violations, the city faces an injunction plea from La Bare to knock it off. La Bare's injunction goes to court Aug. 7; Cox's court date hasn't been set yet.

According to La Bare attorney Jeff Kelly, the city had its chance to classify the club as an AOB last fall, when Cox began the Texas Alcoholic Beverage Commission alcohol permit process. "If they would've done that at that time, we wouldn't have been damaged," says Kelly, "because we would've automatically been kicked to a TABC administrative hearing."

Instead, the club's permit application, despite acquiring zoning and APD approval in October, has been in a "holding pattern" for nine months. "Our hand was forced," says Kelly. "We had to file."

Without a liquor license, La Bare has operated on a BYOB basis since its Dec. 30 grand opening. The bartenders serve the occasional soda or setup while the waiters, in their white tux blouses and black bow ties, wander among the tables like eager busboys. Meanwhile, an apologetic sign at the door announces a "temporary" $20 cover. "We're just trying to keep the lights and the phone on," says Cox.

That was easier at the La Bare franchise in Dallas, where Cox worked for 25 years. It's classified as a bar – just like Austin's club was during the permitting process, and just like Oilcan Harry's or Coyote Ugly, where wet underwear contests and body shots could be considered more salacious than what happens at La Bare, Cox argues. The comparison isn't lost on the club's clientele. "I can get more bump and grind at a bar than I can here," says Teri Kilgore, a regular at the club, who prefers La Bare to other bars "because here guys don't grab you."

You'd think a quick review of La Bare's dancers would help clear up the debate. La Bare is not the male-dancing equivalent of a female strip club – where you're unlikely to see a dancer wearing knee pads and showing off her popping-and-locking skills, as featured La Bare dancer Kal and his hard-bodied colleagues did last Saturday night. Perhaps surprisingly to those hapless innocents jogging along Town Lake, a lot of the performance at La Bare is pure Justin Timberlake, and even the groin thrusts don't surpass standards established by Elvis or Michael Jackson.

It's unclear, however, whether the sexual innuendo built into the La Bare scene – a dancer dressed as a cop accused a bachelorette of violating a "penile code" during a performance last Saturday, for instance – really counts as mimicking a sexual act. Also, the officers who visited the club say they saw lap dances, which could be construed as violating the city ordinance. Kelly says he has exonerating video footage from the night in question, as well as corroborating affidavits from women who were there, many of them for a birthday party. Parties make up a large part of La Bare's business – at least half of last Saturday's crowd was there to celebrate birthdays and weddings, and they'd decorated their tables with balloons and streamers.

"They keep apologizing that it's BYOB," said Angie Hagar, who was celebrating her friend's bachelorette party. "But we like that. I just don't like that you can't touch the dancers." Regardless, she said, "We definitely need a club with men dancing in Austin." 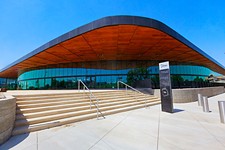