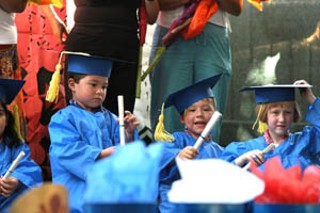 If there is a cloud of foreboding over the 200 block of Congress Avenue, you couldn't tell it from the happy and noisy festivities Friday evening, behind the Copa Bar & Grill. A couple of days before, the formal announcement had finally come that the Finley Co., owner of most of this block, had indeed signed a long-term lease to White Lodging Services Corp., which plans to build a multistory hotel complex on the site (see "My Migas, My City," July 21).

Nevertheless, a couple hundred parents and relatives crammed the Copa's patio to celebrate the "graduation" of all the preschoolers at Escuelita del Alma Learning Center, which on most days keeps school next door. One class after another of the multicultural, Spanish-immersion day-care center marked the august occasion by singing and dancing in honor of tortugas (turtles), abejorros (bumblebees), and several other miscellaneous fauna. The youngest niños jumped up and down with abandon, the eldest (students range from infants to pre-K) flourished a hip-swinging assurance; very few froze at the sudden appearance of an actual adult audience outside the curtain. Only one poor, overwhelmed bumblebee howled at the prospect of all those suddenly unfamiliar faces beyond the stage. "This kind of diversity is Austin's future," said Jim Walker, who, with his wife Scheleen, was among the applauding parents braving the evening heat to watch their youngsters perform. (Four-year-old Jimmy Boone Walker was a most graceful tortuga in green and white.) The Walkers have helped organize an Escuelita parents group in hopes of finding some accommodation with the planned hotel development. "No one is against development," Walker said. "The larger question is how can we work with that development, the result of our own success, to preserve what has sustained Austin? We need to engage in that bigger conversation."

Last Wednesday, the Statesman published a rendering showing three Marriott Corp. hotels proposed to fill the block where Escuelita, Las Manitas Avenue Cafe, and Tesoros Trading Co. now stand (along with a couple of other buildings, including Copa, not directly subject to the project). At least in the proposed version, it is not apparent what might happen to the existing small businesses, although White Lodging President and COO Deno Yiankes told the daily, "As hotel owners, we will directly benefit by successfully working with these longstanding and important institutions of downtown Austin as they are a significant part of Austin's unique flair that keeps so many visitors and conventioneers coming back year after year." The company's local representative is Armbrust & Brown attorney Richard Suttle, who did not return calls requesting comment but has invited the existing business owners to meet with him to discuss how they might be accommodated in the new development. Dina Flores, director of Escuelita del Alma, said she hopes to meet with Suttle soon.

White Lodgings vice-president for communications Judy Bronowski described the project as "in the early stages," and with three hotels (1,000 rooms in all) designed by HOK Architects, it will be among the largest projects the company has undertaken. Ground-breaking is planned for next year, with a scheduled hotel opening for summer 2009. She reiterated that the company hopes to "get all the parties together and figure out what is best for everybody involved," emphasizing that White has "a pretty big presence" in Austin and intends to be a good corporate citizen. (The company's Web site lists 14 Austin hotel properties, managed for Marriott-related chains.) Because of the company's broad experience here, Bronowski said, "We understand the unique place and environment [of Austin], and we want to do whatever we can to help maintain that."

For their part, Walker said the business owners and the parents group hope that a "win-win" can be worked out with the development project, promoting economic progress for Downtown while preserving the unique character of the city's multicultural threads. He emphasized the special nature of Las Manitas and Escuelita – "there are only two or three day-cares in the city that offer Spanish immersion, and that's increasingly a necessary skill" – not to mention the opportunity for children of all racial and economic groups to attend school together. For Walker, the situation raises a larger question about the city's priorities and future.

"We've got to get more serious as a community about that question," Walker said. "It's not even primarily a city-politics or City Council question. It's a question of what kind of community do we want to have. … It's for all of us. We can't just throw up our hands and say, 'Well, it's the market doing this,' and let irreplaceable cultural institutions disappear. Now it's Las Manitas; what happens next if it's the Hoffbrau or Katz's? If the city can't do it [preserve them], then the community should."