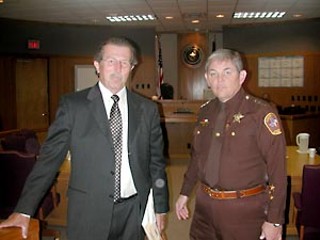 Last Friday, July 14, Judge James Clawson Jr. ruled for the third time in favor of Williamson Co. over Constable Gary Griffin, granting a motion for summary judgment in the 368th District Court. Had Griffin prevailed, his lawsuit accusing the county of illegally cutting his budget after adoption would have commenced on August 25. Instead, declared a defeated but undeterred Griffin, "We're going to Austin" and the 3rd Court of Appeals. "I haven't had my day in court yet." To the county, Griffin's suit is over. To Griffin, it has just begun.

"This case will be historic," said Griffin's attorney Bill Aleshire, former Travis Co. judge. Griffin sued Williamson Co. and its Commissioners Court because the court gutted his office budget after he redeployed mental-health deputies to other duties on October 19. "Gary was between a rock and a hard place," Aleshire said. He argued to the court that the county had long planned to take over mental-health response, and, therefore, Griffin created no grave emergency justifying the budget cut, which has been the county's official position. The key legal issue – one with statewide constitutional implications – is whether a commissioners court can cut a budget after adoption. "If the county prevails, a radical change will give county commissioners unprecedented power," Aleshire said. "Elected officials will have lost their independence."

The potentially landmark case had disconcertingly humble beginnings on Friday. The first words out of Clawson's mouth were that this was a temporary injunction hearing - not a request for summary judgment. "My heart sank," Aleshire said, at Clawson's mistake. If Clawson was absentminded, County Attorney Jana Duty appeared virtually indifferent; throughout the proceedings she was mute, often staring at the ceiling, and leaving the county's defense to its hired guns. Clawson sided with the county down the line, essentially ruling that commissioners courts are due greater legal deference than district courts, though Aleshire had argued adamantly to the contrary. When Aleshire asked why Clawson refused to grant a single objection listed in Griffin's response to the county's motion, the judge responded, "I don't want to do the 3rd Court's work for them," adding cryptically, "I've lost all sympathy for those guys." Aleshire said that deference is normally owed the plaintiff's case in a summary judgment hearing, with the presumption that in most instances the complaint at least deserves a hearing. Clawson ruled otherwise.

The county's attorney, Steve Mierl, argued that motives shouldn't matter to the court, despite the media's "spin" that the case is in essence an intracounty "grudge match." ("That's exactly what it is," Griffin said.) Indeed, the short, sterile proceedings masked an apparently vengeful case history. For example, the 70% cut to Griffin's budget seemed intended to incapacitate his office, said another of Griffin's attorneys, former Texas Attorney General Jim Mattox. Griffin's defenders argued that the conflict is in part the aftermath of the downfall of former Sheriff John Maspero, investigated by Griffin's office before Maspero's resignation; followed by Griffin's subsequent support of sheriff candidate Jim Wilson against the eventual winner, current Sheriff James Wilson (no relation). Factions on and off the Commissioners Court dais have chosen sides – with the result that county mental-health response has been compromised.

As a result, the county has lost "the best mental-health detail in the state," as Jim Wilson put it. In eight years, no one sued Griffin nor died in his office's custody – a claim that can no longer be made for the county's subsequent record. In court, even Mierl backhandedly dubbed Griffin's deputies "brain surgeons" compared to the sheriff's "general practitioners" – although in order to make the argument that by redeploying his resources, Griffin had created a mental-health emergency that required the county's budgetary response.

Mierl insisted that Griffin, in suing the county, effectively wants his $400,000 back in a "gunnysack." Aleshire responded that that is only an ancillary aim. Griffin would like one deputy and one clerk in the new budget and would never have sued if the court had granted that one request after the funds-transfer. Aleshire conceded that Griffin will probably never get mental health back. "Gary gave his heart and soul to mental health. The only way he'll get it back is if the people want it," Aleshire said.