GOP Redistricting: Hosing down the ballot

The implications of three Republicans – Henry Bonilla, Lamar Smith, and Michael McCaul – all based somewhere else and representing Travis County, aren't merely about the county's representation in Congress. In a world of old-fashioned partisan politics, changing of guard also has down-ballot implications. 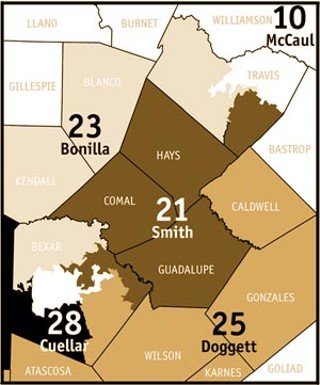 In the old-school bare-knuckle combat of partisan politics, the concept of Travis County without a Democratic congressman would be unthinkable.

As Travis County Democratic Party Chair Chris Elliott pointed out, this is a county where no Republican now claims a countywide office, where two county House districts drawn for Republicans now belong to Democrats Mark Strama and Donna Howard, and where the GOP has failed to field a candidate when a Senate seat opened up for the first time in two decades. Among the state's urban counties, Travis County is the most liberal.

But the political implications that would follow from three Republicans – Henry Bonilla, Lamar Smith, and Michael McCaul – all based elsewhere and all representing Travis County (as the state has proposed in its latest re-redistricting map) aren't simply a question of the county's representation in Congress. In the world of old-fashioned partisan politics, the changing of the guard has down-ballot implications, too.

Nowhere has the "down-ballot" issue been more apparent than in North Texas, where Congressman Martin Frost once served as the godfather of the Texas Democrat Party, before he was paired with and defeated by Congressman Pete Sessions. Frost was the consummate partisan politician. He rallied, bullied, and shored up support for Texas Democrats – and opposition to the new Congressional map – more strongly than any other elected official. He raised the money. He stirred up the troops. He protected state and federal candidates in marginal districts with funding. He made sure the Democratic Congressional Campaign Committee knew the most important races in the state.

One Democratic consultant called him "the Tom DeLay of the Democrats without all the ethical baggage." And while no one has compared Lloyd Doggett to Martin Frost, the concept of a congressional protector is one that has strong appeal for most local and state candidates. Voters turn out at the polls when a strong, recognizable candidate they support is at the top of the ballot and when the money is flowing in the races, say observers.

Not only is it bad that the districts in Travis County would be all Republican, said Frost's former chief of staff Matt Angle. It's a greater disadvantage because they would be safe Republican districts. "When you start drawing districts that are safe Republican or safe Democrat, there's no incentive to raise and spend money in the fall," Angle said. "So in the absence of strong congressional races, you have to fall back on state, county, and local candidates to raise all of their own money. That's why safe districts hurt as much as they help."

Local Democratic consultant Peck Young said a Republican Congressman at the top of the ticket could be a hassle for Strama and Howard, especially when those who vote GOP here are likely to be hardcore, straight-ticket voters. On the other hand, Young also noted that Travis County voters of whatever party are generally more sophisticated and informed than voters elsewhere and more likely to be outraged by the way congressional districts have been redrawn.

"This is not a city where you have Democratic voting for some of the traditional reasons, like a big labor community," Young said. "This is a city where a lot of our Democrats are highly educated, liberal, if not radical, voters. They're active voters. Republicans may end up regretting that they turned the Democrats in the county mad and mean."

One Democratic consultant predicts the opposite effect on down-ballot races in Republican districts, especially if the Republicans are highly partisan. Kelly Fero, who has had huge success in placing moderate Democrats like Strama and Howard into districts equally split between Democrats and Republicans, said that voters are now fleeing the partisan extremes. The day of reckoning for the ultrapartisans is coming, Fero said.

"I don't see Republicans at the top of the ticket helping or hurting. In fact, if they're ultrapartisan in nature, it might help push some independents into the Democratic column," Fero said. "The fact is, most voters fall into the missing middle. They're looking for someone pragmatic, not political."

FairVote, a nonpartisan think tank out of Washington, called for redistricting to be done at the federal, not state, level in a news conference on Capitol Hill on Tuesday. Executive Director Rob Richie said the overarching partisan goals of political parties – to create safe districts for incumbents – often leads to voters (especially voters of color) who have no hope of ever impacting an election.

"The fact is that most races aren't competitive. Most people realize that their vote matters in very few races, and I think that leads to people who don't participate at all," Richie said. "The point is that we need to be creating elections where all the players are trying to help you participate in the process, so that you have elections that matter, and that's what we haven't done. We haven't had a conversation about that part of elections."