As the governor's race begins, is there a winning hand for Texas? 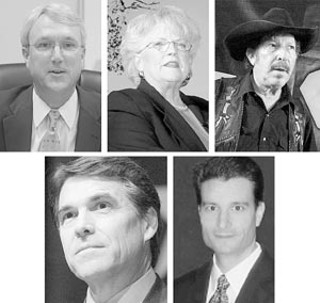 It's still very early – the dust of the World Cup and the All-Star Game has barely settled – but it's probably not a good sign that the burning July political issue is whether Comptroller and "independent" gubernatorial candidate Carole Keeton Strayhorn is entitled to have the nickname "Grandma" embossed on the November ballot in addition to all her other names. Secretary of State Roger Williams (whose qualifications for the office are confined to large Republican campaign contributions and even larger used-car sales) ruled this week that "Grandma" – as in "One Tough ..." – is instead a political slogan, to which Strayhorn responded she will sue. (Her actual grandchildren, reportedly not yet entirely on message, were not consulted.) The Rick Perry campaign chimed in to denounce Strayhorn's "childish temper tantrum."

Can anybody here say "Kinky"?

The Texas Name Game has gone national – not surprising for a media much more devoted to bug-swallowing contests than public discourse. But it is helpful for the rest of us to recall that there are still a few state policy issues requiring earnest attention. Chief among those remains public education, although the illusion produced by the Supreme Court decision and the recent special Lege session (not to mention the summer doldrums) may have left the impression that the state has "solved" the education crisis once again. For those suspecting otherwise, I recommend Paul Burka's piece on the governor's race in the July Texas Monthly. The school-finance summary is somewhat buried within, but lays out nicely in a few paragraphs how the current $8.2 billion budget "surplus" (a Capitol term of art meaning, "income we refuse to spend on real needs") allowed a cynical Lege sleight-of-hand with property taxes for a whopping bill that will come due in future years.

"In its determination to reduce property taxes by one third and increase spending on education," writes Burka, "the leadership promoted a plan that did not balance. The new taxes do not cover the cost of the tax cuts and the new spending on education ... So the tax cuts not only have first claim on all the revenue from the new taxes but will almost surely require dipping into future surpluses, leaving less money for education, health care, and other state responsibilities. What happens when the economy suffers an inevitable downturn and there's a shortfall instead of a surplus? One of two things: a tax increase or budget cuts – and you know which one the Republican leaders will choose. One crisis is solved; another is born."

Although it's hard to tell if anybody's listening, education indeed comes up now and again on the stump. A couple of weeks ago, the candidates wooed the Texas Classroom Teachers Association, meeting in Austin. Perry understandably proclaimed the school-finance plan a bipartisan boon for property owners, teachers, and students (very much in that order). Strayhorn mocked Perry's pretensions to massive property-tax cuts, having previously described the plan (aptly enough) as a "hot check." Friedman, who elsewhere bragged that he hadn't paid any attention to the Legislature, proposed legalizing casino gambling for school funding – although doing the same with lottery money certainly hasn't paid the note. He added that we should privatize school sports, to get that corporate money flowing as well – maybe that would help pay the steroid bill for the big suburban football conferences. (Libertarian James Werner, who didn't address the school group, promises school vouchers for everybody.)

Democrat Chris Bell has focused recently more on ending high-stakes testing than financing per se. (Teachers are painfully and personally aware that the TAKS test has always been more about beating up schools and teachers than about educating students.) Bell did say that the overdue $2,000 raise for teachers needs an additional $4,000 to approach the national average, and he actually and publicly declares that if Texas wants good schools, it has to pay for them.

That played well to the TCTA. But as with other such groups (most notably the Texas State Teachers Association), teachers are so tired of being shortchanged and pounded by the Lege, and so doubtful that Bell can win in deep red Texas, that many are embracing Strayhorn as their only hope.

Last week, Democratic deep pocket Ben Barnes, now supporting Strayhorn, told my colleague Amy Smith much the same thing, although financial defections from BB and his fellows tend to be self-fulfilling prophecies. It's certainly true that only Perry and Strayhorn, at the moment, have sufficient funds to run statewide media, and Bell's Mr. Rogers persona has failed to light a fire under an electorate (or funders) now accustomed to looking for film stars or bomb-throwers – or even machine-tongued grandmas – for political entertainment. All Friedman has to do is drop a few one-liners and he's assured of a sound bite or two, but whether that comedy routine and free media can carry him beyond the summer doldrums into actual policy discussions, which he abhors, remains an open question.

Burka suggests that Perry's golden political fortune (less glossy but akin to that of his predecessor) will bless him once again. "A crowded field benefits him," Burka argues; "the more people in the race, the more the anti-Perry vote is divided and the less likely it is that any single opponent can get enough votes to defeat him." Maybe so. But it also means that with both Strayhorn and Werner draining votes from his right, Bell and Friedman from his left, Perry will inevitably be a minority governor. He probably won't notice, having long since accustomed himself (again like his predecessor) to governing by, from, and for the lobby.

But maybe the opposition will. Faced with an exploding minority, working-class population, and a state budget foundering in 19th-century notions of laissez-faire economics, perhaps progressive Dems and a handful of their GOP colleagues can begin to form a governing coalition that can actually respond to 21st-century political and social conditions. Despite Tom DeLay, there's only so many ways you can re-draw an electoral map. The voters will be there, if the politicians can only find them, and assume a leadership worthy of their attention and engagement.