Second of two House Subcommittee on International Terrorism and Nonproliferation hearings held in South Texas; and Department of Homeland Security progresses with plans to militarize – and privatize – border 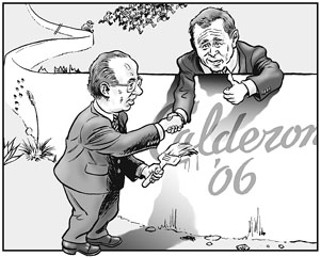 KINDRED SPIRITS
Although Mexican election officials have dubbed conservative National Action Party, or PAN, candidate Felipe Calderon winner (by a mere half a percentage point) of the country's July 2 presidential election, populist Democratic Revolution Party, or RRD, candidate Andres Manuel Lopez Obrador, Mexico City's former mayor, has charged election fraud and is demanding a recount of the 41 million-plus votes cast throughout the country. (Florida 2000, Anyone? ) Thousands of Lopez Obrador supporters were marching Wednesday from various parts of the country to Mexico City, the nation's capital, to protest the election's outcome. More than 100,000 Lopez Obrador backers turned out in downtown Mexico City last weekend to show their support, according to the Reuters news agency. (Illustration By Doug Potter)

The House of Representatives brought the second of two field hearings led by the House Subcommittee on International Terrorism and Nonproliferation to Laredo last Friday. House Republicans called for the hearings after the passage of both the Senate and House immigration bills, which are directly at odds with one another. While the Senate's bipartisan bill (S 2611) attempts to deal with the US's undocumented population while tightening border security, the House's (HR 4437) puts border enforcement before any kind of real immigration policy and is backed by 236 Republicans and a lone Democrat.

"The purpose of [these hearings], titled Border Vulnerabilities and International Terrorism, is to assess the threat of international terrorism and scrutinize our nation's response," said House Subcommittee on International Terrorism and Nonproliferation Chairman Ed Royce, R-Calif., at the July 5 hearing in San Diego. The timing of the hearings, however – before the congressional compromise of the two very different bills – has caused many to call them nothing more than an attempt to whip up public support for HR 4437 by linking terror attacks with immigration policy. The hearings in Laredo, led by Royce, drew Texas Democratic Reps. Rubén Hinojosa, Silvestre Reyes, Sheila Jackson Lee, and Charlie Gonzalez, all of whom were agreed that the hearings were nothing but an example of, as Gonzalez stated, "politics trumping policy."

Meanwhile, the Department of Homeland Security seems to be rendering the House's hullabaloo moot by progressing full-steam ahead with plans to militarize – and privatize – the border. According to CorpWatch, DHS is courting defense contractors for help with border security. The corporate watchdog group quoted Deputy Director Michael Jackson as saying, in a speech to more than 400 defense contractors and homeland-security industrialists, "We're asking you to come back and tell us how to do our business. We're asking you. We're inviting you to tell us how to run our organization." A slew of private companies, including Lockheed Martin, Boeing, and, Ericsson, are vying for a $2.5 billion contract for the Secure Border Initiative Network, which will be awarded in September. 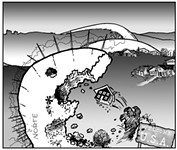