Austin students get a summer immersion in activist history 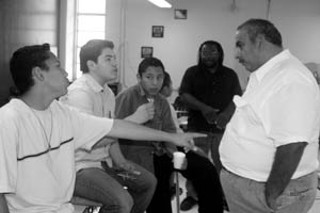 Eduardo Sifuentes, Luis Miguel Orozco, and German Sifuentes discuss politics with Alfredo Santos. Tim Eubanks of Austin Voices for Education and Youth stands in the background. (Photo By Michael May)

Down a silent and dusty hallway on the second floor of Lanier High School, a group of students are spending their summer learning how to build a social movement. These aren't button-wearing, slogan-chanting activists poring over The Anarchist Cookbook. Most of the dozen or so here are ordinary immigrant students who protested for the first time this spring, after the U.S. Congress proposed an immigration bill that would have criminalized members of their families. Now they're taking part in the Social Justice Summer School – sacrificing their sunny afternoons to sit under fluorescent lights and figure out how they can distill that flash of youthful energy and emotion into something that lasts.

Alfredo Santos, 54, is their professor of protest. As a young man in the Seventies, Santos organized in California, alongside César Chávez and the United Farm Workers, and he clearly identifies with his students' budding political awareness. "I never thought I'd see walkouts like that again in my lifetime," says Santos. "It's like us back then. They're not afraid."

Santos is an organizer with Austin Voices for Education and Youth, the main sponsor of the summer school. The group aims to get students involved in their education, and last year it arranged several communitywide meetings to discuss AISD's effort to redesign its high schools. After the student protests this spring, the organization saw an opportunity. The students involved were clearly passionate, but the effort lacked organization and a well-defined message. Santos suggested creating a summer program similar to the Highlander Folk School, which trained Rosa Parks in the Fifties. The principal at Lanier offered them space to hold the five-week Social Justice Summer School, and they recruited students who had participated in the marches at Lanier, Johnston, and Akins high schools. The hope is that these students will evolve into leaders who can help improve their schools and communities.

One day last week, Santos led the group of high school and college students through a discussion of culture and identity. "Identity is something fluid that can change in different situations," he said. "For instance, when I was growing up in the 1960s in a small town, I felt ashamed of my dark skin. I never danced salsa or anything like that. But after I got to college and was exposed to the Chicano movement, I really reinvented myself. I was all over the dance floor." For emphasis, he snapped his fingers and shook his belly with a grin.

The soul-searching conversation that followed vividly illustrated just how hard it might be to organize Texas Hispanics around a common cause. There's Luis Miguel Orozco, who came from Mexico five years ago and felt very alienated from many Mexican-Americans at his middle school, most of whom, he says, dropped out before high school. "It seemed like they didn't know where they were from, Mexico or America," he said. "And so they had no respect for anything. It made me ashamed, and I wanted to be different." There's Julian Padilla, who identifies most strongly as an intellectual and a gay man. "I went to school at McCallum High," he said. "So most of my friends were white, and I didn't really act that different than them. Still, the world sees me as a Latino." And there's Yvette Garza, who grew up in a small town on the border. "I don't consider myself American," she says. "What's the point? Americans just see me as a Mexican, and I'm proud to be Mexican! But, at the same time, I feel excluded from the foreign-born students. We need a new Chicano movement, but it's hard when there are those divisions."

The students crowded around a laptop to watch part of the documentary film The Times of Harvey Milk, about the groundbreaking gay San Francisco city board member assassinated in 1978. They watched the final scene of the film, when thousands of people holding candles turn the San Francisco streets into a constellation of grief. For several students, it was their first exposure to the gay rights movement. Santos believes it's important to teach them the history of social movements, from Gandhi to the Zapatistas. "These are important lessons they don't get in school," he said. "You see how other movements succeeded and failed. You understand that it sometimes takes decades to win a battle, and it takes perseverance and tenacity."

The Santos method seems to be working. The students are beginning to realize that they are living through one of those historical moments when it pays to fight back. Hispanics may be divided along cultural and political lines, but most have friends or relatives who are undocumented immigrants. Lanier junior Orozco, for example, fled his abusive father in Mexico to join his mother's family here in Austin. He and his mother are here legally, but his aunts, uncles, and grandparents are undocumented. "Any laws that affect undocumented immigrants are going to affect me and my family," he says. "Americans need to understand that people come here out of necessity. They are fleeing desperate conditions in Mexico. I understand that because that's what my mother and I did."

If the Social Justice Summer School is going to produce a teenage, Hispanic Rosa Parks, Orozco's a likely candidate. When he heard last spring that the U.S. Congress was considering anti-immigrant laws, he knew he had to do something. Some other students were talking about the national protest planned for March 30, but no one was organizing the effort. Orozco naturally took charge. He arranged a meeting place and led hundreds of students on the eight-mile walk to the Capitol. Along the way, he kept the march peaceful and on track. "I felt very proud," he says. "It really proved what we can do if we raise our voices together. And we got some good things out of it. The school created a program after the walkout where students discussed immigration issues. It made more people aware of what's going on."

The experience profoundly changed Orozco. He feels a sense of responsibility to maintain momentum, and students check in with him to get the latest on the immigration debate, as if he were a one-man CNN. And on the last day of class this year, he helped stop a potential race riot. A group of Hispanic students were plotting to fight as many African-American students as they could find because one black student had stomped on a Mexican flag in September. "This happened like eight months earlier," he says, "and now some guys decided they were going to take revenge on every African-American. It was crazy. So a few of us sat down with these guys and told them that there really wasn't a problem, and, if there was, they certainly weren't going to solve anything by beating up random people. Thankfully, they calmed down."

Orozco says he knew very little about other social-justice movements until this summer. The story of Mahatma Gandhi has particularly impressed him. "He shows what you can do by fighting and not fighting at the same time. He defeated the great British Empire, but he did it peacefully." Orozco can relate because he finds it a struggle to convince his fellow students that violence is not the answer. "It's hard to work with teenagers," he says, laughing. "I mean, I'm a teenager myself, but sometimes I feel like I'm not. They're very hyper and passionate. During the march, some started shouting at me, 'Why should we listen to you?' Eventually they realized we were all fighting for the same thing."

Several other Lanier students are also taking part in the Social Justice Summer School, and they all say they'll march again, and this time they'll be better prepared. "If a reporter asked me why I was angry before," says German Sifuentes, a recent immigrant, "I didn't know how to answer. But now I know about the economics of immigration. If people accuse us of stealing from the U.S., I can talk about the taxes we pay and the other ways we contribute to the economy. I can now truly represent my people."

Santos plans to continue guiding these young activists throughout the next school year. He and the other leaders at Austin Voices for Education and Youth plan to start "Stand Up" clubs in the high schools, providing students with a specific time and place to organize. He hopes to encourage a student movement that's more proactive, one that will take aim at injustices happening right at school, like the large number of Hispanic dropouts. "It's not enough to feel that there's an injustice," he says. "You have to show your face to make a difference. The students who participated in the walkouts have taken a public position and are changed from within. And you're going to see millions more following in their footsteps."