The original Town Lake Park Master Plan put forth in 1998 (above) was to be an opulent collection of sights, sounds, and the arts. One of the contributors to that plan calls the revised version of Town Lake Park no more than "8,000 square feet of hardscape and concrete."
View a larger map

Town Lake Park may be the jewel of the city, but artist Beverly Penn fears that, in the city's current construction plans, it's no more than another Intel building. That's how Penn views the city's revised plans on the city's well-beloved park, Lady Bird Johnson's own personal valentine to the city of Austin. A master plan of Town Lake Park seven years ago envisioned it as an opulent collection of sights, sounds, and the arts. That's not what the city is putting on the ground right now, though, Penn says. Penn should know. She and an artist team created the children's garden, part of a master plan that was touted at conferences around the country. Tough economic times put those plans on hold, and now that the Parks Department is back, Penn calls the scaled-back version of Town Lake Park no more than "8,000 square feet of hardscape and concrete" that will eventually face a jackhammer if the city intends to add art pieces to the park. "We're not talking about a redesign. It's too late for that. But we are looking for some sort of compromise on the design so that we can eliminate or add artistic elements," said Penn, quickly adding, "We know we have to work within the budget. The artists have always been able to do that. What we want to make sure, though, is that what we put on the ground has integrity and future potential for art that could be underwritten by a donor. We don't want something that has wasted city dollars." Penn knows the city faces budget limitations. She understands it will not be the park she envisioned. At the same time, Penn wants it to be a space that might eventually encourage the original vision. It wasn't until last week – well into the pouring of the concrete on the Town Lake Park site – that Parks Department officials met with Penn, her colleagues, and stakeholders in the process, including Friends of the Park. They meet again next week to talk about alternatives, leaving Penn "cautiously optimistic." The city's initial plan for the 54-acre Town Lake Park site, way back in 1998, was a signature urban park with an opulent collection of sights, sounds, and the arts. These were the heady days before the tech bubble burst, so voters agreed to pass two propositions: one that razed the war-era City Coliseum and replaced it with a $48 million events center, and another that leased the site to Palmer Auditorium for the purposes of renovating it as a premier arts venue for the city. The creation of a major urban park, including a $1 million interactive spiral children's garden underwritten by the Junior League, was part of the plan. The master plan showed a series of rooms, or areas, of the park that would be created as funding arrived: the children's garden, a lagoon, an interactive fountain, and space for community events. If the children's garden had been built as planned, it would have been the largest and most ambitious project ever undertaken by the city's Art in Public Places program. However, when the city's economy took a tumble – and the park was delayed – the Junior League pulled its funding for the project, forcing the city to revamp its actual park plans. Now, credit for the park – which still has a type of concrete spiral garden – is going to TBG Partners, which was instructed by the city to downscale the park plans. (Construction of the spiral park is currently evident from Riverside Drive.) That irks Penn, who still sees elements of her design in the downsized park. She made a plea to the Arts Commission to intervene, a matter that was still a subject of discussion three meetings later. It also irks the Arts Commission, which fears the scaled-back version of the park – with its token arts elements – may be all that people expect for the full-blown park plan. Members of the Arts Commission – who still want to mediate between the artists and the Parks Department – would like to see the city return to a plan that comes closer to the original vision for the park, a space the Arts Commission considers the city's crown jewel. 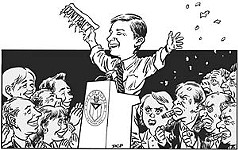 Austin @ Large: Austin at Large
A deal's a deal! Austin is a hard place to do what people don't want done. Is that so bad?