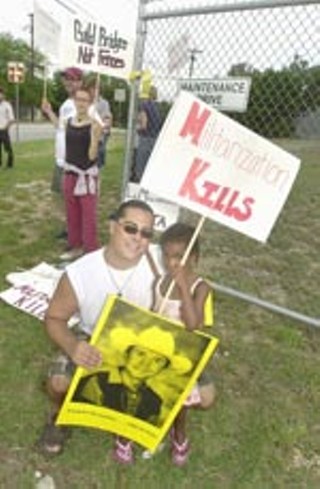 ACLU director Will Harrell and friend at Camp Mabry hold a photo of Esequiel Hernandez, an American teenager gunned down by a Marine patrolling the Texas-Mexico border in 1997. The protesters say similar tragedies will occur under President Bush's plan to militarize the border. (Photo By John Anderson)

After President Bush's call for deploying 6,000 National Guard troops to the Mexico border, Gov. Rick Perry authorized the use of 2,300 members of the Texas Nation-al Guard, who are trained locally at Camp Mabry. "We have trained and deployed more than 300 people so far," said Camp Mabry's Col. William Meehan "and expect to have trained 500 by the end of this week."

Though Meehan said that whether the governor's quota will be met is up to the Border Patrol, the plan is to train and send 1,000 troops by July, and 1,500 by the end of August. It was this news that brought 30 or so people to the gates of Camp Mabry this past weekend, wielding signs that bore the image of a young man in a cowboy hat named Esequiel Hernandez Jr. "We're just here to let these folks know what has happened before," said ACLU Executive Director Will Harrell, as cars rolled slowly past the demonstrators.

In 1997, the 18-year-old was fatally shot 100 yards from his home by a 22-year-old Marine who was deployed to the border as part of a Joint Task Force mission in support of the Border Patrol. "Sending the National Guard to the border is just repeating the same pattern that killed Esequiel," said the ACLU's Ray Ybarra, who has worked extensively on border issues. In addition to creating the ACLU Legal Observers program, whose members monitor the activities of the Minutemen, Ybarra organizes against border militarization such as the recent Operation Linebacker, an immigration control tactic conceived by the Texas Border Sheriff's Coalition. According to the governor's office, which has pledged $3 million in criminal-justice grant funds to support the project, Linebacker's purpose is to "integrate law enforcement resources along the border to increase both public safety and national security between points of entry."

Meanwhile, the Border Network for Hu-man Rights and the ACLU report that folks living in the East El Paso neighborhoods of San Elizario, Agua Dulce, Sparks, and Montana Vista have been experiencing an "increase in public safety" that consists of the El Paso County Sheriff's Office erecting road blocks and holding immigration raids in their neighborhoods, resulting in a general fear prohibiting members of the community from calling on their local law enforcement "in the event of crime, emergency, or even domestic violence." After receiving a petition signed by 3,000 community members, the sheriff's office released a statement Friday stating it would temporarily cease holding immigration stops and raids in El Paso; the BNHR and ACLU commend the action as a positive step that needs to be permanent. Sen. Eliot Shapleigh of El Paso also commended the sheriff's decision, saying "In America, the Constitution guarantees that all citizens are free from unreasonable search. To stop, frisk, interrogate, or detain based solely on the color of one's skin is against our laws and traditions."