Will the Nuke Mushroom? 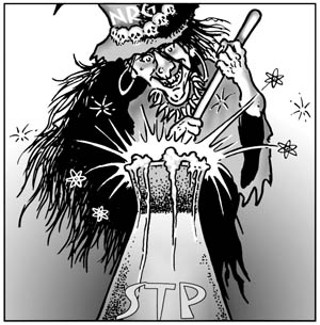 Plans to expand the South Texas (Nuclear) Project, located in Bay City, were announced last Wednesday, amid a national renewal of interest in nuclear power generation, following nearly a quarter century of hostility toward it in America. New Jersey-based NRG Energy Inc., which last year bought a 44% interest in the STP (formerly known as STNP, until the word "nuclear" was dropped from the name), made public its nuclear ambitions, along with plans to develop more coal energy production and wind projects in Texas. Austin Energy owns 16% of the STP but declined to comment on whether it would buy into an expansion.

NRG's statement of intent is a precursor to its actual permit application, one of at least 25 expected by the end of next year, according to the U.S. Nuclear Regulatory Commission, though none have been filed so far. Critics believe generous federal incentives offered in the 2005 Energy Policy Act are the only thing fueling renewed interest in nukes, which they say are just as unstable financially and environmentally as they ever were – exacerbating post-9/11 safety concerns and adding to existing piles of toxic waste, currently held on plant sites, with no approved disposal destination on the horizon.

NRG intends to add two new reactors to the STP's existing two, at a cost of $5.2 billion, according to a statement. The company estimates work being completed by 2014. "Texas's demand growth is among the strongest in the nation, and in order to ensure the reliability of electrical service in the region, new plant construction is essential," read NRG's press statement. To build the new reactors, NRG plans to partner with General Electric and Hitachi, whose Advanced Boiling Water Reactors, NRG says, have been proven in design and construction and have a track record of reliable and safe operation in Japan. NRG intends to fund the project's up-front costs largely through power-purchase agreements, bilateral contracts, and other deals with both investor-owned and municipally owned utilities – which, according to NRG's statement, will support the company's existing cash flows and what's known as nonrecourse project financing, or arrangements in which a lender is only entitled to repayment from a project's profits, not from other assets of the borrower. It is believed that NRG filed its letter of intent last week in order to be eligible for tax credits and incentives associated with the Energy Policy Act. NRG didn't return calls requesting an interview.

"If operators had to assume the financial risks for the new plants, there's no way they'd be built," said Luke Metzger of activist group Environment Texas. A press release jointly issued by ET, Public Citizen's Texas State Office, the Sierra Club's Lone Star Chapter, and the Sustainable Energy and Economic Development Coalition read, "Nuclear power continues to be dependent on taxpayer handouts for survival," and "the risks from radioactive exposure and accidents are enormous and always have been." Paul Gunter of the Nuclear Information and Resource Service, a longtime opponent of new nukes, said the new plans, including NRG's, "put the taxpayer out in front to absorb the full cost of the project risk," referring to the recently renewed Price-Anderson Act of 1957 (which pools money from utilities and federal funds as a kind of supplemental insurance policy in the event of a major plant accident, and, according to critics, makes taxpayers liable), not to mention government-subsidized construction risk insurance (indemnifying over-budget and past-schedule projects). "If Price-Anderson hadn't been renewed, utilities would've been more reluctant to move forward," said David McIntyre, an NRC spokesman. The STP's 1981 construction was delayed nearly a decade and cost six times more than the projected estimates. Gunter says out-of-control budgets and schedules aren't out of the ordinary for today's nuke projects.

Aside from financial risk, unresolved issues of radioactive waste disposal and site security loom large in the minds of watchdogs. Metzger noted the almost 10 years of delays at the proposed Yucca Mountain nuclear waste repository and the more than 54,000 metric tons of discarded irradiated fuel sitting at plants nationwide. McIntyre said the storage issue is a "matter of national policy" and that the commission is awaiting an application from the Department of Energy for Yucca Mountain. Even if it arrived today, McIntyre said, it would be several years before Yucca Mountain would start accepting waste – something it was originally supposed to begin doing by 1998. Casting doubt on the industry's safety prognosis, a Government Accountability Office review of existing reactors released last week found "significant shortcomings" in NRC efforts to "ensure that issues affecting nuclear plant safety receive the attention their significance warrants." A 2003 Houston Chronicle visit found security at the STP to be lax. A security industry expert who accompanied reporters called it "appalling." And a 2002 internal NRC survey showed that almost half of all employees thought their careers would suffer if they raised safety concerns, and nearly one-third of those who had raised safety concerns felt they had suffered harassment and/or intimidation as a result.

The Energy Policy Act contained $13 billion in new subsidies, tax breaks, and incentives to build new nukes; and from 1947 to 1999, the nuclear industry was given more than $115 billion in subsidies, 25 times more than subsidies for renewable energy, according to an April Public Citizen report. Metzger and his cohorts contend that the need for new power plants can be offset by developing Texas' vast renewable energy potential and instituting better efficiency measures in buildings. Whether renewables will receive a fair portion of government pork ought to be a question asked of campaigning politicians. With Texas' population slated to double in the coming years, we will clearly need more energy. "Do we really want to rely on Homer Simpson technology in making our choices about energy production?" Sierra Club's Donna Hoffman asked.