Hoover: Caught in the Flash 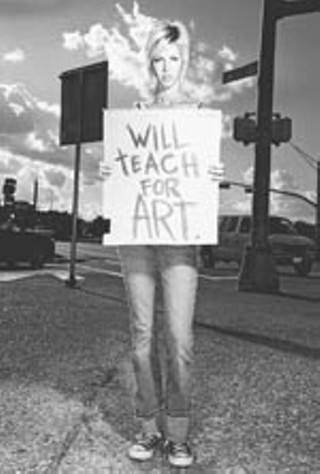 Austin High art teacher Tamara Hoover can explain, without a hint of shame, how she went from award-winning teacher to scandal of the week in the click of a shutter. The story begins with a heartfelt declaration. "I'm an artist, and I collaborate with other artists," she says. "That's how I want to live my life."

That's why it was business as usual when photographer Celesta Danger, her girlfriend, pulled her out of the bedroom with nothing on but knee-high striped socks, and thrust her into a brightly-lit studio with several partially dressed and nude models. "I like to capture life as its happening," says Danger. "She had just gotten out of the shower, and had put on her socks before the rest of her clothes. It was not premeditated at all."

Click. Hoover and friends are captured dancing chorus line-style. Her striped socks fly high, and a quartet of pink shadows skip across the wall. Click. Hoover laughs and jostles with a nude male model, her butt pressed against him in a flirty jest. Click. Candlelight paints the room red. Danger kisses Hoover as she leans back onto a bed. She's now wearing a spiked dog collar and no socks at all.

Danger posted a dozen or so nude photos of Hoover on her photography Web site, where they sat among thousands of portraits of friends and fellow hipsters (Danger is a photographer for the Texas Rollergirls). Hoover and Danger's relationship is chronicled in loving detail; browsers can view the couple leaping from bed to bed in a mattress store, hanging out at a Chinese restaurant and, apparently, playing street hockey with sponge mops. In context, the nude photos are but a brief hint of carnal moments in a life lived goofy and sweet.

The photos, however, took on a very different context when they were viewed in a high school classroom. That happened in mid-May, after Hoover and fellow Austin High art teacher Gayle Andrews got into a spat over a shared kiln. Shortly afterward, a student told Andrews about a way to get Hoover in trouble and brought up the Web site. The news reached the administration and Hoover was escorted off campus. The district soon began the process of firing her.

The controversy takes place among a growing worry that tech-savvy minors are being corrupted by online solicitations and pornography. There are strict laws, both federal and state, that prohibit exposing students to any Web site deemed "harmful to minors." Hoover could even have been charged with a crime if it turned out she sent students to the site. Within that context, it's not surprising that even vaguely erotic photos of a teacher and her lesbian lover on a public Web site would bring condemnation. Still, Hoover maintains the photos are not "sexual," and remains mystified by the reaction. "I don't consider these photos inappropriate," she says. "I was never concerned about students coming across them. My students are beginning artists, and they see nudes all the time. There are nudes in the Sistine Chapel. The human form has always been a part of art study."

The controversy has had the inevitable result of corrupting the intimate nature of Danger's work, a fact that she takes personally. "It disturbs me that people now see me as a pornographer," Danger says, adding that people have been surfing her site searching for nudes. "These photos have been taken out of context. I realize I can't change other people's perspective of my work, but I really don't like people visiting my Web site with lascivious intentions." Danger has since taken the nude photos of Hoover off her site.

It doesn't take a museum curator to tell the difference between artistic nude photography and smut, and the district is not trying to claim the photos are pornography. Instead, the district is accusing Hoover of a "failure to meet the District's standards of professional conduct," and engaging in an activity that "because of the publicity given it, or knowledge of it among students, faculty and community, impairs or diminishes the employee's effectiveness in the district." The district declined to comment further about the case.

Hoover is requesting a hearing, which will give her the chance to argue her case in front of an independent hearing examiner. Her lawyer, Jay Brim, says the district's vague justifications about "standards of professional conduct" give it some wiggle room. "It's an easy platitude to say that teachers should be held to a higher standard," says Brim. "But how do you apply that? How are these photos outside the realm of what she teaches? I want the district to prove that teachers have been told this kind of activity is wrong."

Hoover blames the district for any publicity brought on by the photos. She wrote a letter to administrators asking that they not inform students and parents about her case. Instead, they sent a letter home that implied she had posted photos on a pornographic site. She says ensuing media attention has had the effect of distorting something beautiful into something nasty. "I do worry about how all the media attention is affecting my kiddos," she says. "They are impressionable, and I wouldn't want their ideals to be crushed by what's happening to me."

In a signed affidavit presented to the AISD board, Andrews claims a 15-year-old boy told her that "hundreds" of Austin High students knew about the Web site. Brim intends to challenge that claim. "One student certainly knew about site," he says. "But we have no reason to believe it was common knowledge until AISD sent out that letter and exposed the issue to the community."

As it stands, AISD's broad justifications leave little room for Brim to argue what he believes the case is really about: Hoover's First Amendment right to free expression. "I'm asking for more specific allegations," he says. "I hope to get it tied down to that."

Hoover remains hopeful that she can return to Austin High in the fall and turn the whole mess into a valuable lesson. "It could really spark a great dialogue," she says. "What are the boundaries around art? How is art perceived? How can art affect the artist? What does it mean to stand your ground as an artist?" Unfortunately, Hoover knows the answers to these questions aren't always pretty.