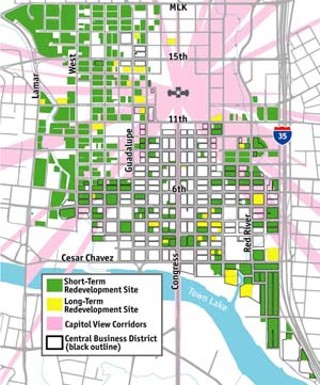 Green Means Go
These maps, based on the Downtown Sites & Development Potential map released by the city's Downtown Commission this week, show all the potentially available development sites in Downtown and in the Central Business District. The sites indicated on the maps are what's left after eliminating 1) properties already under development or with existing structures too valuable to replace, 2) historic buildings, and 3) government buildings and parks. The sites remaining are therefore available, in the commission's judgment, for redevelopment as housing or other uses – either in the next decade (green) or the longer term (yellow). The pink rays emanating from the Capitol at 12th and Congress show the currently protected "Capitol view corridors," where high-rises cannot be built due to special height restrictions. – K.G.

Austinites startled by the height of the latest downtown residential towers – now shooting up with bamboolike propulsion to 36 and 44 stories – can get a bird's-eye view of the forces sending high-rise housing ever skyward from a just-released downtown planning map. Created by downtown development insiders, the color-coded map identifies, by a process of elimination, the relatively few sites available to build downtown housing over the next 10 years.

The Downtown Sites & Development Potential map was created by the Downtown Development Committee of the Austin Downtown Commission in order to demonstrate a city-planning predicament. As the city prepares to hire yet another consultant to create yet another downtown plan, committee members believe it's a perfect time to publicize what developers' proprietary maps have shown for years. "We think the data contained in this map should have some shock value for the council and its [Downtown Plan] consultant," said Committee Chair Robert Knight, who is developing high-rise housing in the Rainey Street area.

"Mayor Wynn has set a goal of having 25,000 downtown residents – that's 20,000 more people – by 2015," explains attorney Chris Riley, who sits on both the city's Planning Commission and the Downtown Commission. "Everyone's throwing out this 20,000 number – but how do you fit them in, and where are they going to go? It's a lot of people to accommodate on the lots available."

Historic buildings, existing structures, and protected alleyways make it hard to assemble a full block or even half block Downtown for a big project that can house hundreds of people. Of the choice sites remaining, not all will be developed as housing.

Basic three-dimensional geometry dictates that limited sites and small building footprints translate to taller structures, to produce the same volume of living units. Cities worldwide with constrained urban areas reckon with a similar "Tokyo Effect." Yet even if Austin fully embraces high-rise living in the Central Business District, we don't have enough sites suitable for 20-plus story buildings with 100-to-200-plus units, due in part to Capitol view corridor restrictions. Riley believes the map accurately "points up the constraints on development and the need to re-examine premises about how best to achieve density with the few lots that are left."

To create the Downtown Sites & Development Potential map, the Downtown Development Committee members completed a painstaking lot-by-lot analysis of all properties within the official boundaries of downtown – Martin Luther King Boulevard to the north, I-35 to the east, Town Lake to the south, and Lamar to the west. Properties with existing structures deemed too valuable to replace, historic buildings, and government properties were taken out of the game – these appear as white areas in the map reproduced here.

What's left to develop within 10 years (shown in go-for-it green) or beyond (maybe-yes yellow) are sites primarily concentrated on the fringes of downtown. Most lack high-density CBD zoning, and the neighborhood associations just across the downtown boundaries can be relied upon to fight tall buildings that cast shadows in their back yards. On the version of the map showing only tracts zoned CBD, few significant sites glow green – no full blocks and just a handful of half blocks.

It's worth remembering that the committee members' categorizations are somewhat subjective, open to debate, and may reflect to a degree their own specific interests in downtown development. Yet their intimate knowledge of each tract, the property owners, and the existing structures has produced a valuable planning tool for consideration by city planners, the City Council, and Austin citizens. Where Do We Put 20,000 People?
This map shows the developable sites within the Central Business District (roughly south of the Capitol), where CBD zoning allows high-rise residential. The Downtown Commission prepared the map to illustrate the difficulty of achieving the goal declared by Mayor Will Wynn – and widely considered desirable for a vibrant urban scene – of housing an additional 20,000 residents Downtown by 2015.
The point: Not enough suitable sites for high-rise housing appear to be readily available, to hit the “20,000 in 10 years” goal.

It remains to be seen how seriously the City Council will take this data from the Austin Downtown Commission – like most commissions, a volunteer advisory body with no policy-determining power. Knight shrugs, "Traditionally, they have not paid a lot of attention to the Downtown Commission, nor gone out of their way to ask its advice."

But the input is timely, as the city engages new urban planners. The official Request for Qualifications states that this latest-greatest planning team will be tasked with "a vision for the development of downtown Austin for the next 20 years, and to develop an implementable strategy to achieve that vision." The process is expected to begin by October and take about 18 months, according to Michael Knox of the city's

As Mayor Wynn tirelessly reminds the citizenry, a vibrant 24/7 downtown with high density is essential to achieving other Austin goals – a strong tax base, less traffic, and less suburban development in environmentally sensitive areas. With downtown development booming, now is the time to steer a course that produces the balance of office, retail, and housing necessary for a vibrant and walkable city. Yet after decades of lopsided development that shorted the housing component, Austin now must play catch-up on residential.

At his East Austin office, developer and Downtown Commission member Perry Lorenz punches away at his calculator to show why the current downtown housing boom is producing such tall towers – like the 36-story Spring condominiums he is co-developing at Third and Bowie. That project recently won a zoning change allowing an additional 280 feet in height, despite strong opposition from the Old West Austin Neighborhood Association, across Lamar. "It'll take 40 to 50 buildings the size of Spring to achieve 20,000 more people downtown," Lorenz calculates as he runs the numbers. "And what this map shows is that 40 to 50 sites that size in the area zoned CBD probably aren't available."

Currently an 8:1 floor-to-area ratio limits building volume in the Central Business District. Spring's height variance allows for a 12:1 FAR. Lorenz expects that the 700-foot, mixed-use high-rise planned for Fifth and Congress, to be designed by Cesar Pelli's firm, will require a similar FAR – as will the 44-story "360" condo tower planned for Third & Nueces. Both will be taller than the Frost Bank Tower. Another 40-plus story residential tower is in development for the west side of the block at 200 Congress.

Lorenz sees tall residential towers downtown as a civic boon because they provide a greater tax base at minimal cost for city services, compared with suburban growth. Of the Spring site he notes: "The existing property provides approximately $30,000 in property taxes; once Spring is built, adding about 280 households, that site will provide close to $2 million in taxes annually – with negligible costs for increased city services." Spring is being designed by Rafii Architects of Vancouver, where Lorenz says around 100 similar "point towers" have been built in the past dozen years.

Looking at the Redevelopment Potential map, it appears that housing 20,000 more residents downtown does indeed pose a daunting challenge. Knight observes, "It's not unrealistic, not impossible, but achieving that goal is going to involve some very hard choices. Making the tough policy decisions is going to test the mettle of our political leaders. For example, do we as a city care more about a Capitol view from I-35, or getting enough people living downtown? To grow, we can have suburban sprawl, more densely infill existing neighborhoods, or focus on density downtown – take your pick."

Finding more sites for high-rise housing may force unpopular trade-offs. Do we shave away at Capitol view corridors? Change the zoning code to permit taller buildings? Expand the area zoned CBD? If these are the likely choices, who will provide the leadership required to clarify priorities, define a vision, broker compromises, and stay the course?

With bracing honesty, the city's RFQ for an urban planner states: "Plan upon plan and study upon study have been conducted for downtown over the years. Some excellent ideas have been put forth and some change has resulted from these plans. However, no one plan has been prepared that has garnered the support of the community (including our local decision-makers), effectuated change in the areas that are still needed, and created clear policy direction for how downtown should develop in the years to come."

It's a tall challenge. Now Austin must decide whether and how a "Tokyo Effect" proliferation of tall residential towers fits into the solution.

For more info, visit the Downtown link on the City of Austin Web site (www.ci.austin.tx.us/downtown/default.htm).

*On Wednesday, June 21, the Downtown Commission decided to delay the formal release of its draft Development Potential map until later in the summer.