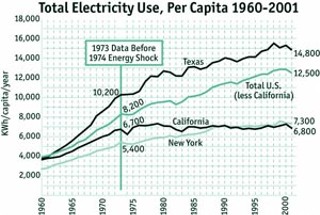 Texas' explosive growth and hot climate, matched with what the Efficiency Texas Coalition calls inadequate spending on efficiency programs, has caused the state's per capita energy use to rise well past the national average. In 2004, 448,020,000 kilowatt hours of electricity demand – enough yearly power for 38,174 homes – was saved through efficiency programs. Since 2002, Texas utilities spent approximately $67 million per year on efficiency programs, which pales in comparison to the average $286 million per year their California counterparts spend during the same period, keeping electricity load growth there relatively flat. According to Efficiency Texas, California utilities will spend $714 million a year on efficiency from 2006-2008.

The Texas Electric Restructuring Act (SB7) of 1999 requires investor-owned electric utilities to offer energy-efficiency programs to meet at least 10% of their annual electric load growth. But ET Director Mark Stover says utilities aren't exceeding that minimum, and their efficiency programs – such as tree-planting programs and subsidies for more efficient air conditioning and lighting – are oversubscribed and underfunded, leaving economic and environmental benefits unrealized. With more efficiency spending, like that of California and New York for example (see chart), electricity use per capita can remain flat as populations swell; efficiency spending, said Stover, can also offset the need for new power plants. Texas is poised to add 15 new coal plants, angering clean-air advocates, who say up to 50% of new energy demand can be met with increased efficiency.

Other energy policy watchdogs aren't as enthused with Efficiency Texas' plans. Carol Biedrzycki of Texas Ratepayers' Organization to Save Energy said, "All energy efficiency doesn't have equivalent benefits. The highest benefits to consumers and the environment is energy efficiency that reduces overall energy use." Biedrzycki has long been an opponent of Good Company Associates' lobbying on behalf of advanced metering technology, which uses price signals to discourage peak-time power usage, something she says merely shifts the times energy is used. Biedrzycki fears that advanced metering – as opposed to energy saving tactics like replacing appliances with high-efficiency models and building weatherization – will have too big a role with the new coalition.

Efficiency Texas has set about its work amid the high-profile Texas Public Utility Commission case against CenterPoint Energy, in which PUC staff members have alleged $105 million in overcharges to Houston-area customers in 2004. If CenterPoint is ordered to return money, ET wants it to be in the form of juiced-up efficiency programs. Stover expects to lobby other major utilities appearing before the PUC this year also. "We want the financial incentives of our regulated utilities like CenterPoint to be aligned with desires of consumers seeking the benefits of efficiency programs," he said, adding that the coalition may approach the PUC or the state Legislature in the future. "Texas leads the nation in energy use," he said. "Isn't it time for Texas to become the leader in energy efficiency?"