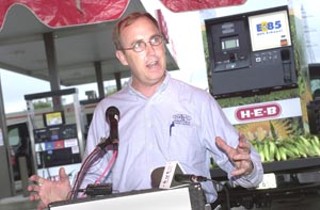 Lately the alternative fuel ethanol has been on fire. The cleaner-burning, domestic, renewable fuel, commonly made from corn, seems be winning political and industry favor. President Bush, who for years couldn't be bothered with alternative fuels, now frequently mentions ethanol; investors are pouring billions into new plants (60 new facilities will join 100 existing sites nationwide this year); and as public pumps become more plentiful nationally, generous tax credits from Washington will keep ethanol's price at or below that of gasoline.

Last week, HEB announced plans to open Austin's first public ethanol pump at one of its gas stations (among five along I-35), and guaranteed it will be 30 cents cheaper than unleaded gas. Add to the buzz the industry's great white hope: cellulosic ethanol technology, currently being developed by a handful of worldwide companies, including one in Texas, expected to ultra-efficiently transform literally any plant matter, from agricultural and yard waste to recyclable paper to cotton clothes, into fuel.

The ethanol craze has its critics. Environmentalists have blasted efforts by federal legislators to relax emissions standards for ethanol plants, especially new facilities powered with heavily polluting coal. And oil industry analysts argue that although federal subsidies do lower prices at the pump, ethanol is in fact less efficient and therefore more expensive than gasoline, and indirectly more polluting because it can't be shipped by pipeline. Despite the criticisms, the industry – boosted by post-9/11 political considerations – is currently in the fast lane.

Under current technology, 85% ethanol is blended with 15% gasoline to create a product known as E85, usable in place of gasoline in over six million Flex-Fuel Vehicles, including common pickups, minivans, SUVs, and sedans – 450,000 in Texas (more than any other state). With five ethanol plants close to construction in the Panhandle area, Texas will have 390 million gallons per year of production capacity by the end of 2007. UT mechanical engineering professor Ron Matthews, head of the GM Foundation Combustion Sciences and Automotive Research Lab, said fuel economy can decrease up to 25% with ethanol but that its chemistry results in better acceleration. Automakers are increasing FFV production, he said. Compared to gasoline, ethanol cuts nearly all regulated vehicle emissions by at least 10%, according to the EPA, and has shown reductions in greenhouse gas emissions of between 30%-40%, compared to gasoline in production and combustion.

The state's first public ethanol pump was opened by the U.S. Department of Energy's Central Texas Clean Cities program, along with alternative fuel supplier and dispenser manufacturer CleanFUEL USA in San Antonio last October. Since then, sales have jumped from 400 gallons to 5,000 gallons per month. Fleet and individual customers have increased from 400 to nearly 700, according to Curtis Donaldson, chairman of the National Ethanol Vehicle Coalition and president of CleanFUEL USA.

Donaldson was on hand Thursday when HEB announced the offering of E85 at its I-35 and Parmer Lane store and gas station, as well as at similar locations in Buda, Killeen, and Schertz (outside San Antonio), as part of a Clean Cities' effort to make E85 available along I-35 from Mexico to Canada. Fellow grocer Kroger made a similar announcement in mid-April, promising to offer E85 at 10 of its stations in Houston and 10 in Dallas. Donaldson said another unnamed retailer will soon follow. Russel Smith of the Texas Renewable Energy Industries Association said hundreds of millions of gallons of ethanol are already flowing into Houston and the Dallas metroplex as a replacement for the air quality-improving gasoline additive MTBE, which has been found to pollute groundwater. He said many fleets have also embraced the fuel statewide.

Critics have long challenged the energy inputs needed to produce ethanol, from the natural gas-based fertilizers used on corn crops to the fuels needed to operate harvesting equipment. But new, cellulosic ethanol technology, not yet perfected, promises to deliver higher energy-yield ratios, while utilizing everything from low-maintenance grasses to organic recyclables. The process also touts greenhouse gas reductions of 90% or more compared to gasoline.

Cellulosic ethanol's proponents are making equally bold statements about its potential. "It is our goal that the U.S. be fuel-independent in five to eight years from our efforts, along with that of others in the field," said George Oerther, president of BioFuels Energy Corporation, located in the Rio Grande Valley town of Raymondville. His company is developing a 12-million-gallon-per-year plant and capabilities to mass-produce smaller cellulosic ethanol distilleries. In Austin, he said "those nasty weeds in Town Lake should make enough ethanol to fuel several of the city's vehicles." Green waste from tree trimming and refuse from produce terminals, both frequently disposed of, are also prime for local cellulosic fuel production, he said.

Seth Snyder, section leader for chemistry and biotechnology at the Argonne National Laboratory said that, although America is becoming increasingly efficient at producing corn, cellulosic ethanol production is far more efficient. He explained that traditional ethanol production borrows liquid sugars from cattle feed-grade corn (still usable afterward) and distills it like whiskey, while the cellulosic method uses chemicals, acid, or steam to break down the tougher biomass (often stalks or chaff) and utilizes more complex enzymes, called cellulase, for distillation. Corn ethanol could supply 10% of America's fuel supply in a decade, he said, but with the help of cellulosic, that number could rise to 30% by 2030. Snyder pointed to another efficiency breakthrough tied to cellulosic ethanol, the possible use of lignin – the polymer that makes plants erect, which becomes a charcoal-like byproduct after production – to power the manufacturing facility itself. Lignin is burned like coal in a steam turbine to make energy.

Oerther says one of his 12-million-gallon facilities would create about 38 jobs plus additional employment in the agricultural sector surrounding it, and that growers would begin profiting almost double per acre compared to typical farming growing new fuel crops. Donaldson said he expects to see cellulosic ethanol in the mainstream by 2010. "For all practical purposes, we do not see a limit in the near future to building more distilleries," said Oerther. "Mankind will not be crucified on a cross of oil."

For more information, see BioFuelsEnergyCorp.com and www.e85fuel.com, where you can also find out whether your car is E85-compatable, or call HEB's bilingual help line at 877/485-8595.

Austin Biofuels, the local distributor that first brought soybean-based biodiesel to Austin in 2002, has announced its intentions to enter the ethanol business. Co-founder and engineer Kurt Lyell described preliminary plans to acquire a new rail spur and three nearby 35,000-gallon storage tanks that ABF would use to bring ethanol into Austin, blend with gasoline, and distribute throughout the area. While most ethanol is currently flowing out of the grain belt, Lyell hopes to tap the hundreds of millions of gallons of ethanol production expected to be online in the Texas panhandle by the end of 2007 and said ABF's goal is to be selling ethanol in Austin by July 2007. Last week ABF also announced the opening of 12 new pumps of B20 (a blend of 20% biodiesel and 80% petroleum diesel) around the Austin area at Signature convenience store gas stations. Biodiesel can be pumped directly into any diesel vehicle without modification, and Lyell says the B20 should be priced comparably to petroleum diesel. ABF also retails B99 (99% biodiesel and 1% petrol) at two central Austin locations. For a full list of sales locations, visit ABF's Web site: www.austinbiofuels.com.