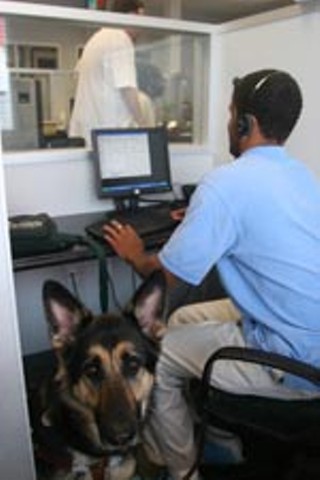 King the dog may be the eyes, but not the ears for his owner, Denime Sadler, a Yellow Cab call center worker who can answer phones and communicate with cabbies as well as any sighted person. (Photo By Jana Birchum)

Ever wonder what it's really like at a taxicab company? If you're old enough to remember the TV series Taxi, you can probably imagine Louie De Palma in his cage, barking out orders to Reiger, Nardo, and the others.

If you never watched Taxi, it's just as well because that kind of cab company is history. Over at Yellow Cab of Austin, they use computers with mapping and geo-positioning software to track customers and drivers. The garage is immaculate, with seven bays, and they have their own body repair shop. The only one barking – well, he barks once in a while – is King, the seeing eye dog. No surprise, since five of the current 25 or so call-center staff members are visually impaired.

Louie would be positively livid. But not Tomas Smith, who, as communications manager at Yellow Cab, manages the call center and computer equipment. "One of our guiding principles is that we be an active participant in the community," says Smith, who has been in the cab business since 1978 (the year Taxi premiered on TV).

A little over a year ago, Smith received an unannounced visit from Denime Sadler, who has been completely blind since age 7. "I had no idea he was coming. I didn't have any want ads in the paper. But he decided that I needed to hire a blind man to answer telephones," Smith said. He convinced me he could get help from the Department of Assistive and Rehabilitative Services. ... My intuition was he could handle the stress and excel. So I hired him."

Sadler, who prefers to say he is a person who doesn't have "physical sight," moved to Austin in 2004 from Mississippi where he had been attending college. "I had a friend here already, but it was a rocky start. My first service animal and I were in an accident with a tow truck. Although we both survived, the dog had to retire. But from tragedy came triumph: I got help from the state and a job here." Sadler says he got the idea for working at the cab company because Capitol Metro contracts with Yellow Cab to provide transportation for people with disabilities. "I kept asking the cab drivers if there were any openings here, and one day they suggested I check it out myself."

Sadler said he recently helped form a coalition to help increase public awareness about issues for people without physical sight. "The blind need to be taught they can be independent and businesses need to be shown we can work just as well – if not better – than 'normal people.' Our unemployment rate is 70 to 80%, which is a disaster."

How hard is it to integrate people with disabilities into the workforce? Employers may complain about all the difficulties associated with the Americans with Disabilities Act, but a recent study by Cornell University says one of the obstacles to hiring people with disabilities is the negative attitude of supervisors and co-workers. Smith says he's spoken with people in state government, as well as with area-employment specialists about what Yellow Cab has done. "The toughest thing is to come to the realization that there really isn't a difference between a sighted and unsighted person. We all have our shortcomings, abilities, and disabilities. Once you can shed the prejudice, you'll find a body of very willing, able, and motivated workers."

Smith said Yellow Cab had to make sure door handles had levers. The company also had to mark the bathroom doors with braille, make sure nothing was protruding into hallways, and install screen-reading software called Job Access With Speech (JAWS) on call-center computers. "Fortunately, we were already moving into a new building that was ADA compliant," Smith said.

Chad Nezat, who has been visually impaired since birth, came to Yellow Cab in July 2005 after being laid off from his previous job. "Computer people at some companies don't like messing with JAWS or claim it has security issues. Then there are times when JAWS doesn't always work – that's been my experience with other customer-service jobs."

Unlike many of his sighted co-workers, Nezat has been touch-typing since the fourth grade and was ready to work with Yellow Cab's computer system. "Most blind people

learn how to type from an early age because we have to communicate in written form," he said. Everyone may not realize it, but all computer keyboards are "braille," Smith added. "If you look at the 'F' and 'J' keys, there are little raised areas – that's basically all they need to get oriented." Hugo Sanchez, who has only worked at Yellow Cab for a short time, also brings a skill some of his sighted co-workers don't have: He is bilingual. "Speaking Spanish is not only a good asset for me, I also think it will help generate revenue for the company, because we can provide something for a segment of the population that might not get served otherwise." Sanchez, who at age 44 is the most senior of the visually-impaired staff members, says there are more opportunities for younger people with visual impairment today than there used to be. When he is not working, he is a proud father of four (his oldest is in the Marines), a ham-radio operator, and plays on the Austin Blackhawks, a world championship-winning baseball team for people with visual impairments. (For more information, visit the National Beep Baseball Association at www.nbba.org.) Although other businesses have been blind to Yellow Cab's success thus far, Smith is happy to report that the Yellow Cab franchises in San Antonio and Houston are also working toward hiring people who are visually impaired. "When we went into this, it was a learning curve. None of us had ever done it, but I got help from Ed Browning at DARS. Our San Antonio branch is currently moving forward with implementing the hiring of blind call-takers, and Houston is not far behind. And there's been an added bonus. We had to make a pretty big technical jump from old, dumb monochrome terminals to modern PCs so we could install the JAWS software. We liked the PCs so much better that we moved all of our software to them. Now, all of our call-takers have access to the new map software. This has helped the entire company."