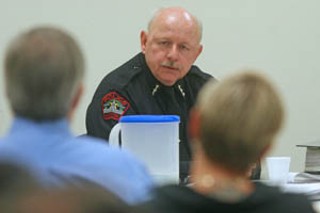 To hear Assistant City Attorney Mike Cronig tell it, the June 2005 shooting death of 18-year-old Daniel Rocha could've been avoided if then-Austin Police Department. Officer Julie Schroeder had just taken a moment during a desperate fight with Rocha to confirm whether Rocha had anything in his hands. If she'd done so, Cronig has suggested – both in his questions at Schroeder's civil service arbitration hearing and through testimony he elicited from various official witnesses – Schroeder would've seen that Rocha had not, in fact, taken her electroshock Taser gun. Thus, she would have realized that Rocha was not about to use the weapon on Schroeder's supervisor, Sgt. Don Doyle, who had been knocked to the ground but was still grappling with Rocha.

But Schroeder didn't check – and that, the city asserts, is a substantial reason to sustain Knee's decision to terminate the six-year APD veteran. "Clearly, I think she was in a position to be able to look at [Rocha's] hands to see if he had her Taser," Knee testified May 25. "I believe, based on the facts in the [Internal Affairs] report, she was not justified [in shooting Rocha]. Even pulling her gun out of the holster might be justified, but still she would have time to give [Rocha some kind of] a warning before firing the shot."

Rocha was killed by a single round from Schroeder's gun, fired at close range into his back shortly after 11pm, during a traffic stop made in connection with an undercover drug operation in Southeast Austin. According to official statements, Rocha, who had a warrant out for his arrest, fought with Schroeder and Doyle in an attempt to flee after the SUV he was riding in was stopped in Southeast Austin. Schroeder said she shot Rocha because she thought he'd grabbed her Taser from a Velcro pocket on her police vest and was preparing to use it on Doyle. As it turned out, Rocha did not have Schroeder's Taser, which was apparently knocked from her vest pocket during the fight.

A Travis Co. grand jury declined to indict Schroeder, and Internal Affairs investigators concluded that the officer's use of force fell within the limits of APD policy. But in late November, Knee handed Schroeder an "indefinite suspension" – the civil service equivalent of a termination – writing in a disciplinary memo that Schroeder had violated several departmental policies, most importantly, that shooting Rocha violated the policy on use of force. "This was a deadly force encounter that, in my opinion, was avoidable," Knee wrote. "Not only ... did Schroeder use deadly force when it was not appropriate to do so, she needlessly jeopardized the life of another officer," that being Sgt. Doyle.

Schroeder is appealing her termination to an independent arbitrator (Norman Bennett), via the hearing which began last week and ended Tuesday at the city's office facility near the airport. Testifying on her own behalf on May 26, Schroeder said that the fight with Rocha was intense, and that, contrary to Knee's conclusions, she was not able to see Rocha's hands before she fired. "He'd been all over my body" during the fight, Schroeder recalled, grasping at her waist, side, and back. Once he broke free, however, instead of trying to run away, Schroeder said, Rocha "lunged at my sergeant" (Doyle). That's when she went for her Taser and discovered it missing. "Why did you reach for your Taser?" Schroeder's attorney Tom Stribling asked.

"Because I planned on Tasing him because we were losing this fight, and I was looking for [the] less-lethal option, to Tase him," she said. But her Taser was gone: "I was tired and losing the fight. I was scared; it was an instant feeling of 'Oh my God.'" Schroeder pulled her gun and fired a single deadly shot. (Earlier, Doyle testified that he didn't know what he would've done in Schroeder's position, but that with the benefit of hindsight he likely wouldn't have shot Rocha. He noted, however, that Schroeder's motivation was in part to ensure that Doyle was alive to go home to his family at the end of his shift.)

According to Schroeder, she did exactly as she'd been trained to do during seven months in the police academy. Schroeder recalled a training session during which cadets were required to run – to increase their heart rate and adrenaline – and then immediately go to the firing range where they were confronted with a series of random targets – some armed, some not – and expected to make split-second decisions on whether to fire. One of the targets was a woman armed only with pepper spray; Schroeder did not shoot – a mistake according to her trainer, veteran Officer John Coffey. "I remember clearly I did not shoot her, and I remember John Coffey standing to my right, scolding me for not shooting her," she recalled Friday. It was the same with Taser training, she said; less-lethal weapons can quickly turn deadly for police officers when they're in the hands of a suspect. "Officer safety is always number one; making sure I'm safe and the safety of other officers," she said. "Now, you know, what are you going to do if you lose your Taser? Are you going to shoot? Yes, you are; that was discussed [during training]."

The testimony of several city witnesses – including Knee, former Asst. Chief Robert Dahlstrom, and independent expert Tom Bevel – seemed to go beyond simple questions of policy, suggesting that, unlike other officer-involved shooting cases, there was no reason to believe that Rocha intended to hurt either officer, and that the situation simply had not escalated to a point where Schroeder had to make any split-second, life-or-death decisions. According to Bevel – a police-practices expert from Oklahoma, who has consulted with APD on several shooting cases, including the 2003 case of Officer Scott Glasgow, who shot and killed Jesse Lee Owens – the trajectory of the bullet through Rocha's body indicated that Schroeder was standing quite close to Rocha, with the muzzle of her gun coming into "loose contact" with his back, and not several feet away, as Schroeder had mistakenly recalled. To her supervisors, that meant Schroeder would've had an opportunity to see if Rocha was holding her Taser before she fired her gun.

Dahlstrom testified that had Schroeder waited until Rocha had actually fired the Taser at her supervisor then she might've been justified in shooting – or at least, he said, she would've had the opportunity to consider all other less-lethal options, "everything from pepper spray to hands-on," he said. Knee agreed: "She not only had time to consider her options, I think she had an obligation to consider her options." Yet both Dahlstrom and Knee testified that none of Schroeder's actions leading up to the shooting – the way she initiated the traffic stop, the way she initially approached Rocha – played a role in the decision to fire her. In other words, until she fired the gun, the majority of her actions were well within policy (save for the arguably crucial decision to carry her Taser in her vest and not on her leg).

Whatever the outcome of Schroeder's appeal, her termination is in striking contrast to other high-profile shootings, particularly the 2003 Owens shooting. In that case, Glasgow was handed a 90-day suspension (the harshest punishment short of termination) – not for shooting Owens, but for violating the department's policies on "high-risk traffic stops" and for using "bad judgment." Knee essentially concluded that had Glasgow made better decisions about how to handle the stop, the shooting likely could've been avoided. But because Glasgow's foolish actions had put him in a situation of imminent harm, his shooting of Owens was ultimately deemed appropriate. In contrast, Schroeder's decisions up until she pulled the trigger were fine, determined Knee, but her final risk assessment was faulty, thus warranting her termination. "I think Julie Schroeder used force inappropriately, resulting in the death of Daniel Rocha. I think that decision was wrong," Knee testified. "As difficult a decision that it was, [that's why] I decided on [an] indefinite suspension."

Beneath the surface of the hearing testimony lies another, subtler but nonetheless troubling undercurrent: the question of whether Schroeder's gender played any part in the termination decision. Cronig has repeatedly raised the question whether Schroeder simply "panicked" – tossing aside reason and training, and instead acting on emotion. While several witnesses – including homicide Det. Art Fortune, who headed up the criminal inquiry into the Rocha shooting – testified that "panic" or "fear" is common in critical incidents, Dahlstrom said that he considered Schroeder's apparent "stress" in the situation a factor in her termination. "The reason is this: If stress caused Officer Schroeder to react in this way, she'd be a huge liability to this department if ever put into this stress again," he said. But while other officers agree that stress, fear, and panic are common physiological reactions to critical situations, they are not factors that have been specifically named in other similar situations – including the Glasgow-Owens case.