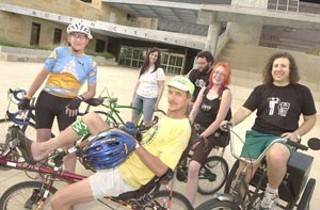 "In most planning and construction efforts, bicyclists' needs are not adequately considered, causing bicycles either to be excluded or hindered."

"Bicycles are an efficient and inexpensive mode of transportation which, with increased use, could reduce dependency on foreign oil supplies, improve Austin's air quality, reduce roadway congestion, and improve the health and livability of the community."

"People who choose to bicycle should not be placed in greater danger than any other legal mode of transportation."

These are not the idealistic musings of a bike activist commenting on Austin's present and future bikability. Instead, they're excerpts from Part One of the city's own Bicycle Plan, intended to increase and institutionalize options for bicycle transportation in Austin. It was adopted just over 10 years ago, in April of 1996, and updated in 1998 to include detailed routes. Reading the plan without having actually bicycled around town, one might guess Austin must be a bike utopia by now.

Well, it's not. In many cases, biking to a destination across town using a relatively direct route ranges from difficult to downright dangerous, and the further out from inner city neighborhoods you travel, the dicier it gets. Equally pathetic, over the last 10 years, while the regional population (Travis, Hays, and Williamson Counties) has grown to more than two million, the estimated percentage of trips made by bike, according to the Capital Area Metropolitan Planning Organization, has remained at a dismal 1%. Since May is Bike Austin! Month, it's a likely moment to consider the thus far unimpressive local progress on improving biking facilities and opportunities, and what might or should be done about it.

Partially to blame for Austin's underachievement as a bike town is our ongoing regional obsession with automobile-centric growth: more cars = more roads = more cars. More specific infrastructure planning – or rather, the lack of such planning – is also involved. Take a ride and you'll find numerous roads with a consistently inconsistent presence of safe areas – whether shoulder space or marked bike lanes – for operating bikes. Where bike lanes do exist, many are perpetually obstructed by parked cars. Major regional highways – I-35, US 183, US 290, et al. – act as imposing physical barriers to bike travel, and where crossings exist, the sparse, busy intersections create acute dangers for cyclists.

Trying to make progress has its own challenges. The city's large bicycle community, as knowledgeable and active as it is diverse and ornery, has lacked a unified voice, and many advocates say they are effectively excluded from city road-planning processes. At the core of the city bureaucracy charged with transportation issues is a Bicycle and Pedestrian program historically hamstrung by wavering political support, staffing, and funds.

It's enough to make a rider take a hike – or worse, abjectly surrender to the internal combustion culture.

"Every person on a bike equals one less car, and every mile traveled by bike equals less roadway wear and tear and pollution," says Austin Bike and Pedestrian Program Coordinator Colly Kreidler. Since taking over the program in 2004, Kreidler said his job description has been simply to finish projects. Although most of the program's current projects (see "In the Works" below) were defined by planners four or five years ago, he says, at the city "there seems to be a difference of opinion about the value of planners." The current staff has none. "The challenge has been staying on top of so much growth and trying to get sufficient notice of road projects," he says, indicating a need for improved communication with city transportation engineers.

In that context, Kreidler points to the difficulty of adding bike considerations to a design after the fact, which will now be the case with the recently redesigned Riverside Drive between South First and Lamar. In general, trying to retrofit bike lanes to a street and its traffic mix limits the choices of preferred bike facilities. And even though a May 1998 City Council ordinance mandated that bike lanes be added to streets intended for bike routes following resurfacing or rebuilding projects, popular but dangerous streets such as 45th, or parts of Guadalupe and Lamar – which appear on the designated bike map – are still without bike facilities. This kind of belated or negligent planning has real consequences, generating daily traffic angst for cyclists and motorists, and often relegating cyclists perforce to the sidewalk – and pushing similar problems onto pedestrians. Unfortunately, given the high traffic volume and limited surrounding space on many Austin roads, adding bike lanes would mean shrinking auto traffic space – an option that isn't on the table, Kreidler says.

Nevertheless, he sees the bike program becoming more successful – given better funding in the next city budget, the addition of a dedicated engineer in three months, and the anticipated hiring of a planner in 2007. Preparations are in motion for a 10-year update of the bike plan, which Kreidler hopes to focus on including areas the city has annexed or sprawled into as well as on weaving off-road paths and bike lanes to connect neighborhoods to nearby schools. 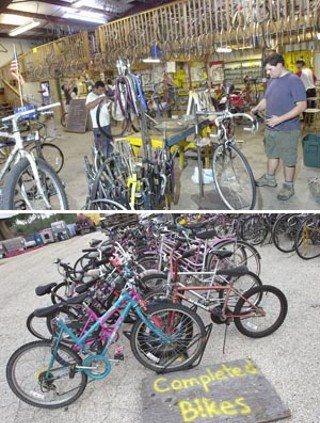 The Yellow Bike Project has been a leader in promoting bicycling as a transportation option. At their workshop, YBP volunteers rehabilitate old bikes in hopes of getting them back out on the streets. (Photo By John Anderson)

Kreidler is certainly aware of the intractable local problem of highways acting as de facto barriers to cyclists, their intersections often transforming easy-access bike routes (with designated bike lanes, wide curb lanes, or quiet residential streets) to pinch points (with both high-volume traffic and narrow lanes). Where shoulders and bike lanes end, cyclists are too often forced to enter fast-moving and big-truck traffic. But such intersections are hard for the city to address, he explained, since they're usually in someone else's right of way, such as the Texas Department of Transportation's.

TxDOT spokesman John Hurt says the "thorny" highway intersections issue is further complicated because "a great deal of intersection right of way is taken up by desirable business property." TxDOT's official position on this problem is that there's "no ultimate solution," as Hurt put it – although the department has met yearly with cyclists, as well as more recently, after cyclist Gay Simmons was killed in April at the intersection of Loop 360 and Bee Caves Road. She was hit by a vehicle as she transitioned from the shoulder, the legally designated space for bicycles, to the busy intersection where bike lanes stop and high-speed traffic merges from an exit ramp. "Even simple projects can take five, sometimes even 10 years, to go from concept to concrete," said Hurt, responding to criticism from local cyclists that TxDOT has failed to act to secure Loop 360's intersections for bikes, despite at least four years of warnings.

Somewhat cynical about official promises and project maps proposing bicycling improvements, local cycling advocate Dave Foster calls Austin "the City of Dotted Lines," referring to the way bikeways still in the conceptual stage are designated on maps. Bike commuter Scott Korcz, president of the 1,500-member Austin Cycling Association, said he's "not satisfied at all" with the extent to which the city has involved the cycling community in road projects. "Frequently we hear about projects too late in the design process" to play an effective role in the discussion, Korcz said. He blames the city's elected officials and staff for lacking what he calls the political, engineering, and resource commitment to improve biking conditions, but he also cites the cycling community's lack of a unified voice. Some self-identified "transportation cyclists," those who bicycle primarily as a mode of transportation as opposed to biking for recreation only, say the ACA doesn't speak for them. "The ACA is almost exclusively comprised of recreational cyclists, heavily skewed towards folks who throw their expensive bikes in the back of their SUV and drive 20 miles to go ride out in the country for a few hours," utilitarian bicycling advocate Mike Dahmus said. "They have at times been an actual enemy to the interests of transportational cyclists."

Divisions within the biking community were widened over last year's controversy concerning designated bike lanes versus wide shoulders during the Shoal Creek Boulevard folly – which ended almost precisely where it began – and, again, over the recent possible revival of a helmet law, in which helmets would be mandated for adults as well as children. Some transportation cyclists argue that helmet laws drastically decrease bike trip numbers, especially for short distances and errands. They point to nations, such as Denmark and Holland, with very high cycle ridership numbers, but no helmet laws. Some bike enthusiasts even shrug at institutional projects, suggesting that bikers take matters directly into their own hands.

"The most fruitful ground for advancing cyclists' safety lies in the cyclist's own skills and equipment, far more than what the city can put on the ground," said local cycling instructor and bike dealer Mike Librik. Although visible bicycle facilities and opportunities tend to be what ultimately turn nonbikers into bikers, education is paramount, cyclists say. "Most important is that the public have a sense of what skilled and lawful cycling is," Librik said. "Cyclists should know the techniques and practice them, and motorists should know what to expect from a lawful cyclist and be ready to deal with it as a norm." The ACA offers several cycling classes, and Librik teaches an urban cycling course in conjunction with the transportation-oriented Bicycle Advisory Council.

Opinions about the balance among safe facilities, education, and technique aside, transportation cyclists widely agree that to ride a bike is to be part of a solution to several of the problems facing our local and national culture, as Michael Bluejay, founder of the information-packed BicycleAustin.info Web site, likes to argue. "I'm not biking to save the world, but because I don't want to contribute to its destruction," Bluejay said.

Bike advocates have made cycling an issue with council candidates, as well as in the pending November bond package, and as more people come to grips with global warming and the terminal condition of our car-centered culture, demand for a bike-friendly city is likely to grow. In the meantime, transportation cycling advocates will keep riding and fighting for better conditions.

"The biggest problem is getting drivers to acknowledge our rights to use roads," said Yellow Bike Project volunteer Jennifer Schaffer. "If we were given a little courtesy and not squeezed in traffic, cut off at intersections, or threatened, it would make a world of difference." One way to achieve this is better road-user education, she said, and another is clearly marked and well-connected bike lanes.

Bluejay believes city leaders' attitude toward bike lanes is representative of the overall lack of importance they place on citywide bicycle transportation. He's even considering a lawsuit to require car-free bike lanes on Shoal Creek Boulevard. "As long as we live in a city where elected leaders say it's OK to park in bike lanes," he said, "there's still a lot to fight for."