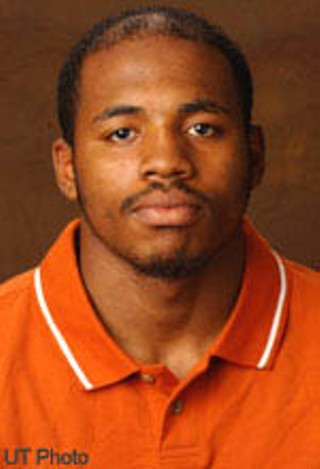 What started with a fight at a Bell Co. pecan farm ended early May 14 with the arrest of 20-year-old UT Longhorn football running back Ramonce Taylor for felony possession of marijuana. According to the Bell Co. Sheriff's Office, deputies were called about a fight, involving as many as 100 people, at a pecan farm in Little River, on SH 95, southeast of Temple, around 1:30am Sunday. On the way to the call, deputies received a second report, from Taylor, who said his car window was broken during the altercation. While interviewing Taylor outside a convenience store in Little River, deputies reportedly received a third report that Taylor had also been involved in the fight and had threatened to return with a gun; Taylor told deputies he was not armed and consented to allow them to search his car. In the car's center console deputies found a live .40-caliber round of ammunition and in the back of the car they found a backpack, allegedly belonging to Taylor, that contained about 5 lbs. of pot. Taylor was arrested and charged with pot possession, a felony punishable by up to two years in state prison. He spent the night in jail and was released on a personal bond Monday morning.

As part of his bond agreement, Taylor must submit to weekly drug tests, reports the Houston Chronicle. His attorney Buck Harris says Taylor was not involved in the fight; Harris told reporters that Taylor was at the pecan farm party for about 10 minutes, but decided to leave after hearing someone make a racial slur. As Taylor drove away an "unknown object" broke the car's back window, Harris said. Harris told the daily that contrary to investigators' allegations, the pot in the backpack was not Taylor's. "If he's carrying five pounds of marijuana, he's either the stupidest man alive or he thinks he's bulletproof," Harris said. "If you have five pounds, you're sure not going to call 911 and give them … permission to search [your] vehicle. A man that does that doesn't know what's in there." Indeed, three other people who were with Taylor were released without charge.

Taylor, a UT sophomore, was part of the Longhorn national champion team and scored a touchdown in the winning Rose Bowl game, but he has not been participating in team activities since March when he was excused from spring drills to concentrate on academics; coach Mack Brown told reporters Taylor will remain off the team at least until the criminal case is resolved.