War of Words – and Tacos – on Airport Boulevard 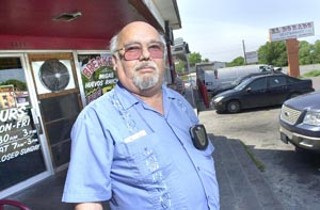 The dark threat of war – or more precisely, food fight – looms over the corner of 51st and Airport, long the domain of an Austin Tex-Mex breakfast institution Tamale House. The property landlord's recent decision to let the tenant next door – El Dorado Meat Market – begin selling tacos as well, and during many of the same hours, has alarmed Tamale House owner Robert Vasquez. "If the meat market has to be something else, why does it have to be tacos?" Vasquez asked. "I don't have a legal leg to stand on. It's a little too much to bear."

El Dorado owner Atticus Macias insists he'll offer starkly different, more authentically Mexican fare (albeit in the form of "tacos") to a more diverse audience, and that it will in fact attract new customers to the neighborhood. Vasquez remains uneasy. The longtime landlord, Julia Sawyer, is elderly and in poor health, so her son Father Don, a Catholic priest, has been handling her affairs. Vasquez said that a meeting last month with Don Sawyer and Sawyer's lawyer was curt and ended abruptly, leaving him with no assurances other than that Macias cannot sell items such as potatoes, eggs, Pepsi, and enchiladas.

To Vasquez, the failed talks, linked with news last week that El Dorado has secured permits to start work on a kitchen, foreshadow a slow march toward taco war. Vasquez is a veteran of comida combat, having battled competitors for much of his nearly 30-year tenure on Airport Boulevard "I can take competition from down the block, or across the street, or from a cart, but not entrenched next door," he said. "The food business is tough, and for someone to do this, it doesn't sit right," especially to a trouble-free tenant of 30 years.

Vasquez said both Don and Julia Sawyer had made verbal promises to him that the tenant next door wouldn't sell tacos or Mexican food. (Don Sawyer didn't return phone messages for this story.) Fear of losing Tamale House – his livelihood – looms large for Vasquez. "I've got nothing else; all I have to look forward to [for retirement] is Social Security."

Macias believes his neighbor's concern is a misapprehension. "It all goes back to what you call a taco," he said, stressing the distinction between what many Texans consider Mexican food and the real enchilada, so to speak. "I asked for a taco when I first came to Texas and they gave me a tostada," he said. He also cites the difference between the Americanized chili con queso – what he calls Velveeta with chopped peppers and onions – and the cubed white queso fresco with cooked salsa he remembers from growing up in Monterrey, Mexico.

"Look around at who's buying [Tamale House] tacos," Macias said. "It's mostly people from this country." He said his clientele will include Mexican nationals, people just as likely to start the day with pork and tripe as potatoes and eggs. "They order something heavy for the hard day ahead, they need a lot of protein so they can make it." He added that his lease prohibits him from selling "breakfast tacos," even if he wants to. Vasquez responds, "They're calling it Interior Mexican, but they're still going to make tacos."

Macias, a partner in Austin-based Cen-Tex Produce as well as in El Meson, the acclaimed Interior Mexican restaurant on Burleson Road in Southeast Austin, said El Dorado will operate a fonda, "a casual place where you can eat, but most of the time you don't sit down – where you see what's being cooked." Tamale House (which does not, in fact, sell Tamales) is roughly along the same lines: Customers file into its basic, rectangular building and place their orders at a metal counter spanning nearly the width of the building. In the background is a huge kitchen, where a throng of women slice, dice, fry, and package at high speed.

Macias said his fonda should be open for business in four to five months, selling "original Mexican food," much like what you'd find in Central Mexico, on the Yucatan Peninsula, or in Oaxaca, including such Mexican rarities as the corn fungus dish huitlacoche. Similar businesses can coexist and thrive side by side, he said, pointing to the cluster of bars on Sixth Street and the car dealerships on Austin's Motor Mile. "I understand [Vasquez's] concern, but once he realizes what we're going to make and realizes that his business is not going to be hurt, he's going to be happy. He should not fear anything," Macias said.