(Don't) Take Them out at the Ball Game

At Dell Diamond, there's more than one kind of boob to be found in the stands. 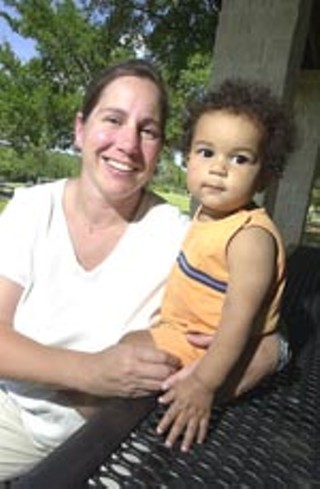 This baseball-loving mom was asked not to breast-feed her son at a Round Rock Express game; team officials have since apologized and said nursing moms are welcome. (Photo By John Anderson)

We all know the old cliché about baseball. It's America's pastime, as American as Mom and apple pie, right? Out at the Dell Diamond, where kids can run the bases, celebrate their birthdays, and receive free bats, balls, and hats upon entry to the stadium, the whole family is welcome. Well, as long as good old Mom doesn't unfasten her bra and start feeding her nursing babe, that is. In Round Rock, it seems, that's downright indecent. Or it was until last week, when a Mom doing just what comes naturally was first nearly ejected from the premises and then asked to hide. Only afterward, in the wake of a very public embarrassment, did the head Rocks apparently come to their senses and vow henceforth to welcome nursing mothers – as required by Texas law.

It all started innocently enough on Sunday, May 7. While the Express battled the Omaha Royals in a scoreless tie, a nursing mother, who wishes to remain anonymous, began nursing her infant son in the stands. She was approached by an usher who informed her that there had been a complaint against her, and she was invited to move to a private area. The mother refused and was then told that she must leave her seat, that under no circumstances would she be allowed to nurse her child there. According to the woman's partner, the two options available to the family were to move to the First Aid station to nurse (which precluded watching the game) or leave the park and get a refund. "If she refused and sat in her seat and nursed," explained her partner, "we were told we would be escorted out of the park." The family, who had brought their oldest son's entire second-grade class to the game, was ultimately escorted to a luxury box by Express vice-president and general manager Dave Fendrick – but asked not to nurse on the balcony.

Apparently unbeknownst to the powers that be at the Dell Diamond, Chapter 165 of the Texas Health and Safety Code – state law, that is – "recognizes breast-feeding as the best method of infant nutrition [and assures a mother's right] to breast-feed her baby in any location in which the mother is authorized to be." This applies to both the workplace and public businesses, although private businesses are allowed some discretion in enforcement. Because the Dell Diamond was paid for in part with public funds, the team was apparently in direct violation of state law.

But that might be the least of it: Cue outraged howls from various mothers' communities and networks in Austin. There were calls for boycotts, or, beyond that, a "nurse-in," like the one that took place at a local Starbucks last year following a similar incident. Indignant letters started flying to Fendrick. Ergo, cue Express-speed backpedaling.

"We were unfamiliar with the statute and the importance of breast-feeding," Fendrick said. "Since then we have been enlightened and understand the importance and significance of breast-feeding, for both the mother and the baby, and will have private areas available for nursing mothers." Indeed, on Tuesday, May 9, the following amendment to the "Stadium Policies" section of the Express' Web site appeared: "The Round Rock Express welcomes mothers who want to breast-feed in the Dell Diamond. The Round Rock Express have privacy areas available, or mothers may breast-feed in any public location of the Dell Diamond. All members of the Express staff will support the needs of breast-feeding mothers in this regard." If someone is offended by the sight of a mother nursing her child, "we will offer them the opportunity to relocate," Fendrick claimed. And if they don't want to relocate? "They're just gonna have to turn their head and not watch," he declares. "We're not asking the mom to move."

Admirable as the sudden Express turnabout may be, it begs yet another question: If we as a culture are so obsessed with so-called "family values," why is it that the sight of a woman nursing her child is so darn offensive to the public eye? Especially within the context of a sporting event, where boobie-centric advertising – whether TV beer ads or the Sports Illustrated swimsuit issue – is the rule rather than the exception? Moreover, in most cases when a mother nurses her child, an onlooker is more likely to catch a glimpse of postpartum belly flab than breast tissue.

Perhaps it's that whole virgin/whore dichotomy of Western culture, currently receiving saturation coverage in The Da Vinci Code. If she's not draped seductively over a motorcycle or walking around with her cleavage grazing her chin and her thong playing peek-a-boo, an American woman had damned well keep her womanly assets – all of them – covered up.

Here's an alternative suggestion to those who find public breast-feeding offensive, even at the old ball game: The next time you see a woman nursing in public, remember that your mama taught you that it is impolite to stare. Or, consider eating your nachos in the bathroom (or the First Aid station) while reminding yourself that Jesus was breast-fed. Or just mind your own damn business and watch the game.