2006 Election by the Numbers

Tweet
print
write a letter
Now, that's what they call a "mandate." You have to go back to 1979 to find a regular City Council election that was more lopsided than this one. After one of the more expensive campaigns in recent Austin history – mostly for and against Propositions 1 and 2 – those who bothered to vote made quite clear that they're not really very dissatisfied at all with the state of local politics. Let's go to the tape:

* So far there are no official turnout figures, in part because of the complexities created by all the overlapping jurisdictions – some of which split individual precincts – that held elections on May 13. (For example, a number of boxes technically have city of Austin voters but recorded no votes in the city races, although they did report returns for Prop. 2 or the ACC races or for the neighboring school districts.) We've estimated turnout for the Travis County boxes based on voter registration as of the March primary, coming up with a typically anemic 12.1% overall. (One wonders what turnout would have been without Props. 1 and 2 to fight about.)

That in turn breaks down in the usual fashion – Northwest, Central, and Southwest (in that order) beating the average and North, East, and South/Southeast (in that order) trailing behind. The contested races for Places 2 and 6 seemingly did little to motivate turnout in the majority-minority boxes. Early votes accounted for the usual 30%–40% of total turnout.

No, Will Wynn didn't do quite as well as Kirk Watson did in his re-election cakewalk in 2000. (In percentage terms, that is. Wynn pulled down more actual votes than any mayoral candidate since Roy Butler in 1973.) Considering he was running against a two-term City Council incumbent, it's no mean feat for a mayor whose leadership has not been without its critics, including the vociferous and well-funded backers of the failed charter amendments. Danny Thomas' "campaign" did allow him to carry a few boxes in East and Southeast Austin, but Jennifer Gale beat Thomas in more boxes (particularly Central) than Thomas beat Wynn.

Much the same story for the putative favorite in the next mayor's race, Brewster McCracken, who achieved his goal of not being embarrassed by a too-narrow victory against a bunch of underfunded amateurs. Like Wynn, McCracken only pulled below 50% in nine boxes, although they were nine different boxes. McCracken, like Wynn, pulled his lowest percentages in the East and Southeast, where he was more effectively (relatively speaking) tag-teamed by Mark Hopkins from the right and Touvell and Kalmbacher from the left. Hopkins' around-15% result can plausibly be filed away by election mavens as a future benchmark of "the toll road vote."

Apparently, getting the Statesman endorsement was too little, too late for Darrell Pierce, whose campaign had to play catch-up from the get-go with Sheryl Cole's six-months-or-so head start. (As with almost all the races, there was little difference, even at the box-by-box level, between the early vote percentages and the e-day results.) Since this has been an issue in past elections – especially for many of the East Austin eminences who in this go-round backed Pierce – let it be noted that Cole won the Eastside handily. While Cole pulled under 50% in 26 boxes, Pierce only pulled over 50% in 10, all in the suburbs. And DeWayne Lofton's career as a run-off-inducing spoiler was (probably lucky for him) over before it began.

This was a much wilder affair and the only race with a dramatic difference between the early and e-day results (which is why we broke them out in the attached chart). Unfortunately for Eliza May, none of that shifting went her way; as she no doubt realizes now, she was really running against Wes Benedict for a run-off spot against Mike Martinez. Why the May campaign underestimated Benedict – as she herself suggested on election night – is somewhat of a mystery, since he and fellow Anglo-Libertarian Steven Adams took bites of equal size out of Danny Thomas and Raul Alvarez three years ago.

On the other hand, if Benedict had worked a little harder to get some voters out on election day, he might have grabbed a run-off spot himself. (That would, of course, require raising and spending money, which is not his thing, even though he's hardly a fringe candidate anymore and certainly has a better rep than most local Libertarian hopefuls.) The winner's 10-point climb on e-day – which translates into about 3,000 friends of Mike Martinez who might not have showed up otherwise – reminds us that elections do still get won on the ground, and/or that people like fire engines.

There's not much left to say here except "Ouch." There's no hidden pattern the Clean Team can tease out of the results that can make them feel better about their $30-a-vote performance (OK, $15 or so if you count Props. 1 and 2 separately). They just got beat. Bad. Everywhere. Even the few boxes that did go for Prop. 2 were more than willing to hang its companion measure out to dry. Check out the maps for more.

What a difference 12 years makes; perhaps all the hardcore godbags now live outside the city limits. To be sure, the purple elephants in the North, Northwest, and Southwest were a little more likely to look askance at what Sammy Allred damned back in 1994 as "shack-up insurance," but there's no sign of the kind of wave of drive-by Christian voters who gave us the amendment that we've now kicked to the curb.

Because so much of suburban Austin now lies outside of AISD, central-city voters have more power in school-board races than they do in council contests, and that's where Annette LoVoi really pulled away from Ed Leo in the night's closest matchup. Meanwhile, Karen Dulaney Smith won without any apparent exertions, with margins of at least 2-1 everywhere but Southeast (not surprising when running against a Latino candidate).

The reverse dynamic is true for ACC, which includes a bunch of North and Northwest boxes (stretching well into Williamson County) that aren't in either the city or AISD. It was in these suburban precincts where Rodney Ahart and, to a lesser extent, Ana Mejia-Dietche saw their campaigns come undone. 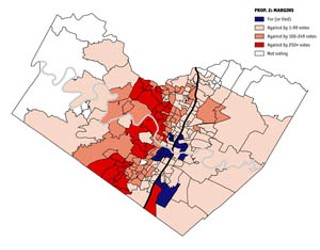 Of the 230 boxes that got to vote on Prop. 2 – in the Austin ETJ, as well as within the city limits – the "Save Our Springs" amendment managed to break even in only 21 precincts. (The companion Prop. 1 only won or tied in five boxes.) Three of these were in Williamson County and aren't shown on the map. The rest can be found in some obvious stomping grounds – the heart of 78704 and the UT campus – as well as Cherrywood, Central East Austin, the Riverside Drive student ghetto, and Dove Springs. Of those, only one – Precinct 332, Zilker Elementary – endorsed Prop. 2 by more than a 100-vote margin. (The best Prop. 1 did was a two-vote victory in one Williamson County box.)

Compare that to the 81 boxes – all but four of them west of I-35 – in which Prop. 2 went down to defeat by more than 100 votes. Remember, this was a contest that campaign polls said was too close to call on election eve. While mapping actual votes, instead of percentages, shows the influence of overall turnout, as well as sentiment about the measure itself, it's worth noting how many traditionally left-leaning power boxes (Hyde Park, Clarksville, Rosedale, etc.) failed to follow the lead of Zilker and Travis Heights. 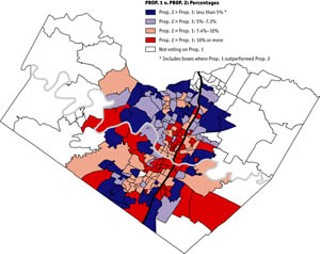 Prop. 1 got hammered even harder than Prop. 2, which was expected; the Open Government amendment managed to out-perform the SOS measure in only four boxes, while tying in five others. But given that both sides more or less consistently campaigned for or against the two measures as a set, the variation in voter response to each is notable. It's not surprising that an "anti-corruption" measure would appeal to a different kind of voter than a "pro-environment" measure, and so the second map shows.

Citywide, Prop. 2 out-performed Prop. 1 by 7.4%; so the red boxes are those where Prop. 1 did worse than average, and the blue where it did better, relative to its companion measure. Almost all of the boxes where Prop. 2 actually won (as shown on the other map) are deep red here, a sure sign that the SOS Alliance-led coalition really failed to make the sale on Prop. 1 to its core constituency. But so are many other boxes, including a big string of lakeside precincts which failed to plump for "saving the springs" but probably hated spending millions in tax money even more. Conversely, while many of the deep blue boxes here, particularly those on the west side, are ones where both props went down in flames of equal heat, there are also many other such boxes – such as those in the east and north – where voters evinced some degree of sympathy for the anti-corruption message. Not enough, obviously, but some. 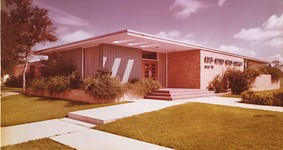