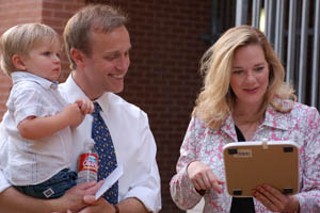 People of Austin, listen up. M.C. Cracken (™Wells Dunbar) is in the house … again – representing we the public on the City Council for another two years. Winning 72% of the total vote for Place 5, it was hardcore Cracken time Saturday night, especially at Jo's Hot Coffee and Good Food on Second Street, where Brewster McCracken and crew partied down with the peeps of Prop. 6 – those behind the victorious campaign to get public health care benefits for the partners of unmarried city employees. We'll "start right away and make these benefits available to our city employees," said McCracken of the proposition, which passed with 68% of the vote.

Among other things he'd like to accomplish over the next couple of years, McCracken said he hopes to join the Capital Metro board because "we need another rail election." With retail gasoline prices up to $3 a gallon in some places and no clear signs of prices leveling off at any point in the near future, Austin needs an urban rail system to complement its commuter rail system, he said. "If [we] fail to act in the very near future … people will say, 'Why weren't you ready for it?'" he said in reference to escalating fuel prices. He also longs to make Austin an even bigger player in the national film industry than it already is. "Some city is going to emerge as the competitor to Hollywood," said McCracken, and he thinks Austin should be that city.

The remainder of the Place 5 vote broke down this way: Mark Hopkins pulled in 14%, Kedron Touvell 9%, and Colin Kalmbacher 5% – ouch. No doubt it's Cracken time.