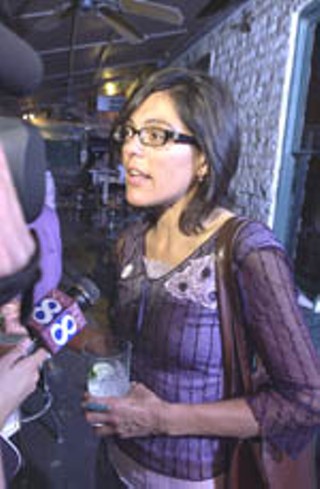 Ann del Llano of the ACLU was an aggressive promoter of Propositions 1 and 2. The "Clean Government" and "Clean Water" charter amendments were soundly rejected Saturday. (Photo By John Anderson)

Early Saturday evening, when it was clear that Props. 1 and 2 were toast, Bill Bunch set his iced tea down on the table and moved across the hall, where the band was striking up another set. "Anybody wanna dance?" he asked brightly, before disappearing into a small cluster of bodies on the dance floor. Bunch may be the most roundly despised man of the moment, but what's not to love about a man who can cut a rug when the chips are down?

Beyond the cheerful strains of music, the mood of supporters gathered on the second floor of Opal Divine's on Sixth was decidedly low-key as the election results rolled across the TV screen blinking in the corner – results that would eventually show Prop. 1 getting only 24% of the vote and Prop. 2 getting 31%. Before long, folks stopped watching the TV altogether and repaired to the patio to commiserate over pints of beer. The band played on.

Two days later, Bunch, recuperating from the campaign and the crushing defeat with a week's R&R, assessed some of the damage and owned up to a few strategic errors. Topping the list of mistakes was the failure to include more people in crafting the proposed charter amendments, he said. "The urgency we perceived in the immediate threats to Barton Springs did not justify bypassing a more inclusive process," he said. "We needed to do more outreach up front and early on."

As a result, the amendments' muddled language provided ample ammunition for the opposition to attack from all angles. "The hostility from the Chronicle was a huge factor [in the defeat]," Bunch said, adding that this paper's persistent attacks on the language, among other things, "were very legitimate and ultimately persuasive to voters."

Where does the Save Our Springs Alliance go from here? That's for the board to decide, said Bunch, who is one of the original pioneers. "The board will rethink everything. Very likely there will be a greater emphasis on producing education tools that help citizens and decision-makers see the choices we have, and [developing] more close working relationships with others."

For former state Rep. Glen Maxey, who managed the Clean Water, Clean Government campaign, the most frustrating thing about the effort was the city's stiff resistance to the two initiatives. "When the petitions came to fruition and we sat down with the city manager and some council members and said, 'Let's work out a clean compromise to get to the goal,' they all but told us they would take down Prop. 2 [the Save Our Springs amendment] by leaving Prop. 1 [open government] in its current format," Maxey said.

With that, the city's cost estimate of $36 million to implement Prop. 1 turned out to be the opposition's best weapon. "That was the most difficult to overcome," Maxey continued. "They put out a number and it stuck. In political consulting, all you need to do to defeat a proposition is find one thing to cause doubt. The cost was the biggest thing. So it became a case of, 'If we pass this there'll be no open-space bond, there'll be no housing bond, we'll have a tax increase, and it will destroy the city.' There were just a million ways to hit the constituency groups with that sort of misrepresentation. That was our Achilles' heel right there."

Longtime progressives on opposite sides of both charter amendments do agree on one thing: The campaigns stirred up one of the biggest – if not the biggest – family feuds that anyone has seen in more than a decade of environmental battles. Still, Maxey believes it's just a matter of time before both sides are standing together again on the issue of watershed protection.

He's less optimistic about the open-government issue ever making headway at City Hall. "That's a dead duck, from my perspective," he said. "They're not going to answer the concerns of the community in trying to deal with police oversight. And they're not going to walk away from the business-as-usual of people coming to the trough for sweetheart deals. It's a way of life – there's a lot of money in it – and the mayor and this council certainly didn't show any concern about that through this process," he said. "But it doesn't change the fact that citizens of Austin are getting a raw deal." 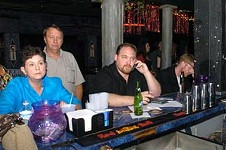