When you vote on Saturday, keep in mind the real soul of the city

A couple of weeks ago, those earnest folks at Liveable City issued a pair of "ballot studies" analyzing the two major propositions on this week's ballot. In keeping with the organization's studious and diligent reputation, the analyses are copiously detailed, based on extensive research and interviews with all sides of the debate, and come down firmly in the middle on what should be done concerning the complex charter amendment proposals – win or lose. In issuing the studies, the Liveables (who could use a spell-checker) explicitly hoped to find some compromise ground in the now thoroughly polarized debate over Props. 1 and 2, aka the "open government" and "clean water" amendments. "In these polarized debates, it's hard to find information independent of the campaigns," announced leading Liveable Mark Yznaga. "We hope Austinites use these studies to help make up their own minds about possible changes to our charter – Austin's Constitution."

It's a perfectly rational position, and I recommend the studies (available at www.liveablecity.org) for those Austinites still pondering the imponderables as they approach Saturday's election booth; they will provide you with the details you might otherwise have received in a sensible democratic procedure. Unfortunately, despite all the good intentions of the Liveables, an election campaign is a far from rational process. For present example, not 30 minutes after the studies were released – not long enough even to read the damn things – we received a press release from the amendment supporters at "Clean Austin," announcing that the Liveable City study "demonstrates that the Open Government Online Charter Amendment [Prop. 1] ... would cost just $2-3 million to implement. ... [and that] the City of Austin has now confirmed Liveable City's cost estimate."

In fact, of course, the study had demonstrated nothing of the kind. Instead, it proposed a more rational middle way, in which the scope of the amendment as written would instead be whittled down to a sensible online project, and it is that project that city staffers estimated could be done at a reasonable cost, and of that project that the entirely self-appointed Austin Cleaners suddenly declared – like Pee-wee Herman after falling off his bike – "That's what we meant all along."

Unfortunately, that project is not on the ballot. However you vote this Saturday, please don't delude yourself that an eminently reasonable open-government proposal – one we could all get Liveable with – is one of your ballot choices. It ain't on there.

I'm a notoriously bad handicapper – I had no idea the Chronicle's publisher was even running in the Kentucky Derby – so I won't predict Saturday's winners. But if Props. 1 and 2 are victorious (and of course lost in all this children's crusade are the remaining, rational propositions, not to mention the actual council and board candidates), I think the City Council should call the proponents' bluff. They should budget no more than $2 million to implement the props, and if it only pays for what is already in the works – e.g., the ongoing attempt to streamline and upload planning documents – then so be it. Indeed, we've been repeatedly promised the props will save money, so perhaps we should budget no money at all, and transfer the purported savings to library books.

But I have watched enough council meetings to suspect that the city attorneys will counsel deliberation, the staff numbers will be crunched, the RFPs will be issued as the amendments actually and grandiloquently read, and in a few months – while we wait for the other green Blahnik to fall – bond and budget planning will be put on hold until the "open government" and "anti-AMD" bill comes due. And the very same people who appeared before the citizen's bond committee demanding open space acquisition as though they were the only people on earth who'd ever thought of it – only to be welcomed with widespread arms – will be loudly demanding to know why the council isn't protecting the Springs, and where the money for open space is, and why some secret deal they weren't personally informed of via e-mail postponed the bond election.

This might have been an election about the whole community's long-term priorities.

It happens to coincide with a broadly public bond initiative, we're enjoying relatively flush times, and there are large, tangible needs – infrastructure, libraries, affordable housing, open space – for which there is quite a broad community consensus of support, and the divisions of opinion are primarily over how much we can afford across the board, and how to adjust accordingly. We could still be engaging in the energetic public discussion initiated by the citizen's bond committee, quizzing the council members (and candidates) about particular proposals, and trying to decide – from Decker Lake to the Y, from Northwest Hills to ABIA – what should be the common institutional priorities of this community, and not just one privileged part of it.

Instead, as our council watcher Wells Dunbar points out next door ("Beside the Point"), when the staff proposed to council last week its own proportions for affordable housing and open space – let's call it 50-50, they said, and then duck – virtually nobody was watching, "in real time." Instead, we're arguing like old country banshees over whether it would be a good idea to wire up the mayor, council, and city managers, et al. with a baby cam, so they couldn't talk to anybody without us all knowing about it, instantly. That's why we elect them, after all – so we can treat 'em like criminals, for public amusement.

The e-mail flame wars – richly and comically represented in this week's "Postmarks" – will begin to subside next week. Having spent weeks covering what has become, even by Austin standards, a transcendently goofy election (and postponing far too many other pressing stories in the bargain), I now respond to everyone asking me, "Yes, I'm ready for it to end." And I've even received a few sub rosa apologies from folks who say they're sorry things have gotten out of hand, that the name-calling was unintentional, that the accusations of corruption against all and sundry opponents of "cleanliness" are just a little bit over the top.

Hey, it comes with the territory. But it seems to me that, whoever "wins," much of the (hopefully temporary) damage to the common public discourse and to the real "soul of the city" – that is, all the people of Austin, working together for the common good – has already been done. And whatever happens afterward, those who wilfully sow the wind shouldn't then presume to apologize for the whirlwind. 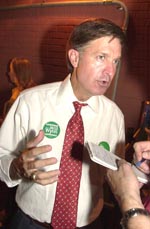