Community's mayoral race just a snippet of larger, incestuous tale involving some of Austin's most prominent players in regional planning, politics, and pork

Finger-pointing over a costly wastewater system has taken sewer politics to a whole new level in the city of Rollingwood, where the multiheaded debate is expected to figure strongly in the outcome of a heated mayoral race in Saturday's election.

The campaign fracas, pitting Council Member Bill Hamilton against incumbent Mayor Hollis Jefferies, centers on the sound-bite question of which candidate can best promote smart development along Bee Caves Road while preserving the leafy charm of this 1950s-era hamlet west of Zilker Park. In truth, though, the mayor's race is just a snippet of a larger, incestuous tale involving some of Austin's most prominent players in regional planning, politics, and pork. For better or worse, these varied interests, along with an assortment of potential conflicts and hurt feelings, just happened to collide in Rollingwood, home to some of Austin's most educated and politically vocal citizens. "It's like this nasty brother-in-law deal that went sour," one old-timer mused the other day. "As long as we're all friends, there's not a problem. But if we stop being friends, there's a problem."

As the Chronicle first reported last week, Rollingwood residents have seen their wastewater bills nearly double since the Lower Colorado River Authority built a new sewer line connecting more than 500 homes and a couple dozen commercial businesses to the city of Austin's wastewater system. The project, which kicked off in 2000, was originally estimated to cost $7.2 million and take two years to complete. But the price tag grew to $17 million and spanned several years, stopping just short of the courthouse. The sticker shock was made more painful a year ago when city officials learned they had more in common with the agency than a high-priced sewer line: Both entities had been longtime clients of Armbrust & Brown, one of Austin's biggest development law firms and an old soldier in many environmental wars. With the Armbrust firm wearing two hats, one as Rollingwood's longtime legal counsel and the other as LCRA's longtime lobbyist, things were bound to get sticky.

They did. But this is where the facts of the story turn murky. Armbrust & Brown insists that it informed Rollingwood officials of its LCRA ties when it first began negotiating the sewer line contract on the city's behalf, circa 1999 and a few city administrations ago. But Rollingwood officials, for the most part, say they only learned of the firm's relationship with LCRA a year ago, when the financial dispute appeared spiraling toward litigation. The general sense, at least privately, is that Armbrust & Brown may have compromised Rollingwood's standing in both the original contract and the ensuing dispute over cost. 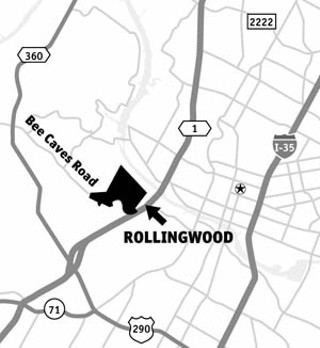 Armbrust & Brown managing partner Gregg Krumme defends his firm's representation of the city and takes issue with the assertion that officials were shocked to learn of the firm's ties to the LCRA. "I'm going to disagree with them," he said. "I'm sure there were discussions about that. I'm sure they were aware." (If the firm provided written disclosure to city officials at the time, no one seems to know about it. At press time, Armbrust & Brown had not yet responded to a request for a copy of such a document.)

Needless to say, the sewer mess has splintered a longtime partnership between Armbrust & Brown and the city of Rollingwood. The relationship, which ended abruptly last month, formed some 15 years ago, when Dick Brown (no relation to the Armbrust firm) served as Rollingwood mayor before moving on to a lobbying gig of pushing Austin-bashing bills at the Legislature on behalf of Armbrust & Brown and its development clients. The breakup came shortly after the city hired Broadus Spivey, a prominent Austin malpractice lawyer who, according to city documents, was brought in "to pursue claims and possibly settle claims relating to those professional services rendered in connection with the wastewater collection and transpiration agreement between the city of Rollingwood and the Lower Colorado River Authority."

This time, Armbrust & Brown was caught by surprise. The firm responded in writing April 3: "Given the current relationship between the City and Armbrust & Brown, LLP, we propose the City obtain new general counsel and city attorney representation as quickly as possible." Krumme acknowledges being miffed over the city going behind the firm's back and hiring Spivey, who is considered one of the top malpractice lawyers in the state. To Armbrust & Brown, the hiring was a clear message that Rollingwood no longer trusted its general counsel.

Chronicle readers familiar with the local political landscape will not be surprised to read that former Mayor Kirk Watson landed the role of the guy who rode in on a white horse and went to bat for the little guy – Rollingwood, in this case. In April 2005, with Rollingwood and the LCRA hopelessly deadlocked over the cost of the project, Armbrust & Brown checked itself out of the dispute. So the city hired Watson and his former law firm to mediate the situation. Five months later, the city and the LCRA agreed on a compromise, with the city's financial obligation to the agency whittled down to about $70,000 a month, instead of $144,000 a month. Watson wouldn't talk specifics about the case, but handed the credit to Rollingwood officials. "They were very detail oriented in picking their way through the case, and they ultimately achieved the best deal they could under normal circumstances," he said.

Absent from the council's negotiations, however, was Mayor Jefferies, who, citing a potential conflict, recused himself from the matter about the time that Armbrust & Brown bowed out of the picture. Jefferies manages the Austin office of financial consulting giant AG Edwards, which also does business with the LCRA and employs a former LCRA board chairman, Steve Rivers.

Getting back to this story's initial hook – the mayor's race – Jefferies and his supporters accuse the Hamilton camp of trying to drag the mayor into the sewer controversy all over again in order to win votes. "This is much ado about nothing," Jefferies said. "They want the residents of our city to believe that they're going to go in and renegotiate the [LCRA settlement], but it's a done deal." Jefferies, who served about eight years on the council before winning the mayor's seat two years ago, says he doesn't recall precisely when the Armbrust & Brown/LCRA relationship came to light. "I'm not sure even when they told us," he said. "I was pretty much out of the loop with Watson's group and their dealings with the LCRA." That Jefferies has essentially washed his hands of the Armbrust & Brown/LCRA affair is all the more reason Hamilton and his supporters say it's time for a new mayor. Hamilton's role in the LCRA negotiations and his push to hire the Spivey law firm could play well with voters looking for some relief on their wastewater bills and an end to business-as-usual at city hall. "I was involved in all phases of the negotiations," Hamilton said. "So the question is, who's best prepared to lead us forward?"