Tweet
print
write a letter
Inevitably, elected officials will disappoint a portion of their constituency. Only in a country as renowned for its democratic harmony as say, Iraq, can a candidate hope to carry the full 100% of the electorate, as Saddam Hussein did in 2002 (see: sarcasm), but in a political body as socioeconomically diverse as Austin, total appeasement is impossible. It is, therefore, admirable that the organization known as Austin Interfaith attempts to present an ecumenical voice for citywide governance.

AI, a collective of schools and religious organizations, held an "accountability session" on Sunday. This forum presented the organization's agenda to candidates for the AISD and ACC board of trustees, and City Council. Instead of the typical stop many of these politicians are used to, AI narrowed the campaign's scope to specific concerns they want their future representatives to address once they get elected. In other words, AI isn't only interested in what these politicians are promising; this forum was a chance for a group of assembled citizens to tell the people who will be representing them what they want, directly.

With diverse membership like Govalle Elementary parents in East Austin and First United Methodist Church due west of the Capitol, AI presented to candidates a list of questions seeking confirmation about concerns as specific as stoplights in highly congested traffic areas to a resolution "declaring Austin to be an immigrant-friendly city." With few exceptions, the candidates endorsed AI's agenda without question.

Unfortunately, it is unclear whether this was due to the justness of the presented agenda or to the session's format. Candidates had only a little over a minute to respond to four to six highly detailed questions while scorers for AI labeled their responses as simply a "Yes" or "No." Speaking first, Barbara Mink tried to explain why it was not within the ACC board of trustees' power to expand a college readiness program that AI wanted opened to more applicants. "It would violate our own policies," Mink explained. Even though Mink said she agrees with the policy in principle and would do what she could to comply, the scorers for AI marked her response down as a "No." It would appear that after Mink's mishap, other candidates chose to answer with a simple "categorical yes to all questions."

"I don't particularly like this format," said Vincent Torres, running unopposed for the District 4 AISD board position, "One minute does not give [us] enough time." Of the 24 assembled candidates, only Torres, Mink, and incumbent Mayor Will Wynn responded negatively to any of the questions. Wynn's remarks caused some palpable tension with the moderator and audience. Insisting that he would "never make a specific promise on spending … in a campaign," Wynn was the only speaker who felt comfortable enough to have most of his answers labeled "No." Because of his short time on stage, it was unclear if Wynn intended to follow up on AI's demands, whether he saw their merit or not.

"This is one of the realities of dealing with 20 candidates," said Austin Interfaith organizer Kip Bobroff. He explained that the only way AI could gather 20 politicians for a day in the middle of campaign season was to promise equal speaking time and an audience of approximately 300. 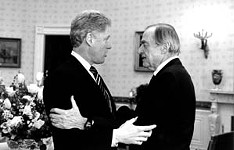 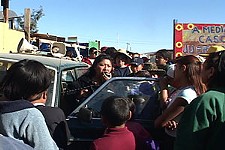