Day Without an Immigrant work stoppage and boycott draws more than a million people into the streets nationally; thousands turn out locally 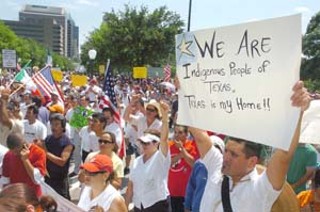 Immigrants and their supporters mobilized once again on May 1, including here in Austin at the Capitol. (Photo By John Anderson)

A flood of flag-waving, sign-toting immigrants and supporters poured out of the Capitol's front gates onto Congress Avenue Monday afternoon, chanting rallying cries like "¡Si Se Puede!" as they turned left onto Cesar Chavez, aptly named after the Mexican immigrant who popularized the saying as founder and longtime president of the United Farm Workers union. "César would be proud," remarked local activist and co-owner of Las Manitas restaurant Cynthia Perez, near the corner of Chavez and Waller, a little beyond the halfway point of the march from the Capitol to Cantu Park at 2100 E. Third. The march and its proceeding rally were part of a national effort to call attention to immigrant and workers' rights. Billed alternately as the Great American Boycott and A Day Without an Immigrant by the National Immigrant Solidarity Network and other organizers, the much-anticipated May 1 work stoppage and boycott drew an estimated 1.5 million people into the streets. (The Associated Press reports 1.1 million, based on police numbers.) In Austin, organizer Silky Shah estimated almost 8,000 people showed up at the Capitol and that many more joined the group during the approximately 2.7-mile March and at the park.

"It was a lot bigger than I thought it was going to be," said Shah, alluding to fear in the local immigrant community generated by numerous stories of immigration enforcement raids after the April 10 rally, for which an estimated 10,000 people turned out. Immigration and Customs Enforcement hasn't confirmed or denied that it has stepped up enforcement post-April 10. An e-mail statement from Nina Pruneda, spokeswoman for the regional office of ICE in San Antonio, said ICE "is responsible for investigating a wide range of domestic and international activities arising from the movement of people and goods in violation of the nation's immigration and custom laws. ICE agents conduct operations every day in locations around the country as part of their efforts to protect the nation and uphold public safety. These operations are not random sweeps, but carefully-planned enforcement actions that result from investigative leads and intelligence."

Degrees of truth and fiction aside, the roundup stories had enough people worried enough to get local activists and city officials to hold a press conference to, among other things, remind Austinites that APD, like many local police agencies across the country, doesn't engage in immigration enforcement; the department views that as the job of the federal government. Instead, APD treats immigrants – documented or not – like any other city resident: If you commit a crime you're a criminal; if you don't, you're not.

Indeed, APD has diligently worked at making inroads in the immigrant community in order to encourage undocumented immigrants to report crimes to the police. Led by Assistant Chief Rudy Landeros, APD was among the first in the nation to convince local banks – notably Wells Fargo – to offer undocumented immigrants without a Social Security Number or a state driver's license a chance to open bank accounts under a program titled "Banca Facil," or "Easy Banking." The new program cut down significantly on the number of robberies of recent immigrants, who became prey because they regularly carried significant amounts of cash. (In 2000, Latinos only made up 31% of Austin's population but were victims in 39% of all robberies.) And in 2004, APD created the Immigrant Protection Unit, responsible for investigating human trafficking and other crimes against immigrants. "Our job is to protect and serve, regardless of [immigration] status," Landeros explained in 2001.

Twenty-seven-year-old Adrian Barrera – who came to Texas from Morelos, Mexico, eight years ago with his parents, wife, daughter, and brothers – didn't appear worried about his security as he waited near a cluster of waving light blue Guatemalan flags for the rallying on stage at Cantu Park to end and the music, theatre, and the evening's other cultural performances to begin. "I'm living here illegal. I've been living here eight years without going back to my country because [I'm afraid] I can't come back," said Barrera, when asked why he marched. He said he went to his job with a local plumbing company but got off early for the event.

It's hard to get a real figure for how many undocumented workers – locally and nationally – decided not to show up for work, but there is indication that their absence was felt most prominently in the meat-packing industry, since Tyson Foods and Cargill shut down plants for the day. May Day, or International Workers' Day, is a globally acknowledged labor holiday that marks the 1886 Haymarket Riot in Chicago, during which demonstrators – many of them immigrants – rallied for a five-day, eight-hour-a-day work week. The holiday isn't recognized by the U.S. government.

An unknown number of local businesses and work sites were dead on Monday – either voluntarily or involuntarily. Perez said there was never a question of whether Las Manitas would close for the boycott. "I think it's a good thing to get people to demonstrate their voice in issues. I think that's the American way," she said. Some local construction sites looked abandoned.

AISD was quiet on Monday, with none of the massive walkouts that characterized April. However, the district did suspect a higher level of absenteeism, suggesting some students took the day off to protest. Fourteen-year-old Claudia Arrellano – who, along with family members, chanted "ÁSi Se Puede!" at the Capitol and held a homemade poster reading "No Human Being Is Illegal" – skipped classes at Americo Paredes Middle School in South Austin on Monday. "We all came from Mexico, so we all have to be together. … We all go to the same school and we all drink from the same water fountain and everything, so we have to be the same," said Arrellano, between cheers of "ÁQue vivan los imigrantes!" and "Today we march, tomorrow we vote," braces gleaming in the sun.

If any teachers were tempted to ditch school, AISD nipped that in the bud. In an April 25 memo, Superintendent Pat Forgione warned teachers and staff that those who called in sick Monday without a doctor's excuse wouldn't be paid and could be disciplined or fired. "We ask that you show your support for the immigration cause in ways that do not negatively impact students' learning environments," he wrote.

Not all immigrants were gung-ho about the boycott. Charlie, an Armenian immigrant who owns the Cigar Palace on Congress, said immigrants should come to the U.S. legally. "The only way to win the battle is to join them," he said. "I waited over 13 years to come to the country legally." He kept Cigar Palace open, but the fact that Congress was completely blocked off during the march made him lose business, he said. "I'm not bitching about it, but that's not the way to do it."

Like many a Mexican-American, Esperanza Trujillo said she isn't sure how she feels about undocumented immigration. "I don't know. I'm kind of in between," she said, as she watched the mass of people march down Cesar Chavez from her front porch with grandson Eric and neighbor Armando Alvarez. "It's OK for those who want to be good citizens, and then you have those …" For better or for worse, the march down her street made quite an impression. "All these people!" Trujillo said to Alvarez. "I knew there were Mexicans, but not this many."

With the windows of her light-blue pickup rolled down, the rumble of "ÁSi Se Puede!" accompanied by the thundering of drums could be heard from blocks away as Perez looked for a spot to park and join the march. "I think it's a positive step in the right direction," she said, adding that she wishes the public would get riled up about other issues, such as the war in Iraq and the fact that Exxon Mobil Corp. recently reported an $8.4-billion profit for the first quarter of 2006, while motorists are shelling out record amounts of money at the pump. "I think it's an opportunity," she said.