Putting a Lid on Leininger 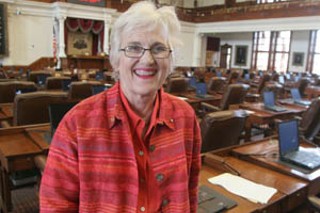 There is no time like the present to put a lid on the campaign-spending sprees of megamillionaire James Leininger and other wealthy "owners" of the Texas Legislature, so a bipartisan group of lawmakers wants to add campaign-finance reform to the special-session agenda.

The legislators know there's no chance that Gov. Rick Perry will add campaign spending limits to the to-do list, even if lawmakers are able to pass a tax bill before the clock runs down on the 30-day session that began April 17. Still, more than a dozen Republican and Democratic legislators have endorsed a bill filed last Thursday that would place a $100,000 cap on the amount an individual can give to state campaigns during a two-year election cycle.

"This is a modest first step," said Rep. Mark Strama, D-Austin, who co-authored HB 110 with Rep. Mike Villarreal, D-San Antonio. The two filed a similar bill in 2005, without success. "As redistricting has created more and more polarized districts, Republicans and Democrats alike are at risk of a single donor who chooses to spend a million dollars targeting one candidate," Strama said.

The donor in this instance is Leininger, an ultraconservative San Antonio businessman who dropped more than $2 million in the March primary races with a goal of ousting a handful of Republican legislators who helped kill a public school-voucher bill that he lobbied for in the 2005 session. Strama also has voiced concern about the prospect of Leininger opening his checkbook to his own District 50 Republican opponent, Jeff Fleece, in November.

In the primary, Leininger succeeded in just two out of five races, but his bankrolling provided the impetus for the proposed campaign-finance legislation. "This comes on the heels of some awful primary elections where some outstanding members of the House were having to face millions of dollars poured into their opponents' coffers from one or two individuals," said Villarreal.

Last week, three of the targeted lawmakers – New Braunfels Rep. Carter Casteel (who lost), Lubbock Rep. Delwin Jones and Longview Rep. Tommy Merritt (who both won) – were among several lawmakers and reform advocates who joined the press conference to support adding the bill to the governor's special-session call. In addition to Strama, Austin Democratic Reps. Elliott Naishtat and Donna Howard spoke in favor of the legislation.

Casteel, whose vocal opposition to school vouchers during the 2005 debate made her an instant darling of teachers' groups and lefty Capitol bloggers, talked about being a target of Leininger's money. "I don't know whether to be complimented or offended to be known as the 'Million Dollar Baby,'" she said of her primary loss to Leininger-financed Nathan Macias. "One of the things that money can buy can be lies. As a former educator, it causes me great concern that children growing up think that you may lie and slander and libel another person so that you can be victorious in a campaign."

Texas is one of 13 states without spending caps on individual campaign donations, which allows deep-pocketed "shareholders" in the Lege and other statewide offices to have virtual free-for-alls during election cycles. Craig McDonald, executive director of Texans for Public Justice, points to the 87 donors who contributed more than $100,000 apiece in the 2004 cycle as just one reason the state needs to reassert its commitment to the democratic process.

While Leininger may believe his investments in pro-voucher candidates will ultimately benefit poor kids stuck in failing public schools, his dominance in political campaigns has GOP and Democratic lawmakers "shaking in their boots," said McDonald. "The buzz going around since the primary is, 'Gee, I could cast one wrong vote and I could be next,'" he said. "The members are more sensitive to that threat – probably more sensitive than the leadership."

For that reason, McDonald believes the spending-cap legislation has a better chance of moving forward in next year's regular session than in the ongoing special session in which the governor sets the agenda. "Right now I think the chances are very slim because these are Perry's friends who are engaging in these practices," said McDonald, referring to Leininger, Houston homebuilder Bob Perry (no relation), and other large donors. "I think it has a much better chance for discussion and debate, and perhaps even passage, in the regular session, because it will be driven by the members who can move it along."