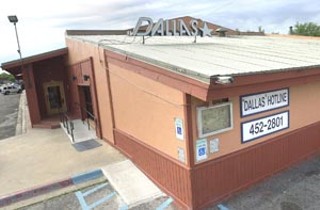 Dallas Nightclub has been heavily targeted in the TABC crackdown. (Photo By John Anderson)

It's been a tough couple of weeks for the folks at the Texas Alcoholic Beverage Commission, as the agency's nearly 5-year-old Sales to Intoxicated Persons (or, niftily, SIP) enforcement program has come under increasing fire from bar and restaurant owners, state convention and tourism officials, and, most recently, state lawmakers. Indeed, in advance of an April 17 joint legislative hearing – presided over by Sen. John Whitmire, D-Houston, and Rep. Kino Flores, D-Palmview – TABC Administrator Alan Steen announced on April 12 that the agency would "delay" any further SIP enforcement operations. The SIP program (created in 2001 but only fully staffed since legislators provided additional funding for the program last year) was designed as a way to attack Texas' drunk driving problem – the state consistently leads the nation in the number of drunk-driving fatalities and alcohol-related accidents – by ferreting out drunks before they ever get behind the wheel. As such, TABC agents, working with local law enforcers, have conducted a number of undercover stings, in part by infiltrating various watering holes to identify and, in many cases, arrest allegedly intoxicated patrons, and citing and/or arresting bartenders seen serving those TABC-defined drunks – that is, folks exhibiting a host of behaviors like stumbling, slurring, or being loud and boisterous.

While TABC's aim is noble, in practice the SIP program has become a public relations nightmare, highlighted by media reports of unsuspecting bar patrons being tapped by TABC agents and arrested for public intoxication – regardless of how much they say they've had to drink (and, reportedly, in a number of cases, without the benefit of any sobriety tests) and regardless of whether the patron had a designated driver or another means of transportation. Indeed, the case of a woman nabbed in a SIP sting and arrested in the bar of the Clarion hotel in Irving where she was staying made national headlines.

At the heart of the controversy are the various legal definitions of "intoxicated," – specifically, within the state's Penal Code and within the Texas Alcoholic Beverage Code – and, more narrowly, which definition TABC agents are using to make SIP arrests. In Austin, the controversy has focused on the Dallas Nightclub, whose owners filed suit against the agency in federal court on April 13, alleging that the TABC has violated due process rights through undue enforcement designed to put the company out of business. Last year, according to the lawsuit, TABC latched onto APD statistics showing that most individuals pulled over by police on suspicion of DWI reported consuming their last beverage at Dallas (the TABC did not take into account that with an 885-person capacity, Dallas is one of the area's largest clubs, reads the suit, and that "percentage-wise" other clubs have a higher incidence of DWI-arrested patrons). Since then, Dallas' owners argue, the agency has been on a harassment campaign targeting the club and its Wednesday night 69-cent drink special, which TABC claims leads to excessive drinking. While patrons arrested during SIP stings were charged with PI – in part, defined as intoxicated to the degree that a person is a danger to themselves or others – the ABC does not define "intoxication" at all, Dallas owners argue, thus making it so "no one, including a server, an establishment, a TABC agent, or even a Court can determine which definition of intoxication should be used." TABC's position weathered another blow April 21, when the judge presiding over the agency's bid to revoke Dallas' liquor permits opined that the agency failed to prove that Dallas bartenders had knowingly served alcohol to drunk patrons, or that the 69-cent special was designed to induce excessive consumption. In her ruling, which recommends Dallas be allowed to keep its permits, Judge Sharon Cloninger wrote that there was simply "insufficient evidence" to prove the TABC allegations.