Hey, all you Maroonies out there! I'm doing great! The cheerleading camp is kicking behind!

But enough about me! This is a sad letter. It is one of those times when all us Maroon alum need to come together and fight, fight, fight. A fellow Maroon needs our help!!

Lil' Scotty McClellan, that lovable wedgie boy from remedial English 101, is looking for a job. And he really, really needs our help. And it's going to take more than a few good prayers and Hail Marys to get this one on the Lord's to-do list, if you know what I mean! (Ha! Ha! Just a little joke! We all know that the Lord is Scotty's co-pilot ever since he kicked patootie in that fencing club exhibition! Go Scotty!!)

Now, I know what you're thinking. Why doesn't he just call up Mom? That always worked swell in the past! And, as you may have heard on the radio, his Mom – Carole Keeton Strayhorn – is actually running for governor! As in governor of the whole state! Isn't that great!?

But Scotty's brother is already running Mommy's campaign, and it turns out Scotty has what they call "baggage."

Believe it or not, Scotty was the press secretary to the president of the United States (really, I'm not joshing you!). Any-whooo … long story short … a lot of people … especially those icky liberal media creeps … are calling Scotty a lot of mean names, like "liar" and "dummy."

Nothing is definite, but it's possible that Mom may not want to spend the next few months talking about White House criminal indictments. Go figure?

(Hey, by the way, did you hear Scotty got married? Yeah, so I guess we were all wrong about that boy, if y'all know what I mean! Ha! Ha!)

Soooo …. Scotty is kind of in a bind.

Normally he could maybe get a job in public relations, what with all that work as a press secretary. And how hard a job could that be? So I called a friend of mine at a public relations company, and it turns out they have an assistant associate media specialist position open. Right on!

But she said there are a lot of cute, young girls applying for the job who are really, really good at talking onstage and, well, as we all remember from that sophomore year assembly, public talking ain't exactly Scotty's strong point. (Can you believe he had to check his notes when Principal Tithers asked him his name?! That was soooooo funny!!!)

It also turns out that – and let's just lay all those cards on that ol' table – ol' Scotty has a few holes in his résumé. For one, before that White House job, he'd really only worked for relatives, and we all know that doesn't look good. You'd also think he knows all sorts of cool media types, but his only reference is a guy named Jeff Gannon, who nobody has ever heard of! And I just found out that Scotty can't even type! (And he called himself a secretary!)

I've been working real hard, putting on that ol' thinking cap, trying to help out Scotty. But it's been real, real hard. There are not that many jobs out there for a guy who lists "great dissembler" on his résumé. (And what the heck does that even mean????)

I was thinking maybe he could be that guy in those credit card commercials who always says no to everybody – he'd be great!! – but I called and they said that's just a made-up job.

Then I was thinking maybe fast food! He'd be a swell assistant manager at Burger King! He kinda looks like one, right!? But then I thought about it real hard, and I realized that Scotty may not be management material because we all know that nobody likes a company suck-up. So I started seeing all this crazy stuff going on, like the french-fry guy starting riots and the burger-flipper guy doing really bad things to Scott behind the trash bin.

And, well, we all know you couldn't put Scotty on the register. Can you imagine!? Some guy would come in to order a taco and Scotty would probably go off on him with the ol', "I have no information to that effect and would like to reiterate that Burger King is dedicated to focusing on the needs of the American people." Ha! Ha!

Remember the way he used to talk? The gym teacher asked him if he washed his shorts, and Scotty said, "I'm not the shorts-cleaner. Nor am I an expert in shorts-cleaning. Perhaps you would be better off directing that question to a shorts-cleaner."

Dudes, Scotty needs your help. Remember how funny he was with his Three Stooges impersonation?

Any ideas would be deeply appreciated. Chip in any way you can. Anything will help… really, anything. Maybe you need a lawn mown? Or maybe you need somebody to answer the phone? Really, fellow alum, we need to think outside of the box here. 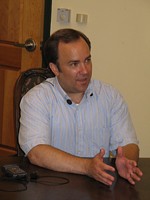 Who Did He Serve?
Scott McClellan on Bush, bipartisanship, loyalty, and duty