Are the Waters Rising at Bouldin Creek? 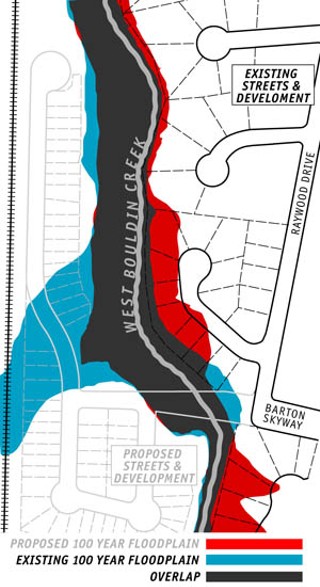 Out of the Floodplain(blue): Under FEMA’s proposed new map, a large swath of the proposed 14-acre Bouldin Meadows subdivision would no longer be in Bouldin Creek’s 100-year floodplain.
Into the Floodplain(red): But across the creek, a number of existing houses would find themselves in the flood­ plain when they haven’t been until now.

Poor FEMA – it's having one heckuva year.

Three years ago, the Federal Emergency Management Agency began work on new floodplain maps for Austin. Costing some $3 million to the feds, and $1 million to the city, the maps were released last month, initiating a 90-day comment and review period before adoption. The maps show the Hill Country's estimated 100-year flood plains, those lands in the city and Travis Co. expected to flood in the face of a catastrophic downpour – the kind anticipated only every 100 years or so. George Oswald, manager of the Watershed Engineering Division with the city's Watershed Protection and Review department, says the existing maps don't accurately delineate the current floodplain. He says those maps, last revised in the Eighties, relied on older land-use patterns, modeling, and topiary information. They're "all now updated," he continued, noting the specific attention paid to lots along Bouldin Creek in south central Austin. "The new maps are quite different in this area," he said.

Chuck Mains knows. The backyard of his home on Birdwood Circle saddles up directly against Bouldin Creek, making for an idyllic view and incessant mosquitoes. Yet the little bloodsuckers are suddenly the least of his worries – despite the absence of a flooding history in his sleepy neighborhood, according to FEMA's new maps, his home is now flush in the 100-year floodplain. Yet it's not necessarily his home's inclusion in the map that worries him – instead, it's a 61-lot, 14-acre development planned for construction across the creek in what's currently the floodplain area, but will be no longer in FEMA's new maps. 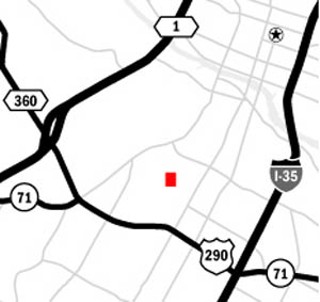 The proposed Bouldin Meadows development would run between West Bouldin Creek and the Union Pacific Railroad line, parallel to nearby Manchaca Road. The land, according to Mains, now serves as "wash area" during heavy rains, dissipating and absorbing water before it enters the creek. "People living here since 1963 say they've never been flooded," Mains says. He's concerned that Bouldin Meadows would bring that to an end, making his and his neighbors' new designation in the floodplain a fait accompli. In the current map, his neighbors' backyards on the east side of Birdwood Circle edge into the floodplain; in the new map, the homes are completely covered.

Aside from the increased impervious cover sending more runoff directly into the creek, Mains also points to drainage from the Union Pacific rail line as a direct threat. The railway, which currently serves as a berm between the undeveloped land and the South Lamar neighborhood, has two culverts at Lightsey Road that drain and move water during flooding. The water falls into what Mains calls a "plunge pool," dropping five feet where it can further fan out. He's worried that the Bouldin Meadows development will abandon the plunge pool to extend the drainage tunnel some 150 feet, creating what he calls "a gun pointed straight at me." He has recently been joined in his concerns by members of the Galindo Elementary Neighborhood Association and the South Lamar Neighborhood Association.

When the Bouldin Meadows preliminary plan came before the Zoning and Platting Commission April 4, Mains took his concerns there. The discussion quickly turned to the drainage area between the creek and the railway ridgeline, the standard on which an approval decision will likely hinge. Oswald, speaking in favor of the plan, emphasized that the area constitutes approximately 55 acres of drainage into the creek; 64 acres of tributary drainage is the threshold required for land to be considered a "critical water quality zone," effectively the city's definition of a floodplain. Contacted later, Oswald was surprised by the controversy. "The contention by neighborhood interests is that the city was allowing homes in harm's way," which is nonsense, he said. "As far as putting people at risk because of a flood hazard ... it would have to be a 100-year flood." A representative of the site owner also spoke to assuage drainage fears, along with the development's engineer.

In his time before the committee, Mains reminded members of a second culvert along the Union Pacific line, over a football field's length north of the culverts at Lightsey Road; when accounted for, the rail line culvert could raise drainage acreage to more than the critical 64 acres. "What we're afraid of, [we] neighbors along the street," Mains said, "is that the water converted together is actually going to come out at full force." To drive his point home, Mains brought photos of the land covered in water, following only a one-inch rainfall. Declared one board member: "It looks like a marsh there."

ZAP ultimately delayed a vote on the plan, postponing it until the commission's May 2 meeting. In the meantime, utilizing the networking and glad-handing he relies upon as a legislative aide, Mains has taken his case to whoever will listen. Council Member Lee Leffingwell recently toured the area, as did members of ZAP and the Environment Board. As the Chronicle went to press, the Environmental Board was reviewing Bouldin Meadows' drainage at a Wednesday meeting. The consensus seems to be that a rejection from board members would give ZAP greater standing on which to reject the Bouldin Meadows proposal; at its previous meeting, a vote to deny the plan received a second before it was tabled.

One, Two, Many Floods?

Regardless of the Environmental Board and ZAP's decision, the controversy surrounding changes to the 100-year floodplain could signal trouble as Austin comes to terms with its urban creeks. If the challenge is successful, it means not only a local black eye for FEMA – not a name associated with quality – but for the city's watershed department as well. Flash Flood Alley needs neither as it continues its unabated growth. With another month of public comment left before the maps are scheduled for adoption, however, what looks like another neighborhood skirmish could actually be the opening of the floodgates.

For more info on the proposed floodplain maps, visit the city's Web site at www.ci.austin.tx.us/watershed/floodplain_newmap.htm. The maps are available for viewing there as a pdf and in an interactive map viewer. Hard copies are also available at the Watershed Protection and Development Review Department Development Assistance Center, first floor, One Texas Center, 505 Barton Springs Rd., and elsewhere around town.