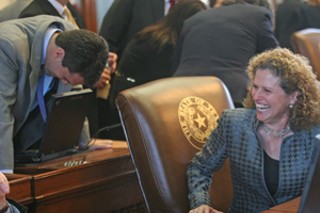 Comptroller Carole Keeton Strayhorn, who hopes to unseat Perry in November with her independent bid for governor, delivered her revised revenue estimate for the 2006-07 biennium right about the time Perry was scheduled to address a friendly rally organized by the Texas Association of Realtors. The realtors group is one of a couple dozen business organizations that have endorsed Perry's tax overhaul plan, which would slash school property taxes by $6 billion a year and pay for the cut with an expanded business tax, higher cigarette taxes, and about $1 billion from the state surplus. A blue-ribbon committee headed by former Comptroller John Sharp crafted the plan, under Perry's charge, as the answer to the state Supreme Court's mandate to lawmakers to come up with a new school-funding method by June 1.

Legislators, either in deference to Sharp, a Democrat, or Perry, a Republican, have been reluctant to completely lambaste a plan that carries a constituent-friendly property tax cut. But many Dems fault the plan for failing to provide new money for schools and teacher pay raises, while fiscal conservatives don't particularly want their fingerprints on a tax proposal of any sort, preferring instead to buy down property taxes with the extra money in the state coffers.

Monday's surplus announcement wasn't unexpected, but no one anticipated the state would end up sitting on an extra $8.2 billion – up from a $4.3 billion estimate in February. The nearly doubled pot of undedicated money changes the playing field dramatically, with pro-school lawmakers stepping up demands to invest more state money in education and conservative Republicans across the state ramping up a petition drive to try to defeat any plan that calls for new taxes. Perry, for his part, greeted the surplus by suggesting that an even larger property tax cut is in order. Not to be outdone, Strayhorn laid out some proposals of her own on Monday, calling for a $4,000 across-the-board pay raise for teachers and the full restoration of funds to the Children's Health Insurance Fund. She urged Perry to expand the session's agenda to include these proposals and more. She also couldn't resist taking a swipe at Perry's two "slush funds" – business incentive programs designed to beef up the Texas economy.

"We need to end the governor's taxpayer-funded corporate-welfare slush funds – the Texas Enterprise Fund and the Emerging Technology Fund," the comptroller said, adding that the $300 million in the two funds would be better spent on reducing property taxes and paying for education and health care needs.

In other sideshow developments Monday:

• House Speaker Tom Craddick turned the floor over to Sharp, who fielded questions from House members, including an extensive and somewhat argumentative line of questioning from Rep. Craig Eiland, D-Galveston, who suggested that his constituents would never see their school property tax rate drop to $1, as the plan proposes. After several minutes of back-and-forth, Sharp had had enough. "Mr. Eiland, I can explain it to you, but I can't understand it for you." "And I can explain it to you," Eiland replied, "and you can't understand it." Sharp winked and chuckled. "But I still love you," he said.

• Incumbent Lt. Gov. David Dewhurst called the Senate to order with a forceful thwack of the gavel, causing it to break. "I hope that's no reflection on this session," he said.

• Here's a whimsical idea – why not provide Texans with "real-time" access to every aspect of the special legislative session on school finance? House Democratic leaders last week proposed amending the House rules at the start of the session, which opened Monday, to promote transparency and ethical leadership throughout the 30-day process. Introduced by Democratic Reps. Jim Dunnam of Waco, Garnet Coleman of Houston, and Pete Gallego of Alpine, the Open the People's House Reform Plan lays out an eight-point proposal that would require, among other things, real-time Internet access to record votes and floor amendments; conference committees to meet and vote in public; and the House to abide by the same open-meetings laws required of all other state agencies. The plan also calls for the speaker to restore the rule to replace committee chairs who lose their primary re-election bids – notably Education Committee Chair Kent Grusendorf. In their letter to House members last week, Dunnam, Coleman, and Gallego wrote: "With the daily drumbeat of official and media reports of special interest lobbying, sweetheart deals and backroom meetings, it's more important now than ever that Texans have full and complete info about our work on school finance and property taxes." – A.S.

• In other state Lege news, Gov. Rick Perry may have set a narrow agenda for the special session, but that hasn't stopped lawmakers from filing all sorts of garden variety bills and resolutions. After all, Perry did say he'd expand the call if – and that's a big if – legislators can deliver a tax bill to his desk before their 30 days are up. Meanwhile, the leadership in the House, which is where tax bills originate, has broken down the Perry tax proposal into five easy pieces (HBs 1-5) to help expedite the process. On the Senate side, Education Committee Chair Florence Shapiro, R-Plano, has filed SB 1, which would, among other things, hand teachers their first pay raise in seven years; her committee began holding hearings on the bill this morning (Thursday). Beyond the scope of school finance, Rep. Sylvester Turner, D-Houston, said he'll file legislation that would ease the pain of high electric bills for low-income-rate payers. One of Turner's goals is to restore the state's System Benefit Fund, which provides discounts to poor Texans through a surcharge on electric bills. Also, Sen. Robert Duncan, R-Lubbock, has filed legislation that would outlaw the disruption of funerals. The bill is specifically aimed at old farts like Fred Phelps and his hate-mongering congregation of Westboro Baptist Church in Topeka, Kan. The church has held a number of anti-gay protests at the funerals of U.S. soldiers. Among an assortment of well-meaning, yet meaningless, House resolutions, the one filed in honor of Karl Rove is especially rich. This one comes courtesy of Rep. Tony Goolsby, R-Dallas, who drew on the occasion of Rove's roast back in January to honor him for his "invaluable contribution to the leadership and vision of the Bush administration" and for the "pivotal role he has played in shaping U.S. politics and policies at the opening of the 21st Century." – A.S.

• Also in tax plan news, the Texas Medical Association – a key holdout in supporting the Perry-Sharp tax plan – agreed Wednesday to endorse the proposal after locking in a deal that would allow health-care providers to make tax deductions for charitable care. With that, Gov. Rick Perry announced Wednesday that the TMA and 18 other health care associations are now on board with the proposed business tax. The groups represent midwives, hospitals, pharmacists, optometrists, nurses, and other providers. – A.S.

• After serving 33 years in the Legislature, Sen. Frank Madla, D-San Antonio, will call it quits May 31. His surprise announcement comes just six weeks after losing a nasty Democratic primary race to San Antonio Rep. Carlos Uresti. Gov. Rick Perry is not expected to call a special election to fill the vacancy; the governor's office says Perry doesn't anticipate another special session to follow the 30-day session that convened Monday. Then again, that was Perry's explanation for not calling a special election to replace Houston Democratic Rep. Joe Moreno, who died in a car wreck before the end of the 2005 regular session. Two special sessions followed, and Moreno's District 143 seat remained empty. In any case, Madla cited his family as the main reason for his early departure; he says he has not made any post-Lege career plans. Many Democratic lawmakers thought Madla was too cozy with the Republican leadership, and his votes on critical issues bear out that sentiment. In fact, Lt. Gov. David Dewhurst, a Republican, campaigned for Madla during the primary, which no doubt contributed to his defeat. "Sen. Madla's wisdom, integrity, and sincerity will be greatly missed when he steps down from the Texas Senate," Dewhurst said in a statement. – A.S. 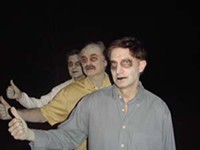