The nation's most prominent anti-war protester, Cindy Sheehan, spoke on the University of Texas campus on Monday. Behind Sheehan is Carlos Arrendas, holding a photo of his son Juan Arrendas. Like Sheehan, Carlos Arrendas lost his son in the Iraq war. (Photo By Jana Birchum)

As we all know, unless some of us have willed ourselves to forget, the war in Iraq is still very much happening. An update: The U.S. military body count is at 2,376, and though the fallen bodies of the resistance are not tallied, we know that the Iraqi civilian body count, as reported in the media, is at 36,841. And now, with the late addition of Wesley Clark, seven retired generals are calling for Secretary of Defense Donald Rumsfeld's resignation, marking a severe change in military support. On top of that, a solid majority of the U.S. population (several major polls show 55-60%) no longer supports the war; yet, that majority isn't hitting the streets and demanding the war's end. 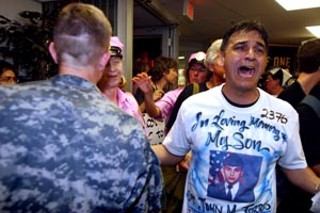 That's the thing about the phenomenon that is Cindy Sheehan: She's exceptional. Not because she has done anything extraordinary, as she herself is the first to admit, but because of precisely the opposite. Just over two years ago, on April 4, 2004, eight American soldiers were killed in Sadr City. Two of them were Mike Mitchell and Casey Sheehan. Upon news of Mike's death, his sister sent out an e-mail to the families of the other seven soldiers. Cindy Sheehan was the only one who responded. While consoling each other on their mutual loss, she and Bill, Mike's father, found that they both felt the same way about the war that had cost them the lives of their sons: It is illegal and immoral, and it needs to be stopped. So Gold Star Families for Peace, a driving force behind Camp Casey, the famous anti-war protest held outside of Bush's ranch in Crawford two summers ago, was born.

So when – after a weeklong resuscitation of Camp Casey – Bill, Cindy, and other members of GSFP came to Austin to participate in the Campus Anti-War Movement to End the Occupation, organized by People Changing Policy Forum, their advice was not surprising: Get up off your ass and do something. They spent the day at an anti-recruitment action at UT, engaging counterprotesters in the blazing sun of the East Mall who were carrying signs such as "Stop dishonoring your son" and "Recruiters keep the military voluntary." Then they marched to the recruiting office at the Dobie Mall, chanting "War and occupation do not bring liberation" and "That's bullshit! Get off it! This war is for profit." There, they descended upon the recruiters (who were literally on top of their desks ordering everyone out) to ask them via a bullhorn – so that the 50-odd supporters pouring out of the tiny office could hear – to please be honest about the repercussions of war with new recruits and not to lie to them as Casey's recruiter had to him.

The participants in the evening's panel, however, were not simply rowdy sign-wavers or sentimentalists who just wish the world would rotate on an axis of love; they were smart people who knew their audience. "People say that we are preaching to the choir, but the choir isn't singing," explained Sheehan to the 30-odd folks in attendance. "Forget about that 30% who still support Bush. We're never going to get through to them. It's the 70% who know that this war is wrong, who know Bush is a liar, and who are not here. That's who we need to be reaching out to."

Also on the panel was Ann Wright, former deputy chief of mission at the U.S. Embassy in Mongolia. Wright resigned over the handling of the invasion and had direct instructions for those with the time and the inclination to get into the streets. "Go to the power centers," she explained. "April 29 in NYC and Mother's Day in DC will be giant if everyone participates. So save your Greyhound bus tickets and get yourself to NYC."