Okay, Maybe Crime Does Pay The appointed leadership of the Texas Commission on Environmental Quality, the state's environmental agency, isn't quite sure if it's OK that companies are profiting by breaking state pollution laws. That's the implication of the current impasse over the most controversial aspect of the two-year-long, ongoing update to the agency's penalty policy: the recovery of economic benefit from unlawful polluters. With the recent retirement of Commissioner Ralph Marquez, the two remaining commissioners weren't able to agree on policy reforms at their March 29 meeting. Commissioner Larry Soward, with the backing of TCEQ Executive Director Glenn Shankle (and more than 500 public comments) favored recovery of all realized economic benefit of violations, but Commission Chair Kathleen Hartnett White wished to leave the policy essentially as is. The new commissioner, to be appointed by Gov. Perry, could very well break the tie. Environmental groups are pushing hard for a fair-handed appointment and for the commission to add teeth to a set of rules that they say now barely gums on even the most severe polluters.

In 2003, the state auditor reported that polluters were making eight times as much by violating the law as the penalty assessed by the TCEQ cost them, finding that the agency "does not consistently hold violators accountable" and criticizing the timeliness of enforcement and effectiveness of the monetary penalty tactics. That same year, an EPA review of TCEQ enforcement included this recommendation: "collect at least the economic benefit of noncompliance for the actual period of the noncompliance to make it economically impractical to violate permit requirements." While the two reports helped spur the current reforms, a new report titled "Troubled Waters: An analysis of Clean Water Act compliance," released in March by the nonprofit Environment Texas, chides the agency further. It found that 58% of the state's factories and utilities exceeded the amount of pollution allowed under their Clean Water Act permits more than 2,000 times over an 18-month period in 2003 and 2004, with 115 of the violations exceeding water pollution limits by 500% or more.

John Sadlier, the agency's enforcement director, said the 2,000 violations cited by the report were out of 43,200 required reports, resulting in a violation rate of less than 5%. As for the inadequacies referenced in the 2003 state and federal reports, Sadlier said "all of that has changed. We do more and more enforcement every year." The agency is on track to exceed the 1,159 violation orders issued last year, he said. Asked whether more orders necessarily equal improved compliance, Sadlier said he estimated that most penalties assessed now are paid in full even before they're presented to the commission for review, and that his enforcement division reports an approximate 97% rate of compliance. With the benefit of more information in subsequent talks, he said, "I'm certain [the commissioners] will eventually reach agreement."

Environment Texas advocate Luke Metzger called on the commissioners to "eliminate the perverse incentive to pollute in the penalty policy" by abolishing a $15,000 economic benefit threshold below which violations aren't even pursued, and to require recovering the full economic benefit of permit violations. He questioned Sadlier's compliance stats, which he said even Soward was publicly cautious of. He said complicated figures shouldn't cloud the facts. "The rate of violation is still way too high, and this level of lawlessness shouldn't be tolerated," Metzger said. "The proof is in the pudding, a third of the state's waterways aren't safe for fishing or swimming, and two-thirds of us live in places where it's not safe to breathe the air on certain days." He said he's encouraged by the progress of Sadlier's division and the appearance that staff may want to do the right thing but that their hands are tied by bad policy at the commission level. 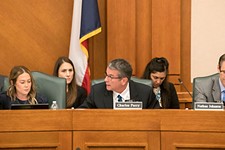 Subsidizing Smog
A new report from the Sierra Club shows that while new roads may get traffic moving, air quality will continue to suffer.