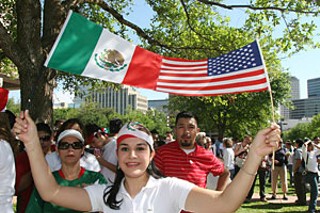 An estimated 10,000-12,000 marchers crowded the streets of Austin Monday to protest proposals pending in Congress to tighten restrictions on illegal immigrants. The attempts at legislation, all of which have stalled out thus far, have been described as "draconian" by immigrant rights advocates. See p.26. (Photo By Jana Birchum)