Is BCP Still for the Birds? 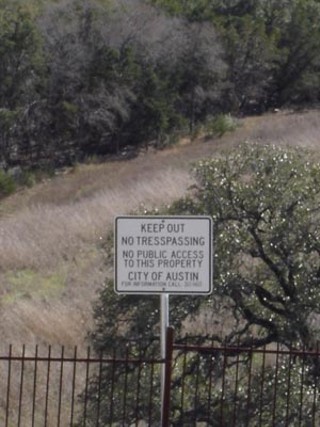 Ongoing disagreement over the appropriate balance between public access and endangered species protection on the Balcones Canyonlands Preserve, a 28,000-acre hodgepodge of protected land in Western Travis Co., is coming to a head as the preserve's management plan enters the final stages of its five-year review. While some clamor for more recreational access – something they say was assured by language in the $22 million bond package voters approved in 1992 to buy the lands – prominent environmentalists have joined BCP managers and scientists in insisting that the protection of the preserve's endangered songbirds and cave bugs – directly threatened by the area's turbo-charged tract-home development – is the preserve's sole priority.

BCP is operated under a U.S. Fish and Wildlife Service Endangered Species Act permit, which stipulates that the preserve's uses must not harm or harass its endangered species inhabitants or the quality of their habitat. Eight popular public areas, including the Barton and Bull Creek greenbelts, as well as St. Edwards and Emma Long parks, were grandfathered as designated public parkland when they were absorbed into the preserve in 1998. The welfare of the Golden-cheeked Warbler – said to have trouble nesting except in deep, peaceful woods, which are few and far between in the fragmented BCP – dictates how the balance of the preserve's acreage is managed. The newly drafted management plan contains many provisions for limiting and eliminating access in Warbler-sensitive areas. However, of the more than 200 comments received during a 120-day public comment period for the updated plan, which concluded March 10, the lion's share requested more access, according to BCP Land Manager Willie Conrad, while only a few cited species protection as their priority.

BCP's coordinating committee met March 22 to solidify the management plan draft (available at www.bcpcac.org), and on Monday, April 3 for further discussion and to finalize the citizen comment recommendations. BCP staff will prepare responses to the citizen comments and Citizen Advisory Committee recommendations. The full BCP coordinating committee is expected to consider the outcome in June and finalize a management plan draft, which will go to committee voting members Mayor Will Wynn and County Commissioner Gerald Daugherty for final approval.

On a half-day windshield tour of the preserve last month with Richard Viktorin, a retired state economic developer and auditor-turned-parks advocate, the Forest Ridge trail was our first stop. Viktorin spoke out last year when he felt his trail-running group was unjustly targeted by a "no more than three runners at a time" rule enacted at Forest Ridge, the group's destination of choice. Similar restrictions remain there, and access is limited March through July to those who have taken a habitat education course. Viktorin criticized BCP management for giving users inadequate notice of the management plan review. Echoing his sentiments from last year, he contends that BCP managers are "still unwilling to facilitate or expand public access," which he says has more to do with money than species preservation.

Closures at places such as the former Greenbelt trailhead across from Rudy's BBQ on Loop 360 have Viktorin accusing managers of "clear malfeasance," as do recent dog prohibitions at the popular leash-free Turkey Creek dog park. In an e-mail, he went so far as to suggest that "scientists and developers are trysting at the BCP," with biologists hoarding preserve resources for their discipline. He also suggested that developers are pushing for funds to be devoted to completing the BCP, so their requirement to purchase mitigation lands, now mandated under the Endangered Species Act for development in the sensitive area, will disappear. Viktorin believes some developers with large land holdings are sitting on plans for this reason.

The newer, existing developments we passed through on the tour – like the neighborhood surrounding the now-closed Canyon Vista trailhead, West of Loop 360 near Spicewood Springs Road – were quintessential sprawl, complete with monolithic McMansions and land use patterns à la Plano. Viktorin noted that the neighborhoods' overabundance of runoff-prone pavement and carpet grass is "incompatible with the land's natural cleansing features," suggesting, like many, that this kind of development, not passive public access, is the Warbler's worst enemy.

In a phone interview, BCP Manager Conrad said, "we'd like to get more people on the lands to learn about the preserve." However, referring to areas facing restrictions, such as Turkey Creek, he said "we feel like Austin's population is blossoming, and heavy trail use has led to soil erosion and changes in water quality and plant cover." Sticking by his guns, he emphasized that "the primary guideline under our permit is to protect the species" and to "err on the side of caution." Asked if there's been documented harm to the BCP's species, Conrad said "no," but if there had been, "we would've already failed our mission." Once BCP reaches its size goal of 30,428 acres, Conrad said he suspects more mitigation land will be sought based on both species and area development. He blamed access struggles at places like Canyon Vista and Forest Ridge on past unregulated public use under private ownership before the areas were added to the preserve in the late 1990s.

Lately, the appearance of signs prohibiting dogs at the no-leash-designated Turkey Creek Park, within the Emma Long Metropolitan Park, has raised many an eyebrow. Electing to enforce a measure in the 1999 BCP management plan, Conrad said the dog ban postings were based on two citizen complaints, though no enforcement action has been taken. Speaking for the Friends of Turkey Creek group, dog-walker Sheila Holbrook-White said dog access was guaranteed by a 1980s city council ordinance establishing leash-free areas and later reinforced by a 1994 PARD resolution reaffirming the council policy – both of which supersede the '99 rule, she says. To her, the purported dog danger to the preserve "sounds like a slippery slope to close the entire park."

Former Austin Sierra Club Chair Karen Ascot conceded that temporary closures may be what are needed to sort out the true threats to BCP's habitat and that its protection should be the priority. "I and tens of thousands of other Austinites want to see plenty of open space for public recreation, and we should all be working consistently toward that end," Ascot said. But "this requires addressing out-of-control, automobile-dependent sprawl development that's eating up open space at a rate far higher than the rate of population growth. At the same time, it is extremely important to be sure there are a few places left where the endangered species, specifically the Warblers, have sanctuary." More research is in order, she says, especially with respect to Turkey Creek. If urbanization, fragmentation, and development are causing the habitat degradation rather than dogs, said Ascot, "then prohibiting dogs would be barking up the wrong tree, as it were." 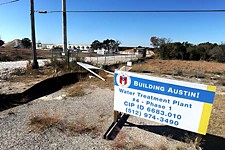 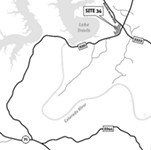 WTP 4: Home for the Holidays
Road to decades-delayed Water Treatment Plant No. 4 may be coming to amicable end