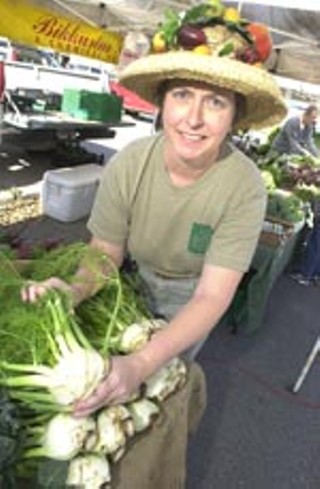 What does the war in Iraq have to do with tomatoes and the Red-Headed Stranger? No, this isn't a bad back-of-a-cereal-box riddle. The answer is Farm Aid. Twenty years ago, Willie Nelson started the musical benefit as a way to generate support for American farmers. As Nelson puts it in the introductory quote to Farm Aid: A Song for America, a new coffeetable book compilation of photos and essays about Farm Aid and, among other things, the connections it fosters between music, food, and farmers in America: "We're fighting for the small family farmer, which means that we're fighting for every living American."

Unlike the Iraq war, painted by the Bush administration as a way to preserve freedoms and to protect the U.S. from a nation bent on harming it (read weapons of mass destruction and lame attempts to link Saddam Hussein to Osama bin Laden and 9/11), supporting U.S. family farmers actually helps accomplish those things. Here's how: According to a 2002 paper published by environmental advocacy group the Worldwatch Institute, corporate-dominated international trade in food "has grown nearly threefold since 1961. Countries shipped $417 billion worth of food and agricultural goods around the globe in 2000. As the value of agricultural trade has increased, so has the volume. Today, some 817 million tons of food are shipped around the planet each year – up fourfold from 200 million tons in 1961." The globalization of our food markets puts American farmers out of business because, as noted in the paper, titled "Home Grown: The Case for Local Food in a Global Market" (www.worldwatch.org/pubs/paper), an apple grower in a developing country like China can afford to sell his or her crop at a much lower price than a farmer from Iowa can. As Sonny Naegelin, a farmer from Lytle, south of San Antonio, who has a stand at the Austin Farmers' Market every Saturday, put it, "Now you got Mexico" to compete with. "They sell their stuff dirt cheap." As more U.S. farmers go out of business because they can't afford to live off their land, we become more dependent on foreign sources for food.

"Home Grown" also notes that produce cultivated within the U.S. is traveling between 1,550 and 2,480 miles from farms to get to markets where it is sold, a 20% increase during the past 20 years. Considering how much gas prices have surged since we invaded Iraq three years ago, and how little of the oil we consume comes from within the U.S., adjusting our food's current migration patterns is key to America being a self-sufficient, independent nation.

"We gotta have access to farmers, [and] farmers gotta have access to clients," said Suzanne Santos, farmers' market program director for Austin's Sustainable Food Center, one of 57 nonprofit organizations nationwide that got grant money from Farm Aid last year to support family farming. The center's two markets – one year-round downtown, 9am-1pm Saturdays at Republic Square Park at Fourth and Guadalupe (except for this week, when it is on Guadalupe between Second and Third) and the other on the Eastside at Plaza Saltillo on Thursdays, 4-7pm, from the end of April until the end of September – are for farmers within a 150-mile radius of Austin. (They sometimes make exceptions for farmers further away if they sell something that doesn't grow in our region, such as citrus.) "We just think local [food] is better," said Santos, because it's fresher and it generates more money for the community.

That's one of the main points Farm Aid: A Song for America aims to get across to readers. Editor Holly George-Warren, who had a lot of experience writing about music, but was new to the agricultural/good food movement side of the project, said working on the book "completely turned my head around about farming and the whole situation in the U.S. … It really politicized me as a consumer." And consumer politicization is one of the book's intentions, as concluding essay, "Onward! A Call to Action," by Farm Aid Executive Director Carolyn Mugar, makes quite clear.

"In a world so chopped into frantic moments, when we are pushed relentlessly by markets to purchase the most packaged, most convenient, most processed foods, it's great to sidestep all that. It can't be done all at once; it's an accumulation of many decisions over time. But simple acts can lead to groundswells of change. …

"In a democracy, we have political choices. It's not just who we vote for. It's determining who holds the power over our national resources and who controls the food and, if necessary, challenging those forces. Food and farming are too important to be left in the hands of a few corporations. Our government must mediate the common good so that all its citizens benefit. That challenge will take us a lifetime, and beyond – to make family farming the true basis of a fair economy and a democratic society."

Check out www.farmaid.org to learn more about Farm Aid, or www.sustainablefoodcenter.org for more on the Sustainable Food Center.