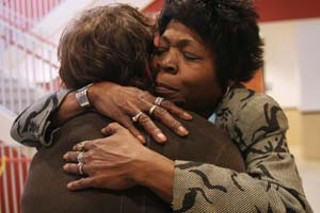 After a two-day evidentiary hearing in Bastrop last week, the question of whether Texas death row inmate Rodney Reed will get a second chance to prove he is innocent of the 1996 murder of Stacey Stites rests in the hands of Bastrop Co. District Judge Reva Towslee-Corbett. Reed's attorneys insist that exculpatory evidence unavailable to Reed during his 1998 trial – evidence they say was hidden from the defense by former Bastrop District Attorney Charles Penick and his prosecutorial team – casts serious doubt on Reed's guilt and strongly supports the defense theory that another man, Stites' former fiancé and then Giddings police officer Jimmy Fennell, Jr., was the real killer.

Reed was convicted in May 1998 of killing Stites, a 20-year-old Giddings resident, as she drove to work for an early morning shift at the Bastrop HEB on April 23, 1996. Stites was strangled with a belt and her body was dumped just north of town; the red pickup truck she was driving – which belonged to Fennell – was found in the Bastrop High School parking lot. DNA evidence on Stites body led investigators to Reed, but no other physical evidence connects Reed to the crime, and Reed accounts for his DNA by insisting that he'd been having an affair with Stites. Reed's supporters say Fennell, now a Georgetown police officer, is a far more likely suspect – he apparently knew of Reed and Stites' relationship and was not happy about it. Fennell was initially a suspect, but police never properly searched the apartment he shared with Stites, nor his pickup truck.

Reed's appeal attorneys, Morris Moon of the Texas Defender Service and former Court of Criminal Appeals Judge Morris Overstreet, contended that his trial attorneys were ineffective at least in part because DA Penick withheld exculpatory evidence, especially concerning Fennell. In October, the Court of Criminal Appeals sent Reed's case back to the Bastrop court to hear testimony related to the allegedly withheld information – including testimony from Martha Barnett, who said she saw Stites and Fennell in a convenience store parking lot around 5am the morning Stites was murdered, and from Dallas police officer Mary Blackwell, who said she had heard Fennell bragging during a police training class that he'd strangle his girlfriend as punishment for any infidelity.

Barnett told the court she knew Stites from the HEB, as she worked in the same shopping center, and that the morning Stites was killed, she saw Stites and a man, apparently arguing, standing next to a red pickup in the parking lot of a nearby convenience store. Weeks later, she recognized a newspaper photo of Fennell. Her mother suggested she tell former Lee Co. Attorney Steven Keng, and in January 1998, Barnett asked Keng to pass her story on to DA Penick. Keng testified that Penick wasn't interested. "His response was to laugh and to tell me he didn't need any more witnesses," Keng testified, "that he didn't want to hear it, and [he] turned on his heel and walked off."

Blackwell, a sergeant with Dallas' North Lake Community College police, told the court that in 1995, during a police academy class, she'd overheard Fennell "talking to another cadet, and he said that if he ever found out that his girlfriend was cheating on him that he'd strangle her," and would avoid leaving fingerprints by using a leather belt. In 1998, after Blackwell heard that Stites was in fact strangled with a belt, she told her story to private investigator John Vasquez, who was working on Reed's defense. But Vasquez passed the information on to Assistant District Attorney Forrest Sanderson, he testified, and not to the Reed defense – assuming that because the state was required to share mitigating and exculpatory evidence with Reed's lawyers, the information would make it to them. But that information was apparently never relayed. (Sanderson testified that Vasquez never gave him the information.)

Responding for the state, Assistant Attorneys General Lisa Tanner (who helped Penick prosecute Reed in 1998) and Tina Dettmer attacked the defense evidence. Tanner tried to undermine Barnett's photo identification of Fennell and suggested Barnett might have been motivated to lie in order to get back at Fennell, who'd arrested her in 1997 on a drunk driving charge. She also countered Blackwell's story with the testimony of AG investigator Missy Wolfe – over strenuous hearsay objections from Overstreet – who testified that she'd talked to each member of the 1995 police training class, but none recalled Fennell boasting about how he'd kill his girlfriend.

Now-retired DA Penick testified himself that Keng hadn't come to him with information about Barnett until 2002. "I thought he was kind of jesting. I didn't take him seriously," Penick said, although he agreed that he had told Keng that "I … had enough evidence to get Rodney Reed and that I didn't need any more." Penick's timeline is curious, since by 2002 the Barnett information was already public (including in the Chronicle), and Penick could not explain to Overstreet why, if he'd gotten the information four years after the trial, he would tell Keng he wasn't interested because he already had enough evidence. "I didn't say 'to prosecute,'" Penick replied, clarifying nothing. "I said I had 'enough evidence against Rodney Reed already.'" Penick insisted he'd done nothing wrong and as for Keng, he said, "He's telling a big lie."

Judge Reva Towslee-Corbett – whose father, former Judge Harold Towslee, presided over Reed's original trial (a circumstance that Reed's supporters say is a conflict of interest) – will now weigh the conflicting testimony and decide, probably by early summer, whether to recommend to the Court of Criminal Appeals that Reed receive a new trial.