Bo McCarver with the "Solar D" house that he hopes will share electricity with other East Austin residences. (Photo By John Anderson)

It was such a brilliant idea: Take one funny-lookin' solar-powered house efficient enough to generate excess electricity, hook it up to a less-efficient bungalow, and pass clean energy from house to house as easily as you could a cup of sugar. That was the idea Bo McCarver of the Blackland Community Development Corporation had for a pair of homes on Leona Street in East Austin. It was brilliant! At least, until he unveiled the idea to Austin Energy. That's when the hopes started to dim. "I'm satisfied that the folks down with Austin Energy are good people," said McCarver, "but we've got a strange law that will not let us move the energy here 15 feet to another low-income family."

Leona is in the Blackland neighborhood, just east of I-35 and just south of Manor Road. It's a historically African-American community that was the site of one of the first big gentrification fights in East Austin, when UT grabbed and demolished a block of homes to add to its facilities in the 1980s. McCarver's been fighting to preserve affordability ever since. The CDC now owns about half the single-family homes and duplexes in the neighborhood, which it rents (but, to prevent flipping, does not sell) to residents making up to 50% of the local median family income.

On a recent windy afternoon, McCarver was standing between a pair of houses. On the left is a weathered bungalow, Minnie Harden's old house – she's passed on, but that's what everyone still calls it. On the right is a structure everyone calls the "Solar D." It was designed and built by UT School of Architecture students for the Solar Decathlon, a sustainable design contest in Washington, D.C., last fall. (They placed fifth.) The house is angular, glassy, and at about 600 square feet, very compact. Inside it's all honey wood and stainless steel: IKEA meets Metropolis magazine.

McCarver is no metrosexual – he's a tall, bearded gentleman of the talkative-Texan genotype – but he is a longtime fan of solar energy. The Blackland community center has a 12-year-old solar system that fuels six tiny cottages known as Robert Shaw Village, cutting electricity bills of the elderly residents by one-third. "Some of the people we work with have virtually no income," he said. "We want to keep their rent down, and also keep their utilities down."

The School of Architecture's donation of the Solar D house last fall created just that opportunity. The house is outfitted with a 46-panel, 8 kilowatt system capable of generating about 12,000 kilowatt hours each year. (By comparison, the average solar system in Austin is 2.8 kilowatts and generates about 4,200 kilowatt hours each year.) On an average Austin home consuming about 13,000 kwh of electricity a year, the Solar D system probably might not create much of a surplus, particularly because people tend to use more energy (via air conditioning) on the same sunny days that generate the most energy. But the Solar D is expected to run on about 3,000 kwh a year, leaving plenty of juice to share. (The savings come from super efficient appliances and windows, a heating system based on sun-warmed water, and the fact that the whole dang thing is airtight. McCarver likes to say that if you dropped it in the ocean, you could have yourself a fun little undersea expedition – at least until the air inside ran out.) So rather than sell the surplus back to Austin Energy in exchange for an energy bill credit, why not send it next door to directly cut the energy bills there?

Here's why not: a weird legal technicality. The Harden house and the Solar D house are on two tiny lots, with a property line between them. If that property line were not there, McCarver could hook one up to the other and that would be the end of it. (That's how the Robert Shaw houses all run off one system, for example.) But, because the property line is there, Austin Energy gets concerned. "When we hear about something like that," said Austin Energy attorney Bob Kahn, "It sounds like retail wheeling."

What the heck is "retail wheeling"?

Texas is divided into service districts, each served by a single electricity provider. Retail wheeling is when any other entity provides energy within that district, and it is illegal. The prohibition is to protect against unregulated generators running on something that might annoy the neighbors, like diesel. Austin Energy's concern is that if Blackland is allowed to transfer energy from one property to another, it would open the legal door to less endearing projects – although Kahn is careful to add that Austin Energy is still studying the issue and has no official position. "We're not trying to find a way to kill this thing," said Kahn. "This is first time we've had request like this, and I want to make sure we do it right."

Salvation may come in the über-modernist aesthetic of the Solar D house. When the first Austin Energy representatives went out to the site to investigate, they decided what they saw was (drum roll) not actually a house! Instead, it is a "structure with some solar panels on it." Perhaps the retail wheeling rules are different for shiny, angular, green-roofed, modularly constructed structures-not-houses? Kahn pointed out that when college or corporate campuses generate their own electricity for multiple buildings, that also is not considered retail wheeling. Perhaps the pair of homes should be designated some sort of campus? Finally, Blackland could join the two lots, build a breezeway between the two houses, call it a duplex, and share electricity to their hearts' content.

Whatever they come up with on Leona Street, McCarver will still be a bit glum. He had other brilliant plans in the works to connect the rest of the Blackland homes into a big, beautiful, solar-sharing system, and those plans now look pretty dim. "We may solve it on this particular pair of houses, but we've got 35 more," he said. 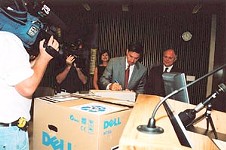