Tweet
print
write a letter
Arizona-based Taser International, maker of the widely used electroshock Taser gun, reported in fourth-quarter federal filings late last month a 98% drop in profits for 2005. The company's net income was just $1 million in 2005, down from $18.9 million in 2004, according to press accounts. The steep decline was precipitated by lower sales and higher costs – including nearly $7 million the company spent defending lawsuits filed in what company execs reportedly call the "war against Taser." Indeed, as Taser use has increased – about 8,500 police and other government agencies worldwide include Tasers among their arsenal – so has controversy over the weapon's use. Taser officials say 40 lawsuits were filed against the company in 2005; at year-end, 40 cases were pending, and 12 had been dismissed.

The seemingly frenzied acceptance of the Taser by police agencies has been met with equally frenzied skepticism and, at times, outright hatred by those who claim the Taser is more than a less-than-lethal police force alternative. Although some form of the weapon has been around for years, the modern version is not subject to government standard or regulation, and its health effects have not been studied (except in the most rudimentary manner) by the feds in more than two decades. So local governments (along with various advocacy groups) have been left to cobble together policies on Taser use (policies that are wildly disparate, according to a 2005 report by the federal Government Accountability Office), as well as to evaluate in medical reviews the health effects of the weapon's strike. While Amnesty International reports that more than 100 deaths can be linked to electroshock strikes, many medical professionals have been far more conservative in their assessments, and few – first among them a deputy medical examiner in Chicago – have actually ruled a Taser strike as cause of death.

Nonetheless, medical experts nationwide are beginning to qualify their often blanket approval of the weapon, noting that, perhaps, police might be well advised to restrain from using the weapon on suspects exhibiting so-called "excited delirium" – an agitated and paranoid state commonly associated with drug use, during which a person's body temperature typically spikes well above 100 degrees. Indeed, after an hours-long incident in September, 33-year-old Michael Clark died in police custody after being struck three times with a Taser. Deputy Medical Examiner Elizabeth Peacock reported that Clark had PCP and cocaine metabolite in his system and concluded that his death was caused by blood sickling brought on by excited delirium. Interestingly, she pointedly concluded that the three Taser strikes – two to Clark's chest and one to his arm – played no role in his death.

Still, some police agencies are now contemplating a possible link between ED-related deaths and Taser strikes. Notably, Nashville police announced on Feb. 20 that the department will revise its Taser policy to require 911 calls regarding certain types of agitated suspects be answered not only by police, but also by paramedics and police supervisors. According to the Associated Press, the newly adopted policy requires police to use a Taser with caution when confronted with suspects exhibiting ED. Instead of repeated Taser strikes, police are now advised to strike once (if necessary), then to move in and try to maintain control of the suspect in order to allow paramedics to come in and administer a tranquilizer shot, which, in turn, should allow police to place the suspect into custody using the least – and least deadly – amount of force. Corey Slovis, medical director for the Nashville paramedics, and chair of the emergency medicine department at Vanderbilt University, says the new policy is intended to save lives and protect police. "The few fatalities from excited delirium that have occurred seem to be consistent with not having enough medical attention early on," Slovis told the AP. "Tasers are generally safe," he continued. "Almost every adverse outcome has been in excited delirium cases." 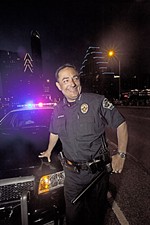