He Who Must Not Be Named Returns to TV News

Ron (mumble mumble) is back at the anchor desk

Tweet
print
write a letter
KEYE-TV began promoting the return of the anchor whose name cannot be spoken more than a month ago. Mysterious ads on the station warned viewers engrossed in Survivor that a "new news team" will appear on March 8, and it is going to be big – really, really big. But ask KEYE executives about the ads and they wail that they're forbidden to speak of this thing, this thing of which they dare not speak.

As any member of the dwindling clique that gives a crap about local TV news knows, the big event is hardly a mystery. March 8 will mark the return to the airwaves of veteran local anchor Ron Oliveira, who departed ABC affiliate KVUE last year and signed two months later with KEYE, the CBS affiliate. But under terms of a no-compete clause in his KVUE contract, KEYE cannot use him on the air, promote him, or use his likeness until March 8, when he will be free to once again read the news with conviction and a pleasantly stern demeanor.

This is a big deal in the realm of Austin TV news, considering Oliveira is the closest thing to an elder statesman in the industry. At KEYE he will reteam with former KVUE partner Judy Maggio, and together they will hope to recapture some of that ratings magic of yesteryear. With two anchors old enough to remember Richard Nixon, KEYE also will present a stark contrast to the youthful anchor bots manning the desks at the competition. Oliveira's replacement at KVUE is hunky 30-something Tyler Sieswerda, who reads the news with the blank stare of a bored fitness instructor.

Oliveira, who's been part of the Texas TV scene for 30 years, is the latest piece in KEYE's million-dollar effort to rebuild its news image. The station is counting on Oliveira and Maggio to brand their news effort and woo viewers – or at least those viewers who may not have been hooked by this week's "exclusive" sweeps-month report on massage parlors, complete with hidden camera video. (It turns out some massage parlors offer more than just a massage. Who knew?) Now it will be up to Oliveira to reflect the station's serious news stance when a reporter says he was offered a "hand job" by a masseuse.

To make way for Oliveira, Fred Cantú – another KVUE alumnus – is returning to mornings, where he found success at KVUE. "Uncle Fred" always seemed a tad uncomfortable delivering the daily reports of mayhem and sodomized roller-skating sheep, making the move something of a no-brainer. But KEYE has taken extraordinary steps to smooch Cantú, who always scores well in popularity polls. Even though the station never talks about contracts, after Oliveira was hired KEYE issued a press release announcing Cantú had signed a five-year extension. Last week, apparently worried that Cantú's fans will storm the streets to protest his demotion, KEYE's new state-of-the-art Web site included a "special message from Fred," assuring readers that he's not being bull whipped to the street. "You may be reading too much into spots promoting 'The New News Team,'" he wrote to his loyal minions. "I'm not going anywhere." He added, "I actually prefer working early hours," which might ring a wee bit hollow to those who seem to recall his glee at leaving mornings at KVUE.

After consulting with a lawyer, KEYE general manager Mike Reed declined to discuss Oliveira, who has been working at the station and doing fill-in work in Dallas for the past year. KVUE general manager Patti Smith also refused to comment on the anchor moves, except to emphasize that KEYE better not be talking about Oliveira. In the past Smith has denied that money was an issue in the departure of three veteran anchors, but any reasonable observer of the industry could easily assume that KVUE was saving a few bucks by going with younger, perkier anchors. But it's also possible that KVUE simply decided that the elder anchors weren't worth the money – KVUE continues to post strong ratings; KEYE's audience has steadily grown, but there was no huge shift when Maggio joined them. In fact, the local TV news superhighway is littered with newscasts anchored by news readers who were popular at one station, but bombed when they went across town.

"Judy Maggio and Ron Oliveira are perhaps the two most recognized anchor names in Austin today," said Kevin Benz, news director of News 8 Austin, Time Warner Cable's 24-hour news operation. "If you put them together that is compelling promotionally, but whether viewers will find it that way is hard to say."

At the very least, Oliveira's return raises the bar in the local news competition. "It's a very close race," said KXAN general manager Carlos Fernandez. "And that has great value to the viewer. When you have that kind of competition, you'll have everybody doing their best stuff."

The tortured English of KEYE's ads emphasize that this unnamed person and Maggio will make up "the most solid news team in town." And don't worry about trust, "they've already earned it," according to a KEYE promo. One particularly odd spot showed a man lamenting that he was going to miss his barbecue buddy, who was going off to do the news with Judy Maggio. "You know who he is," the actor drawls. At least, KEYE executives hope viewers know him, and, better yet, might actually forsake reruns of The Simpsons to watch him.

Taking the Pulse of Austin

TV news loves using meaningless man-on-the-street interviews to flesh out stories. So we went to the parking lot of a central Austin Wal-Mart to ask the local stations' target audience, "What do you think about Ron Oliveira switching to KEYE?"

Ramona, nurse (declined to give last name)
Which one was he with before? He left there because he was going to do bigger and better. And now he's back and so he wanted to be back in Austin, so he took what he could get.

Mike Staples, technician
I didn't know he was switchin'.

David Moreno, chef
I think he should have stayed where he was. I was used to seeing him there. You know we're creatures of habit. It's like going to a cafe where the ketchup has always been and they move it, and you're like, what the hell? You get used to something like that.

Beatrice Pena, administrative assistant
What do I think about it? He's moving from one to the other? It's his choice. It's a free country, I guess.

There you have it, folks – clearly, Austin is glued to their sets. 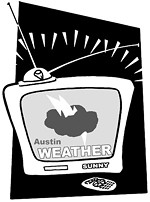