The Rise of McMansions

Those large-scale "starter castles" on postage-stamp plots of land bring two of the Austin City Council's most cherished ideals into direct conflict. 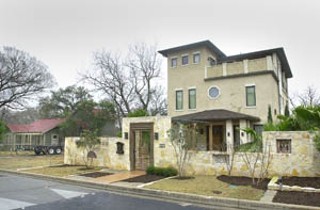 Oversized new homes such as this one in the Zilker neighborhood are the target of the "McMansion" ordinance. Supporters of the ordinance argue that houses such as this are out of character with older central city neighborhoods, as opposed to the expanded house on the left. (Photo By John Anderson)

After years of debate over the issue, the resolution of the McMansions issue was swift. Council directed, considered, and passed an interim moratorium on the overstuffed houses at its Feb. 16 meeting. That interim ordinance is expected to hold until early May, when an appointed stakeholders task force is expected to come up with a permanent solution to the problem.

If City Council has held fast to any credo over the last decade, it's the belief that inner-city density is good and suburban sprawl is bad, a principle reinforced at regular intervals by the Planning Commission, Save Our Springs Alliance, and the Sierra Club. That ideal utopia of Austin as a highly dense, highly walkable city has been easy for City Council to embrace because it has rarely been in direct conflict with Council's second tenet, which is to back neighborhoods' input on zoning issues whenever possible, a philosophy articulated by the rise of the neighborhood-planning process in Austin.

McMansions, however, have put both principles in the cross hairs. It's easy to support the dense Gables high-rise on Cesar Chavez as the ideal for downtown Austin when residential neighborhoods are blocks away. It's harder to turn away a tearful neighbor protesting the construction of a McMansion on Meredith Street because it, literally, blocks the sunlight from the windows in her Tarrytown bungalow. Incidentally, 49 homes have been torn down in Tarrytown in the last 13 months, most of them replaced with bigger buildings.

In the debate over McMansions, council is now faced with two very vocal, influential groups currently at loggerheads: developers and homeowners who want the right to maximize the value on their land by putting more density on a lot, facing off against neighborhood groups who consider the crush of those houses to be ripping apart the fabric of their charming cottage-style communities in the process.

The McMansion problem is not unique to Austin. As city planner Greg Guernsey noted last week, numerous cities have faced the backlash against McMansions, but few have agreed to pass ordinances. Three weeks ago, the Atlanta City Council, faced with the same types of opposition as Austin, refused to accede to demands for a McMansion moratorium in inner-city neighborhoods. Others, like Scarsdale, New York; Greenwich, Connecticut; and Fullerton, California have made tentative stabs at trying to limit density on residential lots.

Austin's interim solution, which came from council members Brewster McCracken, Betty Dunkerley, and Lee Leffingwell, limits the floor-to-area ratio (really the house footprint-to-lot ratio) to 40%. Replacement construction is limited to 2,500 square feet, and additions would be limited to no more than 20% above current floor space. A waiver from the city is possible, and the city has 10 days to respond to such a request. The interim rules, which apply to both homes and duplexes, are expected to be in force through the beginning of May when a longer-term ordinance will be ready and apply to permits in all neighborhoods built before 1974, when the watershed ordinance was put in place and limits were placed on lot density in subdivisions.

By agreeing to limits on new construction in both interim and permanent form, City Council is abandoning some of its commitment to inner-city density, and developers are not likely to let council forget it. As Robert Nash told the council two weeks ago, everyone has seen ugly, boxy houses. But developers who can build attractive development, compatible with the community, should not be penalized for those mistakes.

"What's happening with this moratorium is that you are basically clubbing everyone over the head with the same two-by-four, regardless of whether or not they have done the right thing, so I would really urge you to consider [the] impact of what you are about to pass," Nash said. "The other important thing I think that you have to realize is that land value is land-use driven. A little tiny piece of land you can build the Frost Bank on is a whole lot more valuable than that same piece of land you can only graze cows on."

Neighborhoods, on the other hand, consider denser development – especially when it comes in the form of a mini dormitory for UT students – to be diminishing the value of their own property. Joseph Parker, pastor of David Chapel Missionary Baptist Church, told council last week that the Chestnut neighborhood's willingness to be flexible during the neighborhood planning process had led to large-scale construction on lots with no parking, poor construction, and little character.

"When we started out, we had vacant lots that were spoiled, and now we see these lots in Chestnut and throughout East Austin with what could be called oversized dormitories owned by absentee landlords," Parker said. "There may be a drainage problem in parts of Austin, but drainage is not the only reason this moratorium was put in place. In my judgment, it's time we pause and take count of what we want for the future."

That future, which will be considered by the task force appointed by council last week, could be to say "yes" to density, but only density in certain areas of the city, a strategy that appears to have worked well for the University Neighborhood Overlay. The Planning Commission added a number of issues to consider in its recommendation to council, such as the use of impervious cover on a lot rather than floor-to-area ratio, new compatibility standards for larger structures, and the ability for neighborhoods without a neighborhood plan to put limits on construction. As McCracken put it at the Feb. 16 council meeting, "We do have a responsibility. In many ways, one of our responsibilities is to leave this place better than we found it. Hopefully we are taking a measured approach from folks with different viewpoints who will work together for the community in goodwill. Do that, and we will look back and be proud that we took these steps tonight."