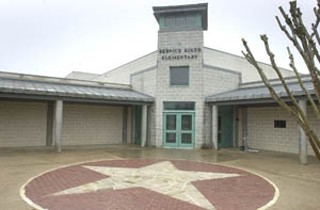 AISD's agreement with the city would allow Kiker Elementary to expand to 38% impervious cover. (Photo By John Anderson)

UT vs. A&M. Ali vs. Foreman. Snowboarder vs. hubris. To the annals of great rivalries and lingering conflicts, Austin has added one of its own: environmentalists vs. public schools. This is the odd faceoff that occurs every time AISD proposes to build or expand schools in environmentally sensitive Southwest Austin: Environmentalists complain that AISD shouldn't build schools in the Barton Springs watershed because it encourages people to live there. AISD policy has typically been to point to the people already living there, shrug, and build the schools anyway. (For the record, AISD did relocate two planned schools to less sensitive areas, and has sweetened the bitter pill of southwest schools by building them in accordance with Austin's water-quality regulations.)

The issue emerged once again this week when City Council approved a plan allowing at least three new AISD schools to exceed the impervious cover limitations laid out in Austin's Save Our Springs ordinance, which protects the Edwards Aquifer and Barton Springs by limiting the percentage of land that can be covered with asphalt, rooftops, or other impervious surfaces. The agreement also reserves AISD the grandfathered right to build two future schools at up to 50% impervious cover, although AISD insists it would never do such a dreadful thing. Moneywise, the agreement is good for AISD, because it allows the district to buy less land to build the same amount of school, a mighty tempting proposition in today's helium-filled land market. PR-wise, it's not so good: As the agreement has worked its way through the innards of city bureaucracy, it has caused some grumbling that AISD is trying to weasel out of SOS, which is up there with "covet thy neighbor's ass" on the list of things thou shalt not do.

The extent to which the agreement is weasely, however, depends on how you look at it. No plans currently exist to build on the sites with 50% cover. The three schools AISD does plan to build are on land covered by agreements with individual developers who, pre-SOS, bought up huge swaths of Austin's southwest, had huge piles of money, and had every indication of pouring the latter into developing the former, SOS or no. These so-called Stratus and Bradley agreements allotted space for school sites on which AISD is allowed 25% impervious cover (rather than the orthodox 15%) because the developers would offset the extra cover with open space elsewhere.

"These agreements were approved by council with the understanding that they met the overall intent of the Save Our Springs ordinance on a cumulative basis," said Pat Murphy of the city's watershed-protection department. "In other words, it clustered the development on certain sites and offset that with open space on other sites."

The Land Development Standards Agreement also allows AISD to add on to Kiker Elementary, which is not covered by one of these other agreements. Replacing eight portable classrooms with an eight-classroom addition would increase the overall impervious cover to a very unkosher 38%. So, the agreement has AISD paying the city $230,400 to buy 96,000 square feet of land elsewhere that will remain undeveloped. This will reduce the percentage of IC on the two sites as a whole to that magical 15% mark, and add about two football fields' worth of open space to Austin's green portfolio. Hopefully AISD will find a way to put it to some sort of educational use.

All that being said, AISD insisted that it would follow SOS when it was selling the bond, and if you're a purist, that's a slightly different thing than meeting the overall intent of SOS through alternate means. This isn't the first time AISD has used rhetorical subtlety to maybe/maybe not meet commitments made while selling voters on the $519.5 million school bond Austin passed in 2004. Last fall, for example, Superintendent Pat Forgione lost himself some friends in a nasty fight over whether AISD's promise to provide market-average "compensation" to workers on bond-funded projects meant wages only, or wages plus benefits. Fairly or not, if you were already grumbling that AISD plays loosey-goosey with the truth, the development agreement will probably add some kindling to that particular marshmallow roast.

The agreement also adds fuel to AISD's biggest bonfire at the moment: the proposal to close three underenrolled schools. While SOS Alliance's opposition to the agreement was limited to the two sites with 50% cover, Brad Rockwell of SOS Alliance argued that AISD should keep center-city schools open, even when they're half-empty, as a way to encourage people to live closer in. In particular, Rockwell urged AISD to grant a three-year stay of execution to Becker Elementary in Bouldin Creek so the community can find ways to fill the school's halls.

"To me [the underenrollment is] an indication that AISD is not meeting the educational needs of central Austin," he said. "They are not building schools, they are not maintaining schools in a way that makes them attractive and appealing to people living in the neighborhoods."

AISD sees it as an indication of something else: that people with small families are replacing people with large families in central-city neighborhoods. Plus, the logical argument that creaky schools drive away parents doesn't hold up so well in real life – many of AISD's most desirable schools (as measured by the number of transfer students they accept) are among its oldest, such as Pease, built in 1876, and Lee, built back when you could still name a school after Robert E. himself (1939, in case you're curious). As AISD moves toward a decision on the school closures on Feb. 27, however, the district can no doubt expect to hear a thing or two about those shiny new schools sitting on environmentally sensitive land, and what they say about AISD's commitment to Central Austin.