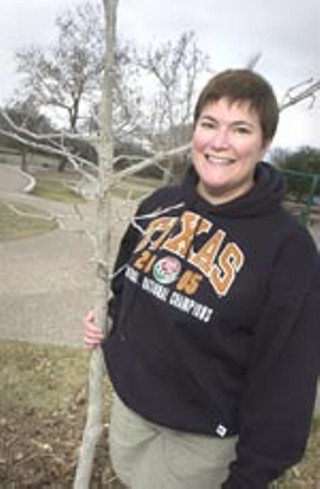 If a tree falls in Austin and no one replants it, does our shady city gradually turn into Kansas? Many in Austin don't want to wait to find out. As development fells many a noble oak, and as elderly specimens gradually pass into the great green forest in the sky, it's likely that the region's overall forest cover is declining. The solution is to plant more trees, a goal the city of Austin says it embraces as tightly as any patchouli-scented bohemian at an Earth Day rally. Staff point to Austin Energy's NeighborWoods program, which has provided some 11,000 trees for individuals to plant along city rights-of-way, and the parks department's volunteer forestation days, which put hundreds of spindly young sprouts in public areas.

Others aren't so sure. Hurricane Rita could hardly have ruffled more feathers than did a recent attempt by Austin Energy to remove trees in neighborhoods north of UT. Council took up the issue this week, drawing a couple dozen activists to City Hall. The energy utility defended its need to provide safe electricity, explaining that if a tree falls in Austin, it will probably make a very big sound as it takes out a power line, squashes, and/or electrocutes something, as well as leaves nearby neighbors in the dark. Council passed a resolution (predictably) to create a task force (of course) to study Austin's tree management (ta-dah!). Areas of inquiry will include whether Austin Energy's contractor was indeed a little too happy with the clippers, whether AE could do more to stock the streets with more dramatic shade species instead of rinky-dink wimpy ones, and analysis of better ways to prevent tree vs. safe power line conflicts in the first place, such as burying lines.

The parks department faces criticism of its own: Last year it bailed on four of six planned tree-plantings, leaving volunteers in the lurch. The most recent was on the weekend of Martin Luther King Jr. Day, when neighborhood activists planning Saturday morning events at Givens and Bartholomew parks found out Friday that the city, uh, sort of didn't have any trees. With the help of TreeFolks, an urban forestry nonprofit, the neighbors were able to rustle up some replacement trees from TreeFolks' nursery, but only after much frantic phone-calling and you'll-have-to-talk-to-my-supervisor-ing to get the switcheroo through the bureaucracy. (The city says the four plantings were disrupted for reasons outside of its control – wet weather, delayed construction, and, in the most recent case, the supplier simply not delivering promised trees – but PARD's Stuart Strong said the department would "review its procedures" to make sure participants are aware of necessary cancellations sooner.)

As is often the case, all the hullabaloo has focused attention on a long-simmering problem: a need for a coordinated plan to manage the urban forest. Shade cover, after all, is an issue that affects us all, as trees reduce air conditioning costs, manage storm water, and generally help mitigate the urban "heat island" formed by too much sun bouncing off too many dark and shiny surfaces. Austin Energy and its tree-killing machine may be an easy target, but it's not the only force thinning our trees. Thus, the Urban Forestry Board has recommended that City Council approve a tree inventory that would use the same geographic information system program used by other city agencies to measure what's growing where. That way, the city can know whether invasive ligustrums are devouring Travis Heights, or foresee the impending demise of a generation of sycamores and ash trees planted en masse by 1950s developers and now reaching the ends of their lives. Ideally, it would also help the city to smoothly coordinate with citizens willing to wield a shovel or haul some mulch. "The urban forest has to be owned by the community," said Tim Mahoney of the UFB. "There has to be an ongoing structure where people can demonstrably show their care for the urban forest and get results from that concern."

After all, the city gets the most bang for its tree-planting buck when it inspires individuals to plant and care for more trees on their own. "The greatest impact of those trees [planted each year] is the thousands of people we have face time with," said Scott Harris of TreeFolks, which has a nursery of thousands of trees and coordinates dozens of plantings throughout the year. "The trees aren't incidental, but the education is really the big deal." To find a tree-planting event near you, visit www.treefolks.org.