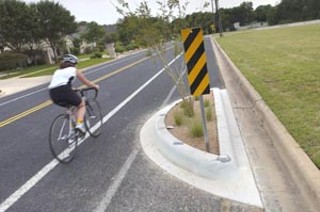 The infamous and much-ridiculed "Frankencurbs" along Shoal Creek Boulevard will soon be jackhammered into oblivion. (Photo By John Anderson)

In the ongoing melee surrounding how to best accommodate the users of Shoal Creek Boulevard – who include scores of bicyclists, walkers, and joggers – the city's Land Use and Transportation Subcommittee finally handed down a decisive death sentence to the street's controversial "frankencurb" islands, installed last May to calm traffic and keep motor vehicles out of a 10-foot shared bike/parking lane. Public Works Department Director Sondra Creighton said the curb islands will be removed in about a month. The subcommittee – comprised of Council Members Brewster McCracken, Betty Dunkerley, and Lee Leffingwell – also voted to put in sidewalks along the boulevard, and to mercifully relocate the construction of several traffic pilot projects, proposed by McCracken, to a different but similar street.

However, with the removal of the frankencurbs and the subcommittee's vote to leave the road's striping as is, resulting in a 10-foot driving lane and a 10-foot shared use (both bicycles and parked cars) lane on each side, cyclists are not only incensed by the lack of striped bike lanes, but by the dangerous possibility that motorists might mistake the shared-use lane for a driving lane. Bike advocate Michael Bluejay, who spoke in favor of bike lanes at the meeting, said the vote shows that in the minds of the subcommittee "motorist convenience trumps cyclist safety." The subcommittee justified selecting the current striping pattern based on a survey of area residents conducted last October by Public Works staff, in which voters narrowly chose variants of the current striping over another option which restricted parking to one side of the street and included car-free bike lanes. A majority of cyclist and cyclist-resident voters chose the bike lane option, however, which has been city staff's recommendation throughout the five-year process. Before moving to approve the as-is striping, Leffingwell asked for reassurances that "nothing prevents us from changing to another striping plan" in the future. Creighton said the full council is expected to weigh the subcommittee's vote and approve a final striping plan at its March 2 meeting.