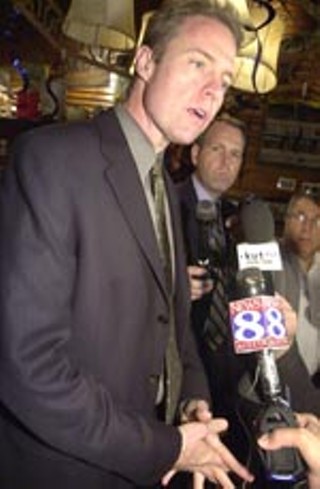 The Texas Democratic Party got its groove back Tuesday night, if only temporarily, in a Valentine's Day rout that had Republicans seeing red as they watched their lock on House District 48 slip further away with every precinct return.

Democrat Donna Howard took the lead from the get-go, with early vote returns handing her a solid 10-point-plus margin over GOP rival Ben Bentzin, a spread which eventually grew to 16 points in the final 58% to 42% tally. The Republican loss was especially bruising given that Bentzin had raised in excess of $300,000 more than Howard, thanks to sizeable contributions from two of the GOP's most influential investors in the state Legislature – school-voucher proponent James Leininger and homebuilder Bob Perry. Shortly after 9pm, Bentzin telephoned Howard to concede the race and – at least until the two meet again in November – to congratulate her on her win. "It was a very pleasant call," Howard said later. "He was very cordial, very gracious." Bentzin attributed his disappointing loss to a Democratic base energized by Howard's near-victory in the Jan. 17 election, when she came within 73 votes of an outright win over Bentzin and two other opponents.

After that, an army of volunteers, including a dedicated network of teachers and UT students, pitched in to get out the vote for Howard, while Bentzin resorted to placing a newspaper ad and offering to pay workers $11 an hour to hang campaign material on doorknobs.

Howard believes voters were turned off by the GOP's negative media blitz in the final days of the campaign as well as the current Republican leadership, which has failed in several attempts to pass a school-finance bill. Howard will represent the district in a special session on school-finance this spring. Throughout her campaign, Howard consistently stuck to her "positive change" message, while letting other Democrats hammer Bentzin on his support for tax-funded private-school vouchers and his recent admission that he had hired indicted political consultant John Colyandro in his unsuccessful Senate race in 2002.

"This is a community that wants to take care of its children and its schools," said Howard, a former Eanes school board member and critical-care nurse. The district's former representative, Republican Todd Baxter, voted in lockstep with the Republican leadership – that is, pro-voucher and anti-choice – instead of reflecting the moderate views of the generally GOP-leaning district.

The West Austin Democrats had tapped the HD 48 race as a top priority this year, said club president Hunter Ellinger. The Republicans, he said, "spent a ton of money and almost doubled their vote in the run-off, so the real story here is, why is it that they still can't turn out people to vote?" Ellinger scoffs at GOP attempts to spin Tuesday's results as just another liberal Travis County stunt. "This is the most establishment district you can think of," he said. "It's conservative establishment and it's liberal establishment. It's Karl Rove, it's Liz Carpenter. But it's mostly a Republican district that is pro-public-schools."

Ellinger spent Tuesday night assembling a functional analysis of precinct-by-precinct returns and comparing them to past elections (posted on the West Austin Democrats' Web site, www.westaustindemocrats.org) "Just looking at the precincts, there were some Republicans who voted for Donna," he said, "but I think for the most part that the people who are willing to go vote for Bush are now so disgusted with [Gov. Rick] Perry and the others that they just stay home." On that point, even while Bentzin's 9,281 vote total was 81% higher than last month's election, it still wasn't enough to pull him out of his January slump, Ellinger said. "That would almost always be enough to win a run-off, but Howard increased her vote by 88%." Indeed, the overall turnout was a surprisingly high 22.24%.

State Democratic Party leaders view Tuesday's outcome as a very loud statement that voters are fed up with the folks running the state Capitol. In a statement, state party chairman Charles Soechting said, "As Democrats are working to earn the trust of Texas voters, we will offer more candidates like Donna Howard, whose abilities and independent leadership allow them to serve all the voters they represent instead of a narrow partisan agenda." With the HD 48 special election in the bag, Democrats now turn their attention to another special election – this one Feb. 28 in Dallas County, where Democrat Katy Hubener hopes to replace Republican Rep. Ray Allen, who, like Baxter, took an early leave from office to take up lobbying for a living.

The Rise of the Invisible Man
Can longshot Democrat Chris Bell ring up a miracle?