After day of testimony from psychologists and counselors, district judge rules Marcus McTear has no chance for early parole 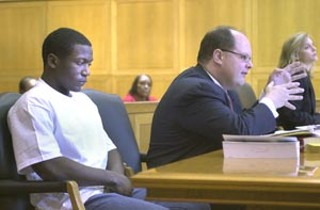 Marcus McTear (left) with his attorney in court last week; the teenage killer of Reagan classmate and ex-girlfriend Ortralla Mosley was transferred from juvenile prison to incarceration with the Texas Department of Criminal Justice. (Photo By John Anderson)

Nineteen-year-old Marcus McTear will be transferred to adult prison this week, to serve out the remainder of the 40-year sentence he got for stabbing to death his ex-girlfriend, 15-year-old Ortralla Mosley, in a Reagan High School hallway in March 2003. After a day filled with the testimony of psychologists and counselors from the Texas Youth Commission's Giddings State School, each of whom told the court that McTear was not doing well in the school's Capital Offenders Program, on Jan. 26 District Judge Jeanne Meurer ruled that McTear had lost any chance for an early parole. "Perhaps you thought [that] at the Texas Youth Commission you were a big fish in a little pond," Meurer told McTear. "That will no longer be the case."

On March 28, 2003, one day after Mosley ended their six-month relationship, a distraught McTear came to school armed with two knives and attacked Mosley, stabbing her six times in the head and chest, killing her. McTear pleaded "true" – the juvenile court equivalent of guilty – to killing Mosley in June 2003, less than a week after Meurer declined the state's bid to certify McTear to stand trial as an adult. Instead, Meurer handed McTear a 40-year determinate sentence, meaning that, had he done well in TYC, he would have had a chance at parole before being transferred to a Texas Department of Criminal Justice adult prison. But McTear lost that chance last week when Meurer granted the state's request for an early transfer to the adult system. Although McTear did well in both the educational and behavioral portions of the Capital Offender Program – a counseling-intensive program for juveniles found guilty of violent offenses – he did not do well in the correctional portion of the program, during which offenders are expected to take responsibility for their crimes and are challenged to identify and modify behaviors and thought processes contributing to their crimes. McTear was put on program probation in March 2005, and in April was kicked out of the COP, Ann Kelly, the former director of treatment programs at Giddings State School told the court. Kelly said that McTear was "defensive" during counseling sessions, violated program rules by engaging in relationships with girls in the program – by finding ways to pass letters back and forth – and didn't appear to have "any noticeable level of internal anxiety" about killing Mosley. Even after McTear was told that he was being placed on probation, and knew he was in jeopardy of being expelled from the program, he continued to violate the rules by keeping up his pen-pal relationships with female students. In fact, she said, the letters' content "suggested [that he was] continuing to struggle with appropriate relationships," and that he has a "tendency to want to maintain power and dominance over … females."

Although McTear's attorney, John Evans, tried to convince the court that McTear deserves one last chance in the COP program, TYC associate psychologist Michael Hilgers testified that he doesn't think McTear has the "ability" to complete the rehabilitative program. "[Don't] you think this hearing could serve as a wake-up call for Marcus [to take the program more seriously]?" Evans asked Hilgers. "I think it comes down to a question of ability," Hilgers responded. "I think he'd certainly say he wants to do better … [but] I'm not sure that he can. I think being put on probation in the [COP] should've been a wake-up call; getting a 40-year determinate sentence should've been a wake-up call. … So, I don't know how well he responds to wake-up calls."

Meurer's decision to transfer McTear to adult prison was a relief to Carolyn Mosley, Ortralla's mother. Back in 2003, Mosley supported Meurer's decision to send McTear to the TYC, and now, she said, she supports Meurer's decision to transfer McTear to prison. "It's a relief," she said. "I felt sick" before and after last week's hearing, and now feels "a little bit of closure." While Ortralla's death still haunts her, Carolyn Mosley says she is working to ensure that Ortralla's spirit will live on. In November, she filed papers with the secretary of state, officially incorporating the Ortralla Lu Wone Mosley Foundation, an organization that will provide a safe haven for adolescents dealing with dating violence. The foundation will offer housing, counseling, resources, and services – including day care, transportation, and job placement – for adolescent girls and boys who need help. Austin State Rep. Dawnna Dukes has agreed to serve on the foundation's board of directors, and both First Lady Anita Perry and television talk show host Montel Williams have promised support, Mosley said. The foundation will be headquartered in Austin, she says, but eventually she hopes to open other locations – a string of "safe havens" – across the state. "If you need counseling, you can come; if you need a place to stay, you can come," she said. "This is a place where you can come to mama. This is not just a business to me. This is my daughter. There's so much I want to do – and so much that needs to be done." (For more information on the Foundation, or to offer suggestions or donations, write to the Ortralla Lu Wone Mosley Foundation, PO Box 381000, Duncanville, TX, 75138.)